Swedish media is reporting air traffic problems due to "solar storm" interfering with air traffic control radar systems during the afternoon of November 4, 2015. It is unclear, however, whether they meant the Solar Radiation Storm or Geomagnetic Storm, two very different things.

According to Aftonbladet.se, the problems at some Swedish airports started around 14:30 UTC (15:30 local time in Sweden), when radar screens stopped showing airplanes, and lasted for about 1 hour.

Ulf Wallin, press spokesperson at Swedavia, the organization managing Sweden's airports, told TT that affected airports were Landvetter in Gothenburg and Arlanda and Bromma in Stockholm. As a result, no aircraft were allowed to take off from airports in southern and central Sweden.

"Those airplanes that are in the air are allowed to land at the airports they're going to, but no planes are taking off," he said.

The situation started normalizing after about 1 hour and at 16.00 UTC (17:00 local time) airplanes were allowed to land. It was not known when airports would be operating at full capacity again, said Per Fröberg, press spokesperson for Luftfartsverket, responsible for air traffic control in Sweden.

According to TheLocal.se, the Swedish Armed Forces said its own systems had not been affected.

Earth is under the influence of coronal hole high speed stream (CH HSS), which is causing G1-Minor geomagnetic storms around the poles since early November 3. This kind of 'storms' are commonly referred to as the "solar storms", but this is not quite precise terminology and often the cause for confusion. If you go to Twitter and search for #solarstorm, you'd get a lot of images of one of the geomagnetic storm effects – auroras.

It would be so much better if we all used the precise terminology to describe such events. For example, the NOAA Space Weather Scales, were introduced as a way to communicate to the general public the current and future space weather conditions and their possible effects on people and systems. The scales describe the environmental disturbances for three event types: geomagnetic storms, solar radiation storms, and radio blackouts. The scales have numbered levels, analogous to hurricanes, tornadoes, and earthquakes that convey severity.

Under G1-Minor geomagnetic storm conditions (today), weak power grid fluctuations can occur, minor impact on satellite operations is possible, migratory animals are affected at this and higher levels, and aurora is commonly visible at high latitudes. 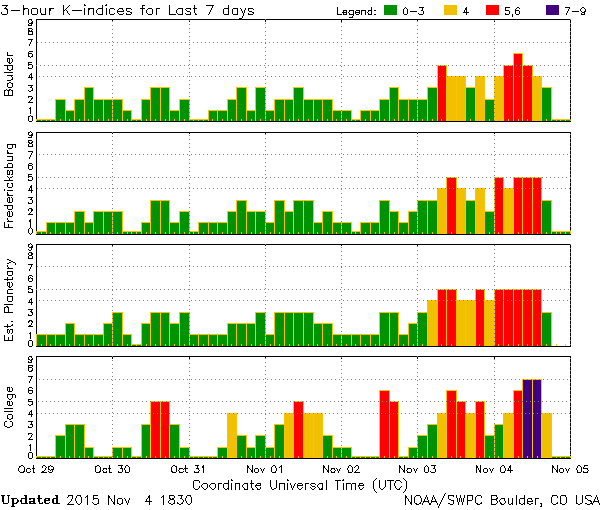 It is interesting to add that a long duration solar flare measuring M3.7 at its peak erupted from geoeffective Region 2443 at 13:52 UTC on November 4, 2015, which almost coincides with the the time when airport interruptions in Sweden were reported.

The flare event started at 13:31, ended at 14:13 UTC and caused an R1-Minor Radio Blackout Impact. Practically speaking, a Radio Blackout is the absence of a capability to communicate on High Frequency bands in the 5 to 35 MegaHertz spectral range, but lower frequency radio communications may also be significantly degraded during a Radio Blackout event.

Coronal Mass Ejection (CME) was produced by the M3.7 solar flare event and SWPC expects it to impact Earth on November 7, 2015. You can read more about his particular solar event here. 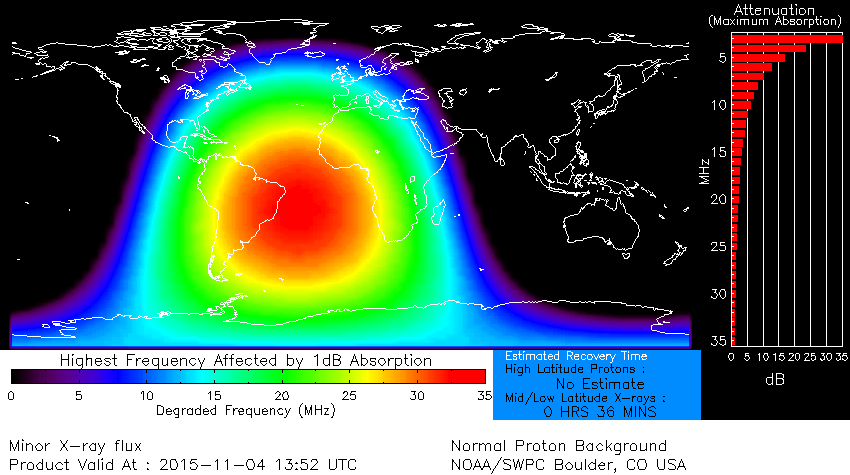 And to add more twist to the story, a 10cm Radio Burst was recorded starting at 14:21 UTC. It reached maximum time at 14:25 (180 sfu – solar flux units) and ended at 14:33 UTC. This can be indicative of significant radio noise in association with a solar flare. This noise is generally short-lived but can cause interference for sensitive receivers including radar, GPS, and satellite communications.

In their 12:30 UTC Forecast Discussion, SWPC said that the greater than 2 MeV electron flux (energetic particle) is expected to be at normal to moderate levels on November 4, with high levels likely from November 4 – 6 in response to elevated solar wind speeds from the coronal hole high speed stream (CH HSS). The greater than 10 MeV proton flux (energetic particle) is expected to remain below S1-Minor (Solar Radiation Storm) levels from November 4 – 6.

Dr. Tamitha Skov had an interesting set of tweets regarding TheLocal.se article quoted above. The terms in the article were misused, but the fact remains that airport radars in southern and central Sweden were not operating properly from around 14:30 to ~16:00 UTC.

Xx! This text is all wrong. #Solarstorms, #solarflares, & #geomagneticstorms are NOT the same. 3 distinct phenomena! https://t.co/r0kYVFL2JU

THX!! Peak of M3.7-flare happened at 13:52 UTC so the flare had an effect, but its likely the combination of both! https://t.co/ZKC8zlPK0V

Meanwhile, SpaceWeather.com reports the current solar wind stream (the thing causing the Geomagnetic Storm) is "unusual not only because it is very fast (700+ km/s), but also because it has a series of shock waves or 'transients' embedded in it – at least 3 so far."