A previously unknown part of the Milky Way galaxy has been uncovered by using the VISTA telescope of European Southern Observatory's (ESO) Paranal Observatory. The newly discovered component contains a disk of young stars lurking behind a thick cloud of dust in the central bulge, ESO announced on October 28, 2015.

VISTA telescope at the ESO's Paranal Observatory has been used by the astronomers to take multiple infrared images of the central part of Milky Way at different times. Researchers have used the data gathered in the period between 2010 and 2014 to make this amazing discovery.

"The central bulge of the Milky Way is thought to consist of vast numbers of old stars. But the VISTA data has revealed something new — and very young by astronomical standards!" said Istvan Dékány of the Pontificia Universidad Católica de Chile, the study's lead author.

This video shows the locations of the newly discovered Cepheids (red dots) in an artist’s rendering of the Milky Way. Video credit: ESO/Microsoft Worldwide Telescope

A team of researchers has used the data obtained by the VISTA telescope during ESO's Via Láctea public survey to map put the locations of the so-called Cepheids stars, variable in brightness. These stars expand and contract cyclically and by doing so, their brightness changes significantly during one period.

A period between increased brightness and fading is longer for brighter Cepheids and shorter for the darker ones. This relationship was established in 1908 by the American astronomer Henrietta Swan Leavitt, and remains to this date one of the most accurate ways of mapping the positions of distant celestial objects across and beyond our Galaxy. 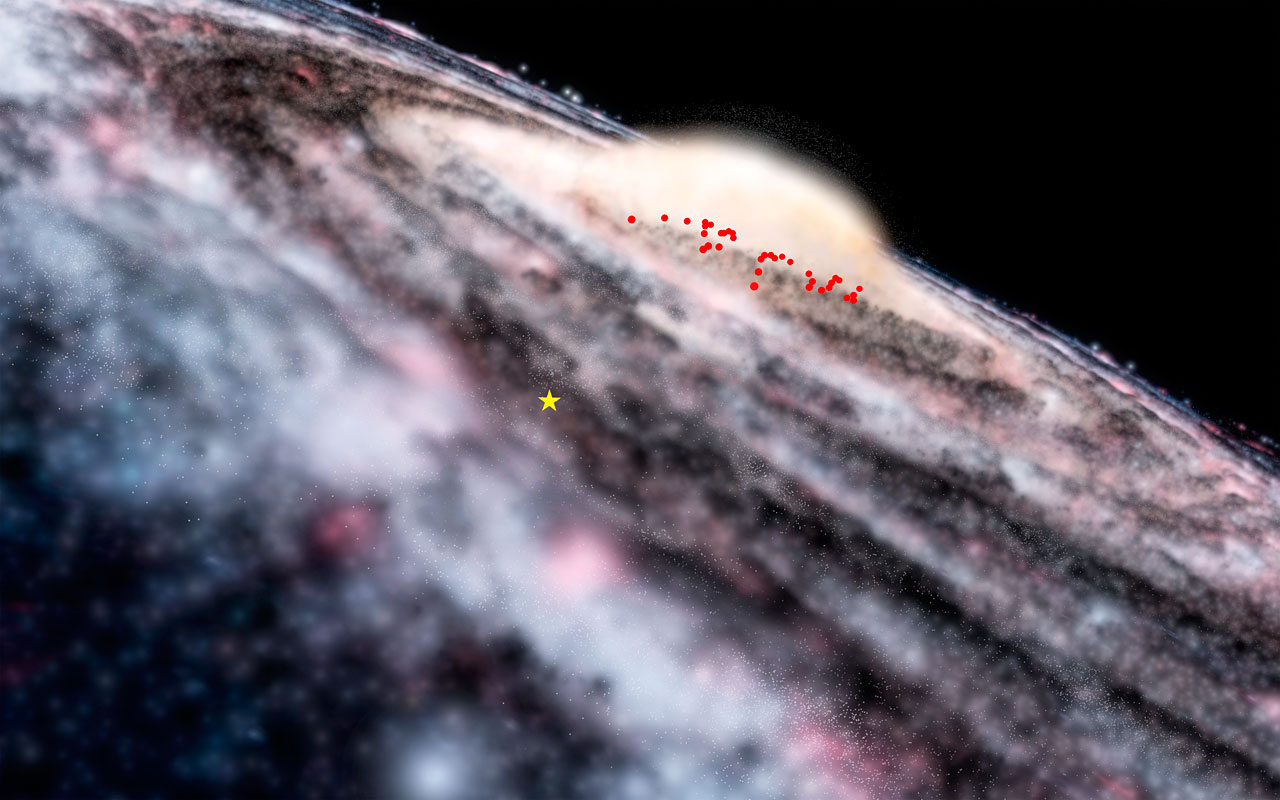 This diagram shows the locations of the newly discovered Cepheids in an artist’s rendering of the Milky Way. The yellow star indicates the position of the Sun. Image credit: ESO/Microsoft WorldWide Telescope

The astronomers found 655 candidates for Cepheid type of stars, and 35 of them have been identified to belong to the class of classical Cepheids, the young bright stars, clearly standing out of the older inhabitants of the Milky Way.

"All of the 35 classical Cepheids discovered are less than 100 million years old. The youngest Cepheid may even be only around 25 million years old, although we cannot exclude the possible presence of even younger and brighter Cepheids," said Dante Minniti of the Universidad Andres Bello, Santiago, Chile.

The young age of the stars proves that a previously unknown, continuous supply of newly formed stars into the central Milky Way region, existed for the last 100 million years.

Another huge discovery was a thin disc of young stars, wrapped in thick cloud of dust, across the galactic bulge.

"This study is a powerful demonstration of the unmatched capabilities of the VISTA telescope for probing extremely obscured galactic regions that cannot be reached by any other current or planned surveys," said Dékány.

"This part of the galaxy was completely unknown until our VVV survey found it," added Minniti.

Further investigation is required to examine the origin of discovered Cepheids. Understanding their fundamental properties, interactions, and evolution is key understanding the evolution of the Milky Way, and the process of galaxy evolution as a whole.

Featured image: The location of the newly discovered Cepheids in an artist’s impression of the Milky Way. The yellow star indicates the position of the Sun. Image credit: ESO/Microsoft WorldWide Telescope