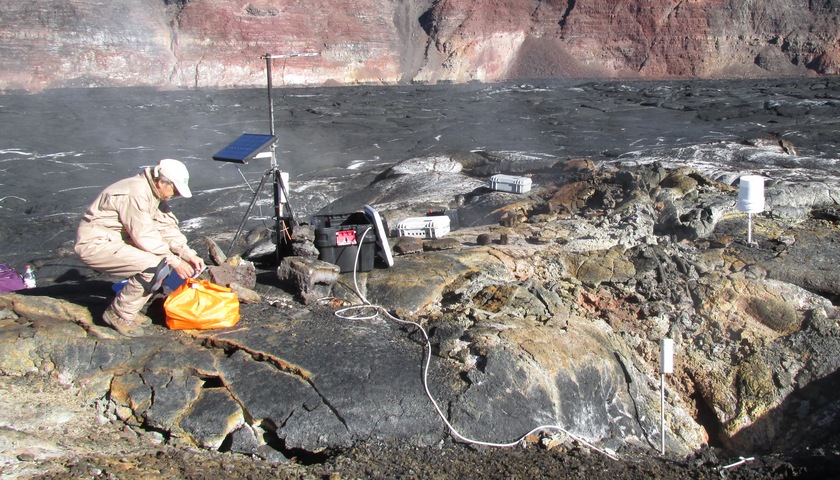 The Hawaiian Volcano Observatory (HVO) announced on September 17 they are elevating the Mauna Loa volcano alert level to Advisory and the aviation color code to Yellow due to elevated seismic activity under the volcano. This increase in alert level does not mean that an eruption is imminent or that progression to an eruption is certain.

For at least the past year, the rate of shallow earthquakes has varied but overall has remained above the long-term average, the agency said.

"During this same time period, measured ground deformation is consistent with recharge of the volcano’s shallow magma storage system. Together, these observations indicate the volcano is no longer at a background level of activity.

Shallow earthquakes are occurring in locations similar to those that preceded Mauna Loa's two most recent eruptions in 1975 and 1984; however, the energy release of the recent earthquakes remains comparatively low. The current rate and pattern of ground deformation is similar to that measured during inflation of Mauna Loa in 2005, an episode of unrest that did not end in an eruption.

It is possible that, as in 2005, the present heightened activity will continue for many months, or even years, without progressing to an eruption. It is also possible that the current unrest is a precursor to an eruption, as was the case prior to eruptions in 1975 and 1984. At this early stage of unrest, we cannot determine which of these possibilities is more likely." 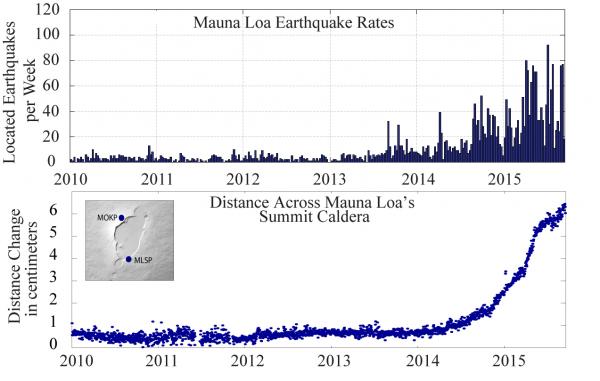 Bottom: Change in distance across Mauna Loa's summit caldera between 2010 and September 17, 2015. Blue dots indicate the relative distance between two stations that span the summit caldera of Mauna Loa, shown in the map on the upper left. Sustained extension across the caldera started in mid-2014. This extension is one of the indicators of magma infilling a complex reservoir system beneath the summit and upper Southwest Rift Zone.

Mauna Loa, the largest active volcano on Earth, last erupted in 1984. Since 1843, the volcano has erupted 33 times with intervals between eruptions ranging from months to decades, according to HVO.

Its eruptions tend to have large eruption rates compared to Kīlauea, producing voluminous, fast-moving lava flows that can impact communities on the east and west sides of the Island of Hawai`i. 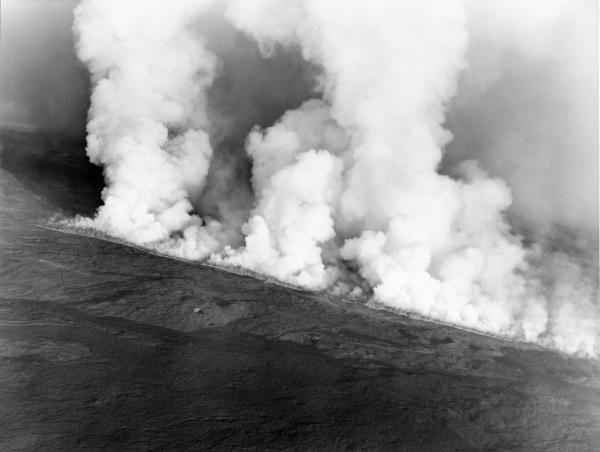 On June 1, 1950, a 2.4-km (1.5 mi) long fissure erupted high on Mauna Loa's Southwest Rift Zone at 9:04 p.m. Minutes later, the roar of lava fountains could be heard up to 24 km (15 mi) away. Within three hours, an ʻaʻā lava flow crossed the main highway on the west coast of the Island of Hawaiʻi and inundated the village of Pahoehoe (all villagers reached safety unharmed, but, for some, it was a close call). Thirty-five minutes later, lava entered the ocean, creating billowy clouds of steam that rose 3,000 m (10,000 ft) into the air. This Mauna Loa eruption destroyed about two dozen structures and cut Highway 11 in three places, burying more than 1.6 km (1 mi) of the road, before ending on June 23. This aerial photo shows the erupting fissure early on the morning of June 2, 1950. The glow from it could be seen all the way to Oʻahu.