Severe rainstorms accompanied with strong winds caused severe flooding and mudslides along the Mediterranean coast of France, on August 23 and August 24. Major flash-floods caused traffic disruption across the affected areas, and killed 3 people, so far.

In southern France, heavy rainfall caused three people to die. Two of them, an elderly couple, died in an accident in Montpellier, in the Languedoc-Roussillon region, as their car was swept away by flood water, the French Civil Protection authorities reported. Major traffic disruptions were also reported across the affected areas in the region of Languedoc.

One other person was reported dead in Thiezac, in Cantal department, as an uprooted tree fell over the passenger's caravan. 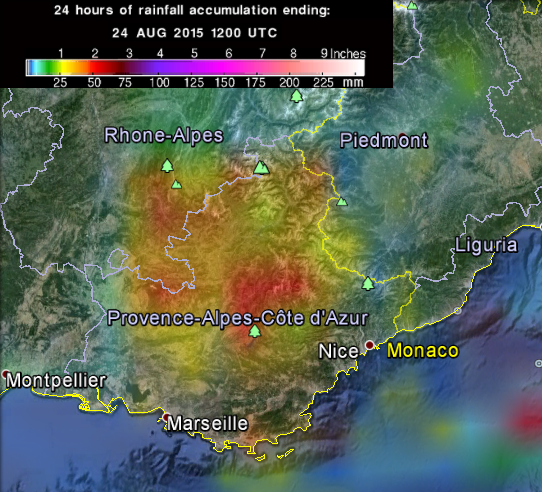 Severe weather also caused the railways to shutdown across the affected areas. A high speed TGV has been forced to stop, and 250 passenger had to evacuated due to a mudslide caused by the severe rainstorm.​

Meteo France issued orange alerts on August 24, as more heavy rainfall could cause more flooding in parts of south-eastern France. At the same time, the central-western part of the country, including departments of Loire-Atlantique, Vendée, Indre, Vienne, Deux-Sèvres, Charente-Maritime, Maine-et-Loire and Indre-et-Loire, remains under the influence of strong winds.