Severe thunderstorms accompanied by powerful wind gusts hit the Gard department in Southern France on the morning of Tuesday (LT), September 14, 2021. In just three hours, the equivalent of more than 2 months of rain fell on Gard's southern and western regions, in particular Nimes.

A mass of hot and humid air rose over France at the beginning of the week in an increasingly unstable atmosphere, with thunderstorms affecting most of the country on Tuesday, MeteoFrance meteorologists said.1

Supplied with moisture coming from the Mediterranean, they were particularly intense in southern France, causing remarkable accumulations of rain around the Gulf of Lions. In Nimes, the intensity of the rain was historic.

A weather station in Saint-Dionizy recorded 244 mm (9.6 inches) of rain in just 3 hours, 'an episode which statistically occurs less than once in a century.'

This is an absolute record for the Gard department and very close to the 3-hour rainfall record for the entire country — 253 mm (9.9 inches) set in Montpellie in 2014. 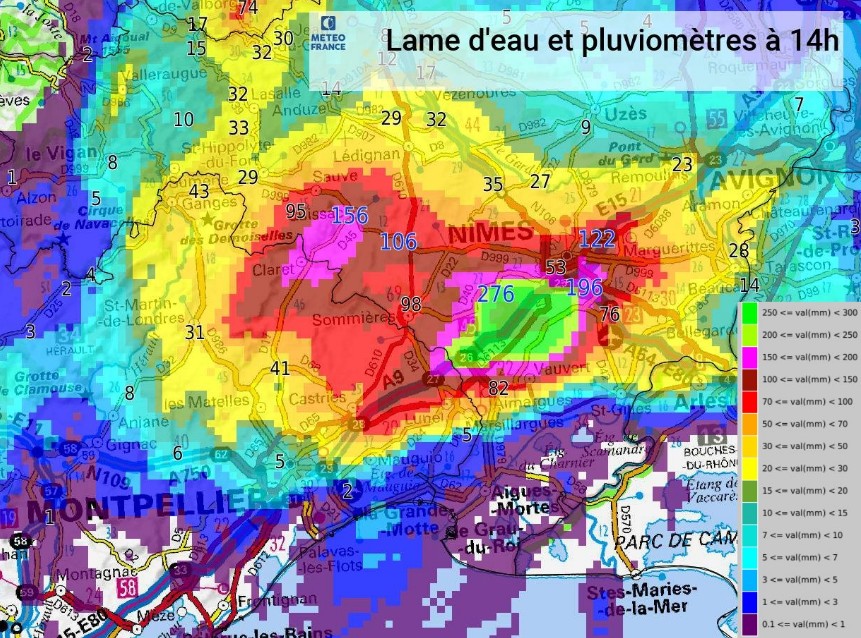 By midday on Tuesday, 23 people had been rescued from their vehicles by firefighters. A special water rescue team was deployed in Nimes as well as three rescue helicopters.2

At least 10 people were airlifted to safety by helicopter in the municipality of Aigues-Vives, one of the hardest-hit areas. Rescues were also carried out in the towns of Uchaud, Bernis, Calvisson and Boissieres.3

Several people were reported missing on Tuesday, but all but one were found, Interior Minister Gerald Darman confirmed.

The event comes 6 days after severe floods hit the Lot-et-Garonne department, southwest France, inundating streets of the city of Agen with more than 2 m (6.6 feet) of water.4

While no injuries or fatalities were reported, around 70 firefighters were deployed to around 130 incidents, mostly for flooded cellars or buildings.

"The analysis of extreme Mediterranean rainfall events over the last decades shows an intensification of heavy rainfall and an increase in the frequency of the strongest Mediterranean episodes," Meteo France said in a news release1, providing the following figures:

Over the past decades, the following trends have emerged for the French regions:
• intensification of heavy rainfall in the Mediterranean regions between 1961 and 2015: + 22% on the annual maximum of daily accumulations, with a very high interannual variability, which explains the high uncertainty (from +7 to + 39%) on the magnitude of this intensification;
• increase in the frequency of the strongest Mediterranean episodes, in particular those exceeding the threshold of 200 mm (7.9 inches) in 24 hours.

4 Severe floods hit Agen after two months' worth of rain in just 3 hours, France – The Watchers