Tropical Storm "Goni" formed from the Tropical Depression 16W east fo Guam in the North Pacific on August 14, 2015. On its journey across the North Pacific it battered the Luzon island, causing floods and landslides and it affected the Philippines, Japan and Taiwan.

Its intensity is expected to weaken during the next three days, although warnings for storm surges, strong winds and heavy rainfall remain in place across Taiwan and parts of Japan.

Goni passed over the Ishigaki and west of Miyako islands, southern Okinawa prefecture, Japan on August 23. Its center was located 93 km (58 miles) south-west of Kume island at 00:00 UTC on August 24, after its maximum sustained wind speed intensified to 204 km/h (127 mph). 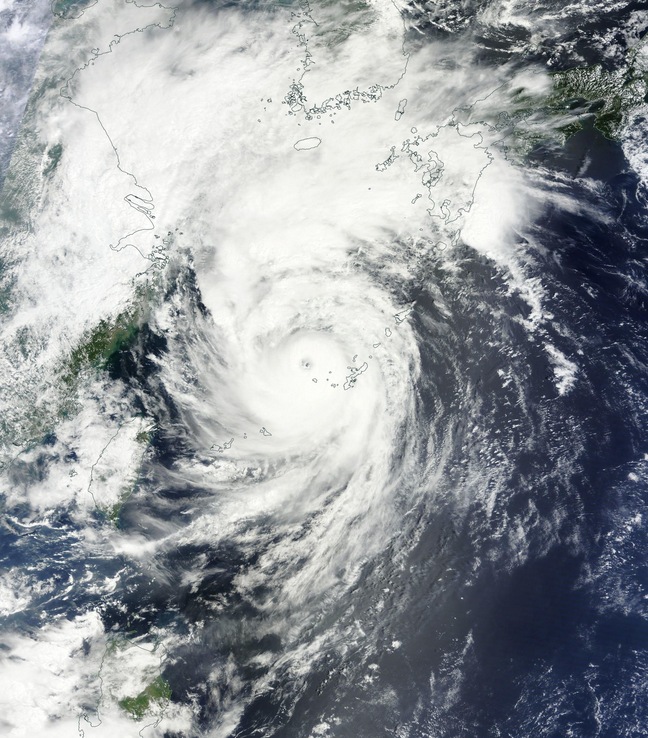 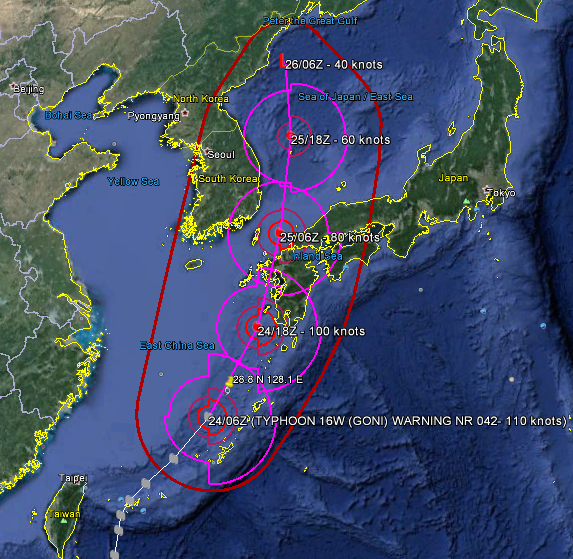 Forecasted track for Typhoon "Goni" over the next 48 hours. Image credit: JTWC/Google Earth

Over the next 24 hours, Typhoon "Goni" is expected to enter the Sea of Japan and pass over the Kyushu Island. Typhoon's strength is expected to gradually dissipate, due to its interaction with land and cooler waters of the Sea of Japan. The sustained wind speeds and wind gust speeds will decrease and the typhoon will begin its transition to a tropical storm level.

Goni will continue affecting the areas along its path with heavy rain, strong winds and storm surge which is estimated at 0.9 m (3 feet). Warnings for high waves, heavy rain, floods, storm and storm surge are in place across the regions of Okinawa and Kagoshima while a heavy rain warning remains in effect in most of Taiwan.​

So far, 14 people have been killed in the Philippines, and about 7 500 families were preventively evacuated in Luzon. In Ishigaki, Japan, 5 people reported injuries due to extreme weather conditions. In Taiwan, over 2 500 people had been preventively evacuated, however, luckily, no significant injuries of damage have so far been reported.

Over the next 72 hours the maximum sustained wind speed is expected to drop at 65 km/h (40 mph) with wind speed gusts decreasing to 93 km/h (58 mph). The central pressure is expected to rise to 998 hPa, and the tropical storm is expected to continue moving at the speed of 25 km/h (15 mph) north-north-west.