First reports mention at least 4 casualties in the Bicol region, power outages, flash floods and widespread damage. The deaths included one person who was hit by a tree and a 5-year-old child washed away after a river overflowed.

"We are expecting major damage," said Ricardo Jalad, head of the Philippines' National Disaster Risk Reduction and Management Council (NDRRMC). "There are so many people who are really in vulnerable areas." 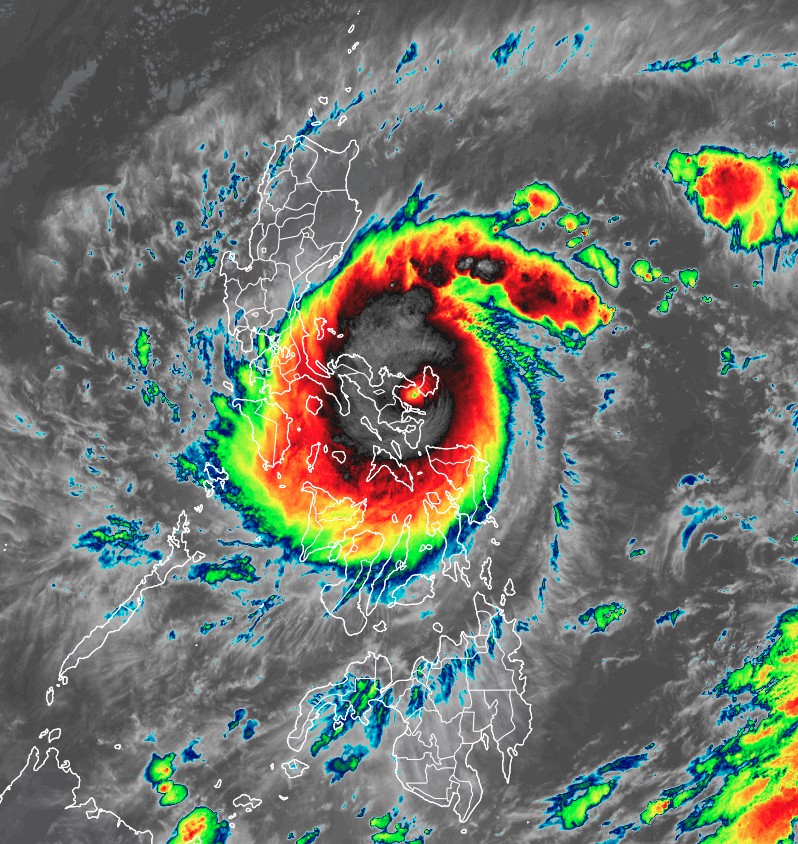 The capital Manila is in the projected path of the storm, with the weather bureau predicting intense rainfall and storm surges for the city.

Armed Forces of the Philippines chief-of-staff Gen. Gilbert Gapay urged all troops tapped to conduct disaster response missions to focus on their tasks.

"Today let's focus (on) the task at hand to help our countrymen particularly those situated along the path of Super Typhoon Rolly," Gapay said, adding to expect the worst as the cyclone threatens Metro Manila, Bicol Region and Central Luzon.

The agency warned that catastrophic violent winds and intense to torrential rainfall associated with the region of the eyewall and inner rainbands of the typhoon is expected within the next 12 hours over the western portion of Camarines Sur, Marinduque, the central and southern portions of Quezon, Laguna, the eastern portion of Batangas, and Cavite. 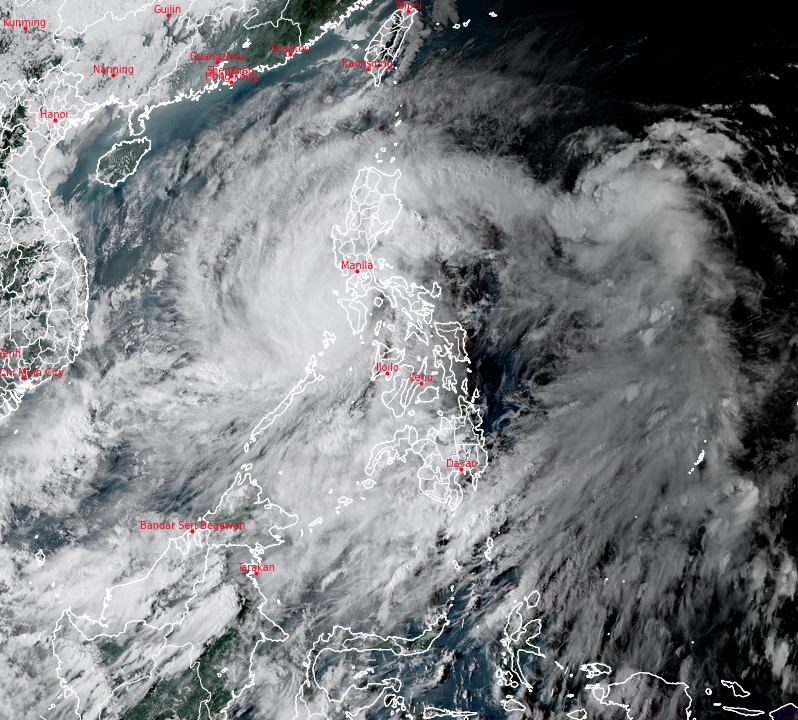 The minimum central barometric pressure was 965 hPa, and the system was moving west at 26 km/h (16 mph). 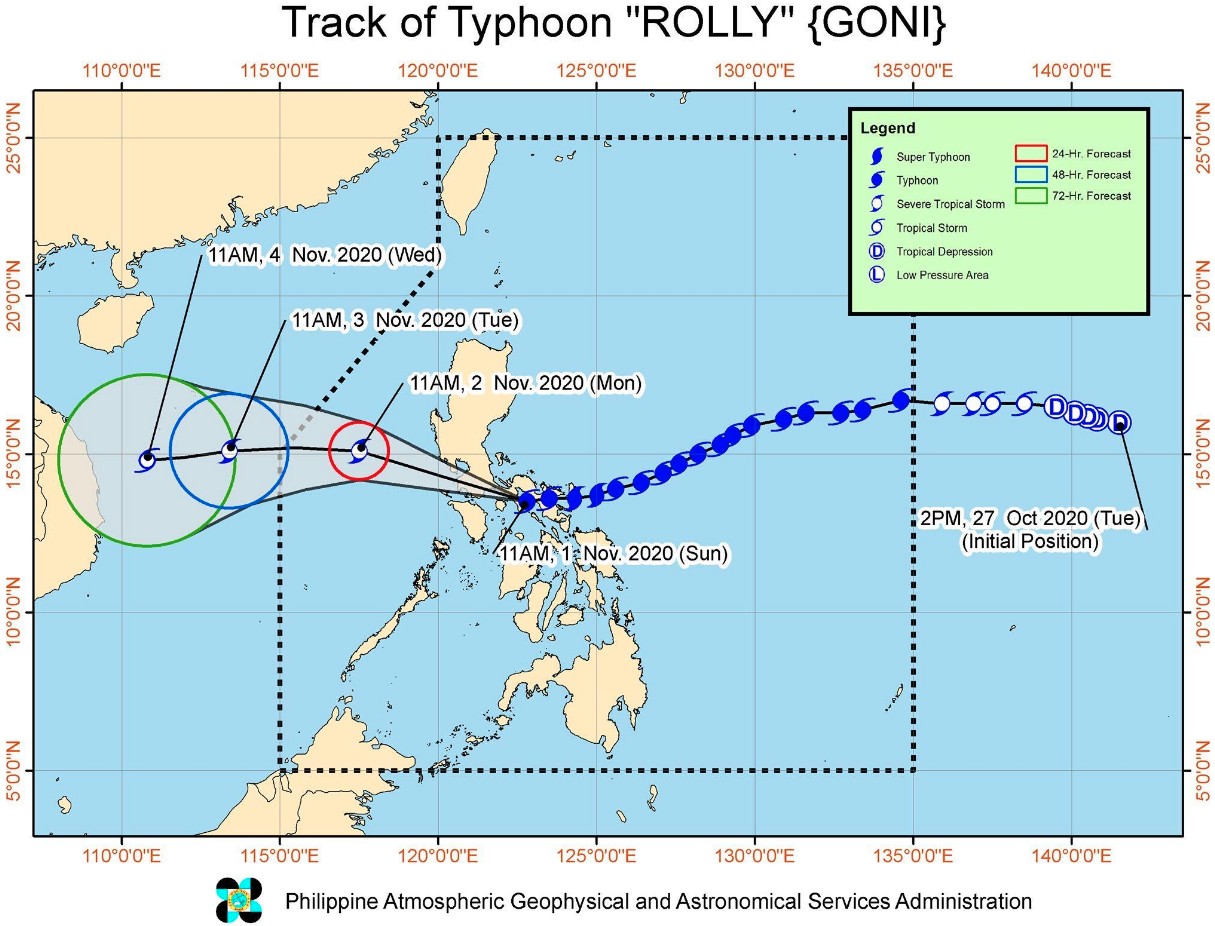 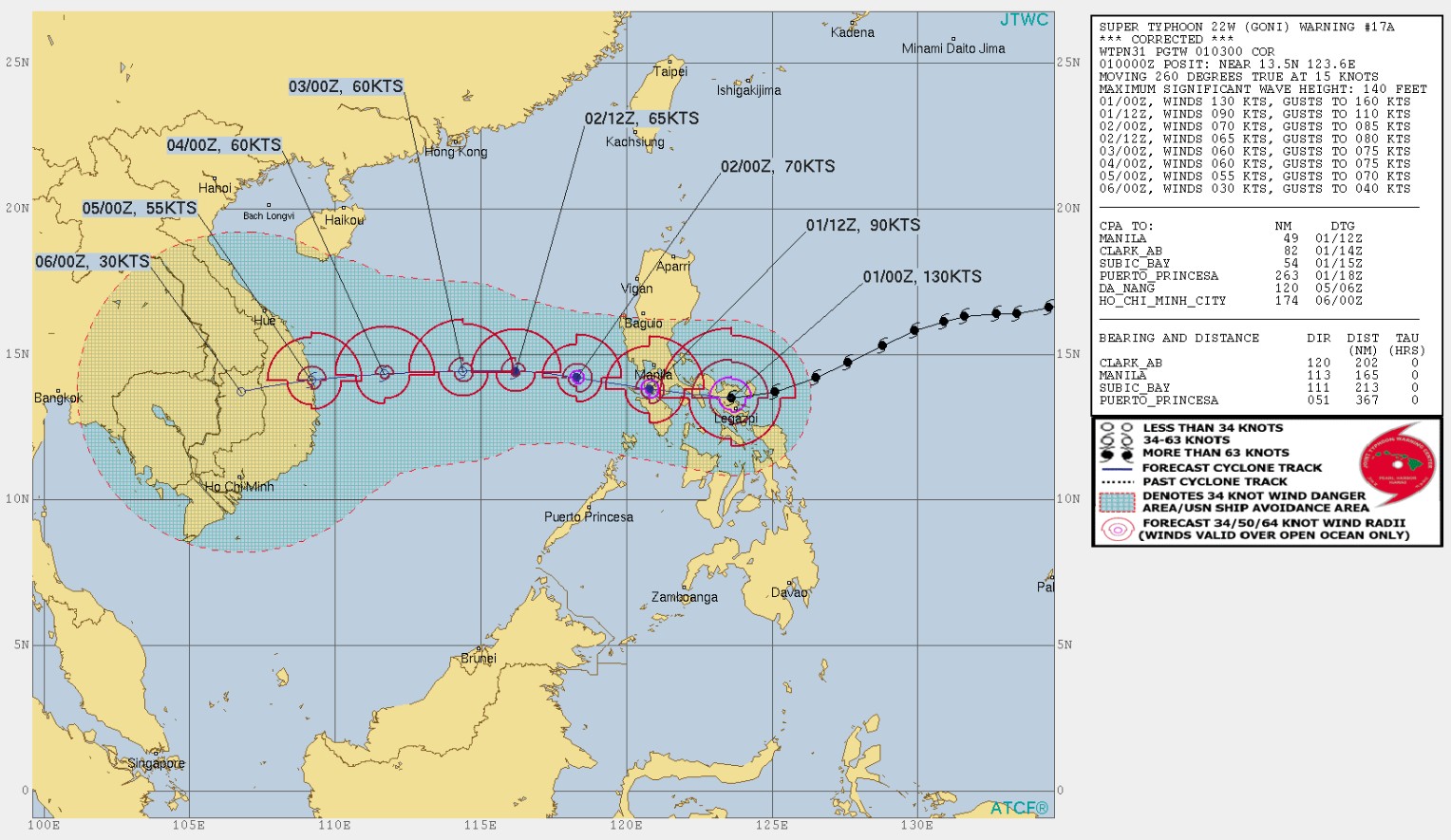 Goni will continue to track overland over the next 12 hours, JTWC said at 03:00 UTC on November 1.

By 03:00 UTC on November 2, the system will have begun to track over the South China Sea. Cooler sea surface temperatures and continued moderate vertical wind shear will lead to further weakening to 130 km/h (80 mph) by this time.

The storm will track generally westward over the next 4 days and make its final landfall over central Vietnam, south of Da Nang, at around 00:00 UTC on November 5.

After landfall, Goni will rapidly weaken due to terrain effects.

A total of 1 468 296 people were affected in Regions II, III, Calabarzon, MIMAROPA, and V, the National Disaster Reduction and Management Council noted in Sitrep No. 3 (11:00 LT, November 2).

The death toll rose to 17, the Office of Civil Defense (OCD) in Bicol said on Monday.

OCD division chief for operations said most of the fatalities were either swept away or buried by a huge volume of volcanic material that cascaded down the slopes of Mayon volcano due to heavy rain, the Philippines News Agency (PNA) reports.

Lahar-carrying boulders damaged bridges in Daraga and Sto. Domingo while 147 houses were buried by lahar and mudflow in Guinobatan town, their Municipal Disaster Risk Reduction and Management Office (MDRRMO) reported.