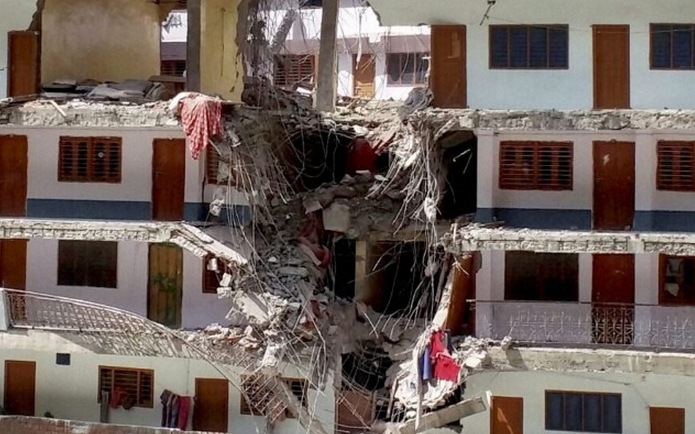 A sudden and extremely intense landslide was reported at the Manikaran Sahib Gurdwara site in Himachal Pradesh, India, on August 18, 2015. The extreme event left at least 7 people dead, and injured another 11.

A strong, high energy landslide near Kulu appears to have been a massive boulder roll which violently shattered a part of the Hindu temple and pilgrimage site of the Manikaran Sahib Gurdwara. The temple is situated on a set of hot springs at an altitude of around 1 760 m (5 774 feet). The hot springs are probably indicative of active faulting in the area, which means the adjacent slopes are unusually unstable.

The landslide from the higher located Gadagi village came rushing down on the place of worship (gurdwara) and hit its community kitchen and accommodation wing: “There was heavy rush of pilgrims at the gurdwara and its neighboring areas when the landslide occurred,” said Thakur Chand, head of the village.​

The Manikaran Sahib Gurdwara site is located on a high altitude which increases its landslide potential. The CCTV footage indicates the boulder came rushing down a small gully above the gurdwara site, although it is still unclear where it originated from.

Securing the pilgrimage sites, such as Gurudwara Manikaran Sahib is both difficult and expensive, however a swift action is required as these sites attract a lot of people into landslide prone areas, which can be especially dangerous during monsoon seasons when the hazard risk is at its highest.