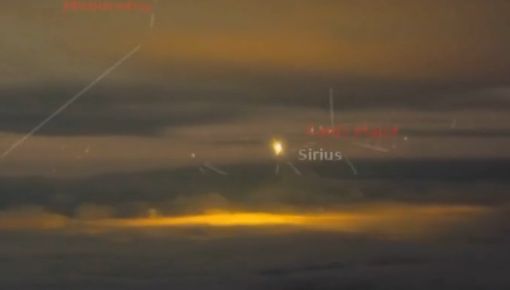 A strong outburst of lightning from Hurricane "Hilda", in the Pacific Ocean, was reported by the National Weather Service on August 10, 2015. At first, the scientist thought the lightning was the so-called sprites phenomena, however, closer observation showed it was gigantic jets, a more powerful and extremely rare event.

The weather phenomena, known as sprites, are an unusual form of lightning, shooting up from the tops of electrical storms. The intense outburst reach up to the edge of space, on the same height levels with meteors, auroras and noctilucent clouds. It's only recently that the researchers became aware that the sprites happen on top of the ordinary thunderstorms.

This event, however, is pretty rare above a hurricane, as they have no vertical winds that would trigger the electrical activity in the storms. The discovery indicates Hurricane "Hilda" was not a typical storm.

The phenomena was caught on a camera from the Canada-France-Hawai'i Telescope (CFHT) CloudCam, on top of Maunakea volcano, on August 10. A more careful look on the video revealed that the recorded appearance were not sprites, but so-called gigantic jets, Spaceweather.com reported on August 14.

Gigantic jets are lightning-like discharges that burst out of tops of the thunderstorms. Their outburst reaches over 80 km (50 miles) through the atmosphere, all the way up to the ionosphere. The phenomena is tremendous and extremely intense, popularly referred to as "sprites on steroids". So far, only a few dozen gigantic jets have been observed, usually above the open ocean waters.

"Gigantic jets are much more rare than sprites," said Oscar van der Velde, a member of the Lightning Research Group at the Universitat Politècnica de Catalunya. "While sprites were discovered in 1989 and have since been photographed by the thousands, it was not until 2001-2002 that gigantic jets were first recorded from Puerto Rico and Taiwan."

The rarity of the phenomena is what makes this observation very important: "Observations in recent years suggest that large thunderstorm clusters embedded in tropical cyclones harbor favorable conditions for gigantic jets. Hilda seems to confirm this. Extreme turbulent mixing in the storm top may assist in triggering these events," O. van der Velde explained.