After an increase in seismicity since mid-April 2015, Ecuadorian volcano Cotopaxi finally erupted on August 14, 2015, for the first time since 1940.

There were at least three eruptions registered on August 14, the first at 09:30, second at 15:15 UTC and third at 19:10 UTC, according to Washington VAAC. Volcanic ash reached an estimated altitude of 15.2 km (50 000 feet) by the end of the UTC day. Highways, homes and cars near the volcano were coated in ash.

Cotopaxi is an active stratovolcano in the Andes Mountains, located about 50 km (31 miles) south of capital Quito, Ecuador. It is one of the world's highest volcanoes, reaching a height of 5 897 m (19 347 feet), and is considered one of the world's most dangerous volcanoes due to a glacial cover that makes it prone to fast-moving volcanic rock and mud flows, or lahars, and its proximity to a heavily populated area. 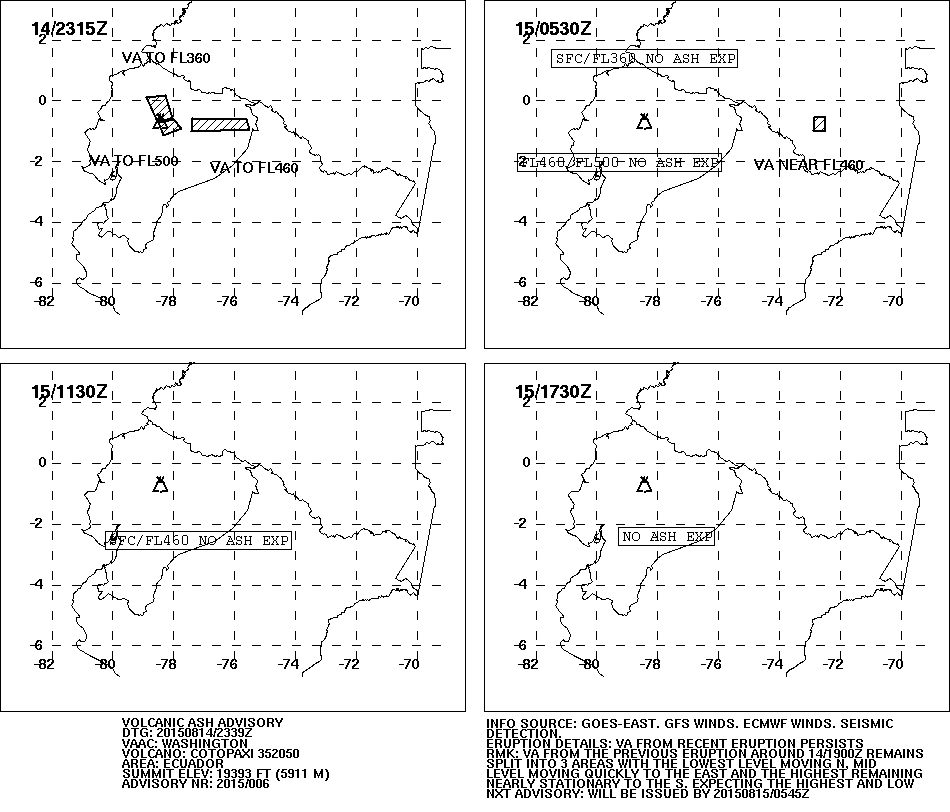 At 05:44 UTC on August 15, the Washington VAAC reported there were no new large explosions. Remnant volcanic ash was not detected in overnight satellite imagery, but is likely lingering as far as 600 km (373 miles) east of summit below 13.7 km (45 000 feet). Seismic data suggest intermittent light volcanic ash emissions could be ongoing.

Government scientists said the volcano did not seem to be on the verge of a major eruption. However, authorities restricted access to the park that surrounds Cotopaxi and suspended ascents of the peak.

Volcanologist Teofilos Turkeridis told channel Teleamazonas that the ash emitted by the volcano is indicative of very violent explosions inside, a warning which could preface "the worst scenario."

Ecuador's top disaster official, Maria del Pilar Cornejo, said a yellow alert had been issued, meaning no evacuations were needed but logistical preparations would be made for a potential emergency.

Instituto Geofísico-Escuela Politécnica Nacional (IG) said an increase in seismicity under the volcano started mid-April 2015. On June 11, IG reported that seismicity at Cotopaxi continued to increase: Tremor began to be detected on June 4, with periods ranging from 10 to 15 minutes. Amplitudes were highest during June 5 – 6. Sulfur dioxide emissions continued to be elevated over baseline levels (which were less than 500 tons/day), detected at values greater than 2 500 tons/day. Low-energy, pulsating gas emissions began on June 10, and Cotopaxi National Park staff reported an increase of water flow in some streams on the NE flank.

According to IG's Cotopaxi special report NO-6 2015 published on August 14, "the preliminary study of the ash produced during [August 14th] explosions suggested that they were not related to the magma at depth, but were rather pressurization of a shallow hydrothermal system, which was overheated by magma in the past weeks. Such explosions are common in the stages of reactivation of volcanoes."

"These explosions have caused a further opening of the volcanic conduit, which has manifested itself in explosions and seismic activity. Such manifestations may be repeated in the coming hours and may progress to magmatic activity in the short or medium term.

This activity of Cotopaxi suggests that the magma at depth are accessing more and more superficial levels which have greater interaction with the hydrothermal system and can cause magmatic explosions and emissions. The progression of magma to the surface will be assessed by monitoring data.

The Geophysical Institute of the National Polytechnic School is continuously monitoring changes in activity in the volcano and will promptly report any changes. It is recommended to climbers caution especially in the area of ​​the crater, to the possible occurrence of explosions, which throw blocks or very energetic emissions of steam and volcanic gases, which can be harmful to health."

Quito's mayor Mauricio Rodas called for local residents to remain calm and keep themselves informed of the situation.

Symmetrical, glacier-clad Cotopaxi stratovolcano is Ecuador's most well-known volcano and one of its most active. The steep-sided cone is capped by nested summit craters, the largest of which is about 550 x 800 m in diameter. Deep valleys scoured by lahars radiate from the summit of the andesitic volcano, and large andesitic lava flows extend as far as the base of Cotopaxi. The modern conical volcano has been constructed since a major edifice collapse sometime prior to about 5000 years ago.

Pyroclastic flows (often confused in historical accounts with lava flows) have accompanied many explosive eruptions of Cotopaxi, and lahars have frequently devastated adjacent valleys. The most violent historical eruptions took place in 1744, 1768, and 1877. Pyroclastic flows descended all sides of the volcano in 1877, and lahars traveled more than 100 km into the Pacific Ocean and western Amazon basin. The last significant eruption of Cotopaxi took place in 1904. (GVP)