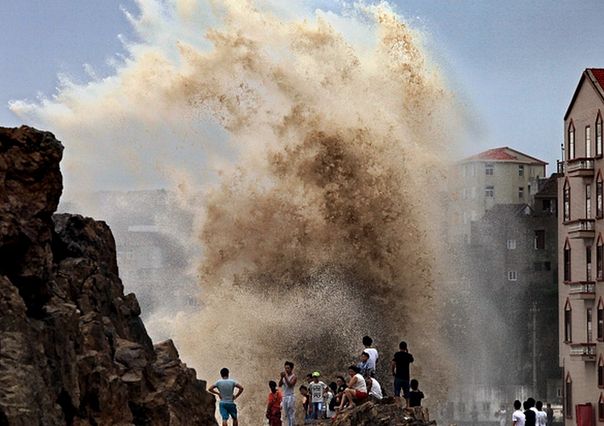 The landfall of Typhoon "Soudelor", the strongest tropical cyclone on Earth in 2015, severely affected the regions of Taiwan and China on August 8, 2015. Heavy rainfall, strong wind gusts and a storm surge have ravaged the area, leaving at least 21 people dead, hundreds of thousands evacuated and dozens of missing reported, so far.

On its journey toward a final landfall in China, Soudelor first devastated the island of Saipan, Northern Mariana Islands. Its center passed directly over the island (population 48 000) on August 2 with wind gusts of about 146 km/h (91 mph) – upper edge of Category 1 equivalent storm on the Saffir Simpson hurricane wind scale.

The US president Barack Obama declared the national disaster area on August 5, as the affected regions remained without power and water. This act allowed federal funding to be sent to US territories for the purpose of rebuilding the areas affected by the massive storm, the Associated Press (AP) reported. 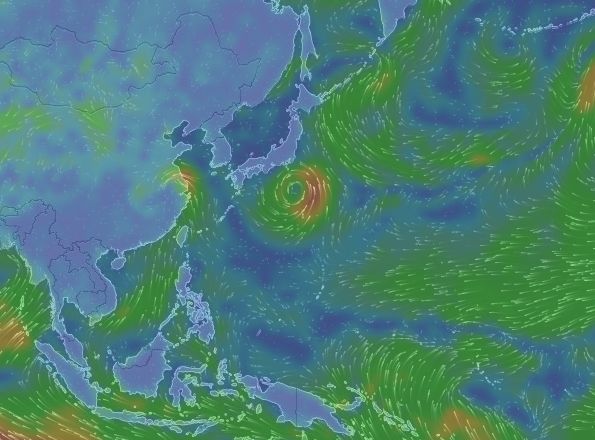 Wind speed across the area affected by Soudelor typhoon on August 10, 14:00 UTC. See animation at: windyty.com

1 329 mm (52.32 inches) of rainfall was reported at Taipingshan, Yilan County in an interval of 72 hours from August 6 to August 8. 322.5 mm (12.7 inches) of rain was measured in Taipei city center, although some parts of the capital measured more than twice the amount. 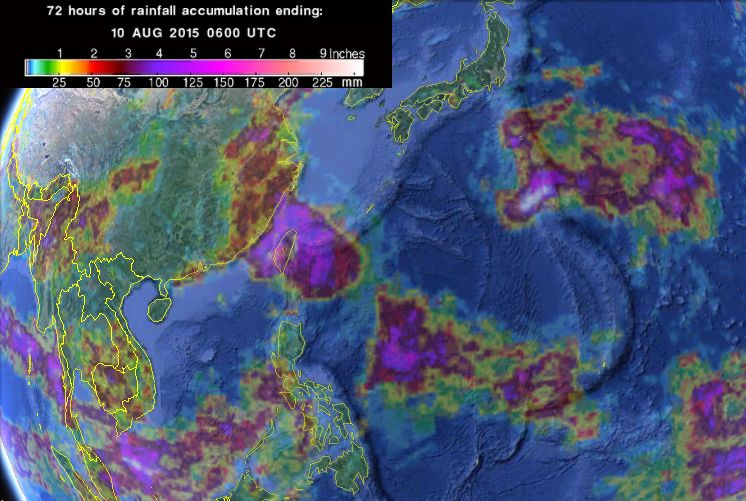 Strong winds of tropical storm strength with wind speed reaching 82.8 km/h (39 mph) have been reported across Taiwan, and a strong supercell has formed over Tainan, causing a tornado touch-down which swept the area on August 9.​

4 million people were cut off the power supplies when typhoon hit the country, a record number of outages previously held by the Typhoon "Herb" that devastated the island in 1996 when 2.79 million people were left without power. "I've never seen such a powerful typhoon in my 60 years," said the resident of eastern Taitung County.

The streets of Taipei were covered in trees, power line cables and other debris. More than 185 people were injured in the storm related incidents across the country, and at least 6 were reported dead, as of August 8.

At least 12 people died when mudslides and flooding swept the Zhejiang Province on August 8. Several houses collapsed and about 5 people were reported missing, according to Xinhua News Agency. Over 10 000 trees have been uprooted across the city of Fuzhou, and a number of vehicles was left stranded by the streams of flood waters.

Chinese Meteorological Administration issued a yellow warning, as of August 10, as more heavy rainfall was forecasted to affect eastern China during the next 24 hours.