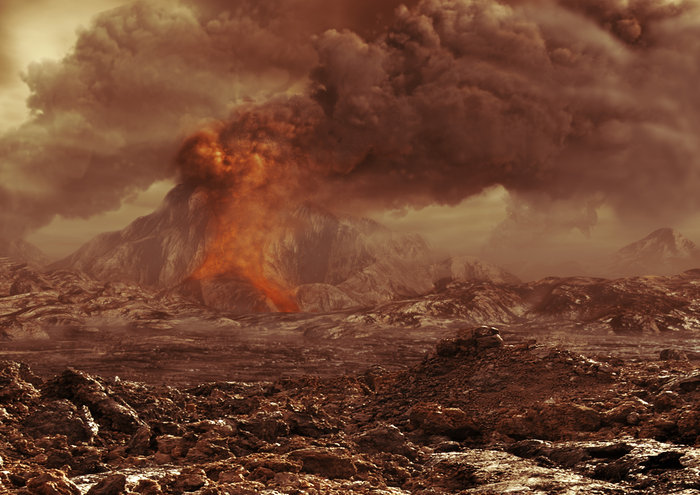 Scientists working for the ESA's Venus Express mission have recently presented the best evidence yet for existence of active volcanoes on planet Venus.

Previous radar missions have revealed Venus to be covered in volcanoes and lava flows and it is long assumed that Venus has an internal heat source which may be finding it's way out to the surface in the form of volcanic eruptions. However, it is still a matter of active research whether the planet is still active today.

Eugene Shalygin from the May Planck Institute for Solar System research in Germany said:

“We have now seen several events where a spot on the surface suddenly gets much hotter, and then cools down again. These four ‘hotspots’ are located in what are known from radar imagery to be tectonic rift zones, but this is the first time we have detected that they are hot and changing in temperature from day to day. It is the most tantalising evidence yet for active volcanism.”

The hotspots in question have been observed along the Ganiki Chasma rift zone, in the vicinity of the previously known volcanoes Ozza Mons and Maat Mons. In general, rift zones are often formed due to magma upwelling below the crust, bringing hot material up to the planet's surface where it may be released as a lava flow through the fractures.

Although the planet's thick cloud layer has somewhat blurred the VMC's view, the camera was specifically designed to conduct these particular systematic surface observations and the regions that change in temperature over time can be clearly distinguished, as they are notably higher than the planet's average surface temperature, according to the co-author Wojciech Markiewicz. Due to this thick cloud cover, the areas of increased emission appear to spread out, covering areas more than 100 km across, however, the hot regions on the surface itself are probably much smaller. For example, the team calculated that the hotspot feature named 'Object A' could be only around 1 square kilometer in size; it's temperature reaching 830°C, well above the global surface average.

According to the analysis, the Ganiki Chasma rift zone, which was already considered to be one of the most recently geologically active regions of the planet, is still active today.

"It looks like we can finally include Venus in the small club of volcanically active Solar System bodies. Our study shows that Venus, our nearest neighbor, is still active and changing in the present day – it is an important step in our quest to understand the different evolutionary histories of Earth and Venus.” The previous studies reported the infrared radiation in three volcanic regions to be different to the radiation coming from the surroundings. This radiation was assumed to be coming from relatively fresh lava flows, less than 2.5 million years old.

In 2012, a sharp rise in the sulphur dioxide content in the planet's upper atmosphere has been observed, in comparison to the data collected in the 2006 – 2007 period. The question was whether this was due to the changes in the planet's wind circulation patterns or to the episodes of active volcanism. 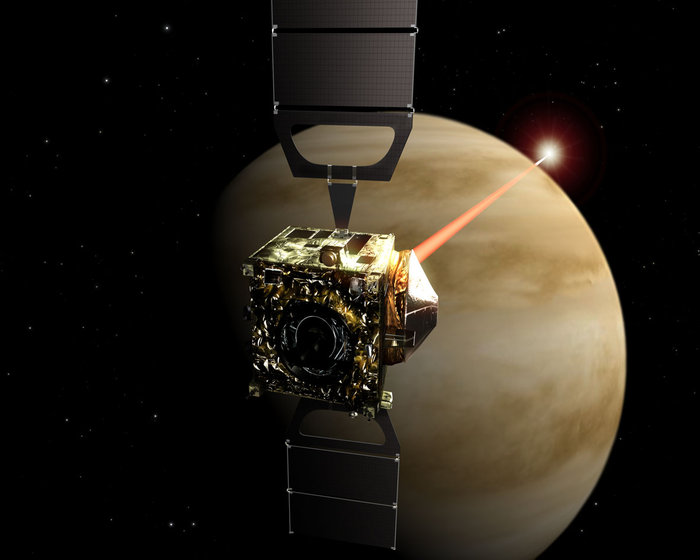 ​Venus Express performing solar occultation at Venus. The technique consists of looking at the Sun through the atmospheric limb. By analyzing the way the sunlight is absorbed by the atmosphere, one can deduce the characteristics of the atmosphere itself. Credit: ESA/AOES Medialab.

Venus, the second planet from the Sun, orbits around our star every 224.7 Earth days and is similar to Earth only in size, mass and bulk composition. Its atmosphere consists of over 96% of carbon dioxide with atmospheric pressure 92 times that of Earth's.

This body is wrapped in an highly thick, opaque layer of highly reflective clouds of sulfuric acid, and it is believed that most of the water that may have existed in the past has photodissociated and been swept away into the space by the solar wind.

All the planets of the Solar System orbit the Sun in an anti-clockwise direction as viewed from above Earth's north pole. Most planets also rotate on their axes in an anti-clockwise direction, but Venus rotates clockwise ("retrograde" rotation) once every 243 Earth days – the slowest rotation period of any planet. Because its rotation is so slow, it is highly spherical. A Venusian sidereal day thus lasts longer than a Venusian year (243 versus 224.7 Earth days).

Some of the recent research have shown Venus behaves more like a comet than a planet.