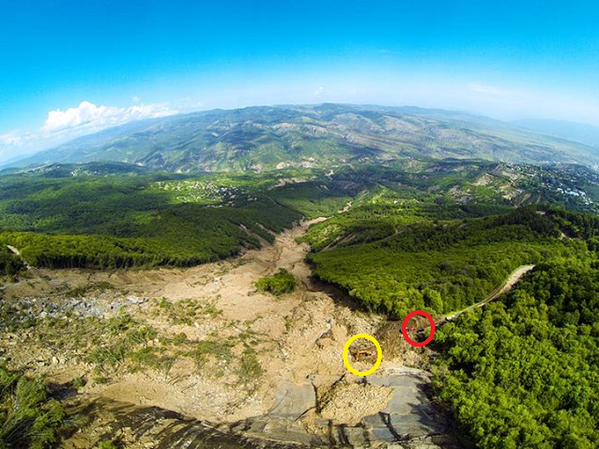 A huge landslide blocked the Vere River on June 13, 2015 creating a natural dam which collapsed the following day and sent huge fast moving stream of water toward capital Tbilisi, Georgia severely flooding the city. The flood caused extensive damage to the city and left 19 people dead and 457 injured.

These video animations show the sequence of events leading to the catastrophic flooding.

The volume of landslide was estimated at about 1 million cubic meters.

Italian geologist Claudio Margottini, a world class UNESCO expert in environmental hazards and risk management, has been working at the landslide area along with Georgian geologists to discover the cause of the landslide.

"This was a huge landslide. Such phenomenon is very rare,” he said. "Clay that was on the rock was softened as a result of the heavy rainfall and collapsed with the rock. This huge mass caused the colossal landslide. Now it is necessary to explore the area because the situation is still very dangerous. If rainfall starts there again there is a big chance another landslide could fall again".

The landslide moved swiftly and out of control down the side of the hill, accumulated debris while passing the Bagebi territory, and slided downhill. A large rock which was caught up in the landslide fell into the Vere River Valley which has caused the Bagebi River to block and flood. The heavy rainfall caused the water levels to rise until the dam burst under the pressure and a huge fast moving stream of water rushed down the Vere River towards Tbilisi.