JMA issued highest alert level (5/5) and reported that pyroclastic flows from the volcano had reached the shore to the northwest.

The municipal government has issued an evacuation order to all of the island's 137 residents.

Two people have been reported injured, presumably burnt by pyroclastic surge, and were flown to a hospital in Yakushima island, Volcano Discovery reports. "So far, it is not clear whether the eruption is a large-scale phreatic (steam-explosion driven) event or caused by new magma. Ash analysis should bring light into this soon." 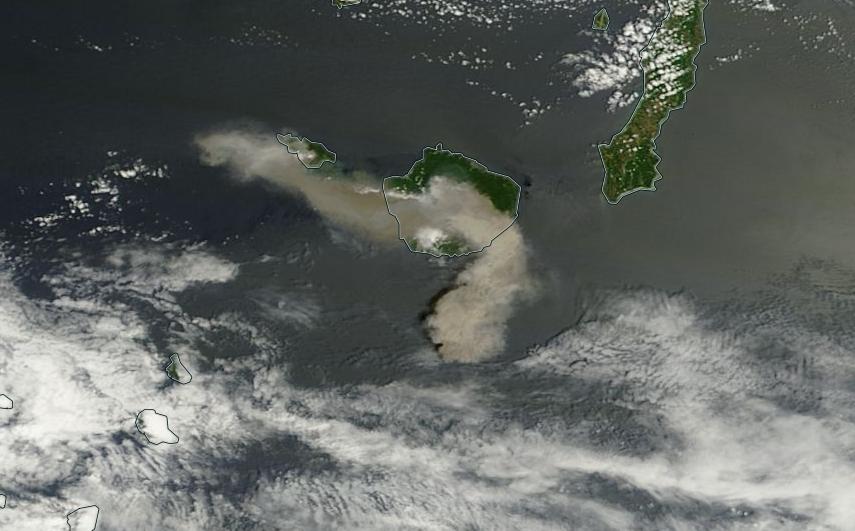 Shindake's eruption in 1841 destroyed villages and claimed many lives, while a series of eruptions from late 1933 to early 1934 left eight people dead and 26 injured, according to an article published in Japan Times today…

Experts had recorded unusual activity for about a decade leading up to last year’s eruption, and the latest blast could be a relatively large, prolonged one. – Associate Professor Ryusuke Imura of Kagoshima University.

A group of young stratovolcanoes forms the eastern end of the irregularly shaped island of Kuchinoerabujima in the northern Ryukyus, 15 km west of Yakushima. Furutake, Shintake, and Noike were erupted from south to north, respectively, to form a composite cone that is parallel to the trend of the Ryukyu Islands. The highest peak, Furutake, reaches only 657 m above sea level. The youngest cone, 640-m-high Shintake, was formed after the NW side of Furutake was breached by an explosion.

All historical eruptions have occurred from Shintake, although a lava flow from the S flank of Furutake that reached the coast has a very fresh morphology. Frequent explosive eruptions have taken place from Shintake since 1840; the largest of these was in December 1933. Several villages on the 4 x 12 km island are located within a few kilometers of the active crater and have suffered damage from eruptions. (GVP)