Sprite season – spectacular, eerie flashes of colored lights that appear high above the tops of powerful thunderstorms – is underway, SpaceWeather reports. Because sprites are associated with thunderstorms, they tend to occur in late spring and summer.

"Sprites are a true space weather phenomenon," explains lightning scientist Oscar van der Velde of the Technical University of Catalonia, Spain. "They develop in mid-air around 80 km altitude, growing in both directions, first down, then up. This happens when a fierce lightning bolt draws lots of charge from a cloud near Earth's surface. Electric fields [shoot] to the top of Earth's atmosphere – and the result is a sprite. The entire process takes about 20 milliseconds."

Sprites, so-named by a University of Alaska scientist inspired by the creatures in Shakespeare's "The Tempest," have been observed since the 1800s, though rarely visible from the ground. Aircraft pilots began reporting sightings of sprites in the 1950s and '60s, but they were not formally identified until 1989 when the Space Shuttle (STS-34) recorded the flashes as it passed over a thunderstorm in northern Australia, NASA explains.

Sprites and other phenomena, including elves – that bring a millisecond flash of light that fills the entire night sky within a 100 kilometer (62 miles) radius of the associated lightning strike – are generating much interest because of their strong electric fields and electromagnetic pulses that may interact with the Earth's ionosphere and magnetosphere.

A group of scientists, along with help from Japan's NHK television, sought sprites regularly for two weeks in the summer of 2011 and captured it on film. Video credit: NHK.

Some studies has shown that some lightning strikes might be associated with terrestrial gamma-ray flashes (TGFs), intense explosions of gamma rays lasting only about one millisecond that are emitted into space from the upper atmosphere. Scientists believe electrons traveling at nearly the speed of light scatter off atoms and decelerate just above thunderclouds, emitting TGFs.

Martin Popek photographed these specimens over Nydek, Czech Republic, on May 13, 2015: 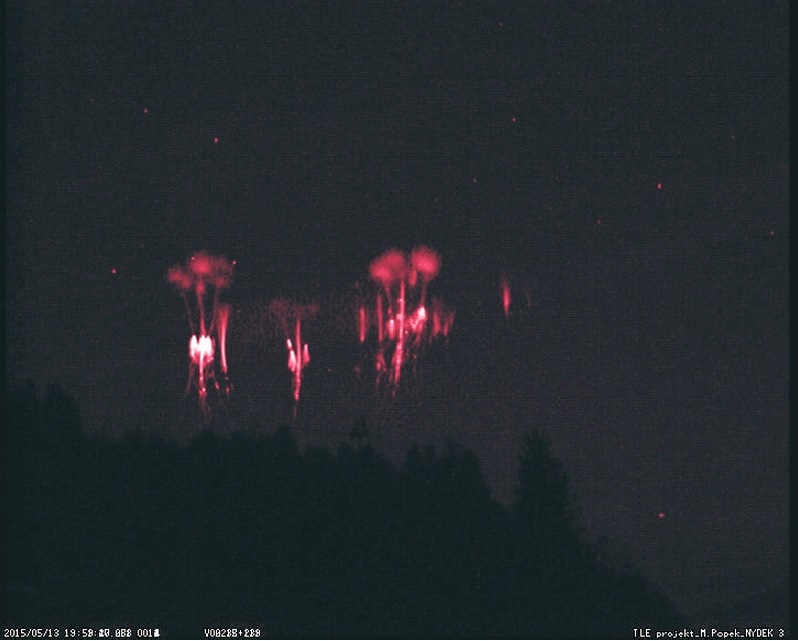 Taken by Martin Popek on May 13, 2015 @ Nydek, Czech Republic (via SpaceWeather)

One night later, May 14, near Santa Fe, New Mexico, "I captured my first sprites of the season," reports photographer Jan Curtis. "The thunderstorm that produced them was about 200 miles [320 km] to my south-southwest." 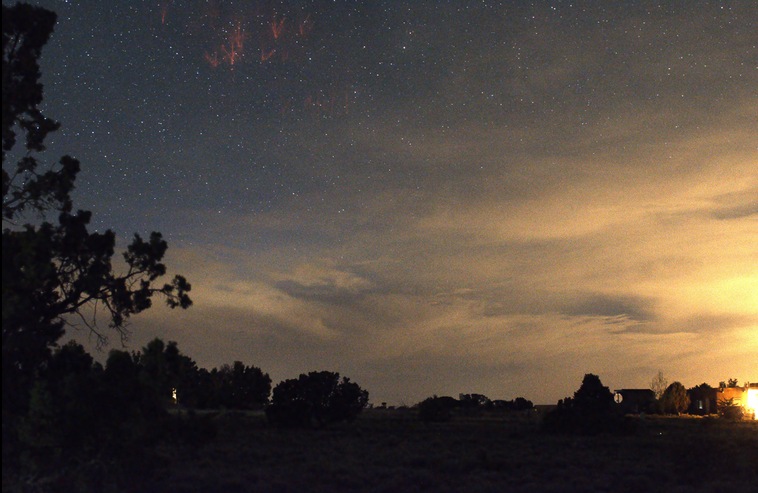 How to look for sprites, blue jets and upward lighning