Exactly 85 years after Clyde Tombaugh’s historic discovery of Pluto, the New Horizons spacecraft set to encounter the icy dwarf planet this summer is providing its first views of the small moons orbiting Pluto.

The moons Nix and Hydra are visible in a series of images taken by the spacecraft from January 27 – February 8, 2015 at distances ranging from about 201 million to 186 million kilometers (125 million to 115 million miles). 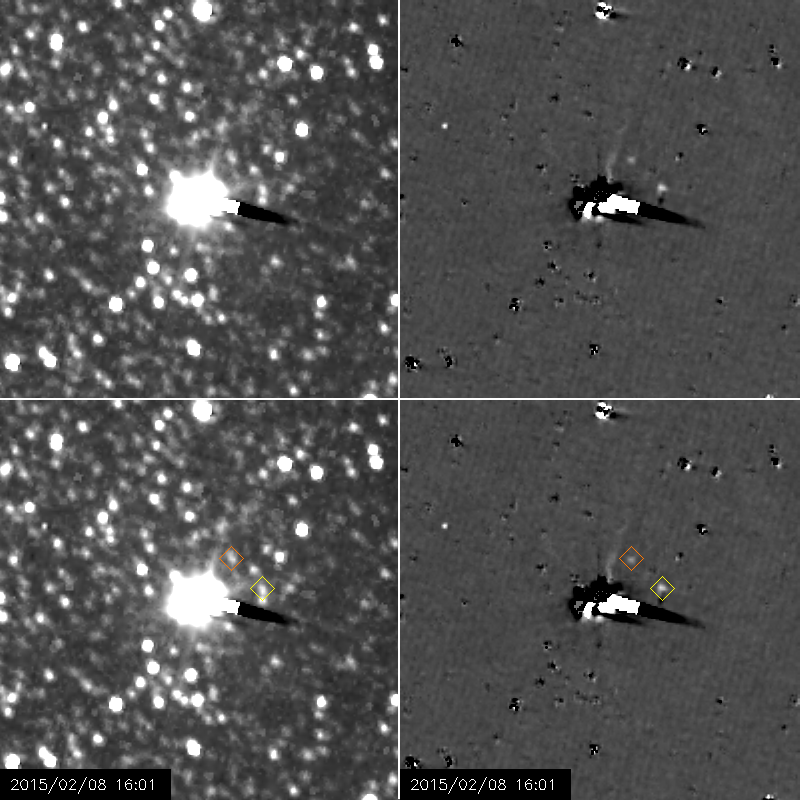 The moons Nix and Hydra are visible in a series of images taken by the New Horizons spacecraft. Image credit: NASA/Johns Hopkins APL/Southwest Research Institute

Assembled into a seven-frame movie, the new images provide the spacecraft’s first extended look at Hydra (identified by a yellow diamond) and its first-ever view of Nix (orange diamond). The right-hand image set has been specially processed to make the small moons easier to see.

“It’s thrilling to watch the details of the Pluto system emerge as we close the distance to the spacecraft’s July 14 encounter,” says New Horizons science team member John Spencer, also from Southwest Research Institute. “This first good view of Nix and Hydra marks another major milestone, and a perfect way to celebrate the anniversary of Pluto’s discovery.”

These are the first of a series of long-exposure images that will continue through early March, with the purpose of refining the team’s knowledge of the moons’ orbits. Each frame is a combination of five 10-second images, taken with New Horizons’ Long-Range Reconnaissance Imager (LORRI) using a special mode that combines pixels to increase sensitivity at the expense of resolution. At left, Nix and Hydra are just visible against the glare of Pluto and its large moon Charon, and the dense field of background stars. The bright and dark streak extending to the right of Pluto is an artifact of the camera electronics, resulting from the overexposure of Pluto and Charon. As can be seen in the movie, the spacecraft and camera were rotated in some of the images to change the direction of this streak, in order to prevent it from obscuring the two moons.

The right-hand images have been processed to remove most of Pluto and Charon’s glare, and most of the background stars. The processing leaves blotchy and streaky artifacts in the images, and also leaves a few other residual bright spots that are not real features, but makes Nix and Hydra much easier to see. Celestial north is inclined 28 degrees clockwise from the “up” direction in these images.

Pluto’s two other small moons, Styx and Kerberos, are still smaller and too faint to be seen by New Horizons at its current range to Pluto; they will become visible in the months to come.