In a special experiment scheduled for February 27th, ESA and NASA are planning to record, from inside, reentry and disintegration of Automated Transfer Vehicle (ATM).

Every mission of ESA’s ATV ferry ends in the same way – filled with Space Station rubbish then burning up in the atmosphere, aiming at a designated ‘spacecraft graveyard’ in an empty stretch of the South Pacific.

But the reentry of this fifth and final ATV is something special, they say. NASA and ESA are treating it as an opportunity to gather detailed information that will help future spacecraft reentries.

Accordingly, ATV-5 will be steered into a shallow descent compared to the standard deorbit path.

This ATV’s fiery demise will be tracked with a battery of cameras and imagers, on the ground, in the air and even from the Station itself, and this time on the vehicle itself.

ESA’s camera will not survive the reentry, expected to occur some 80 – 70 km up, but it is linked to the ‘SatCom’ sphere with a ceramic thermal protection system to endure the searing 1500°C. 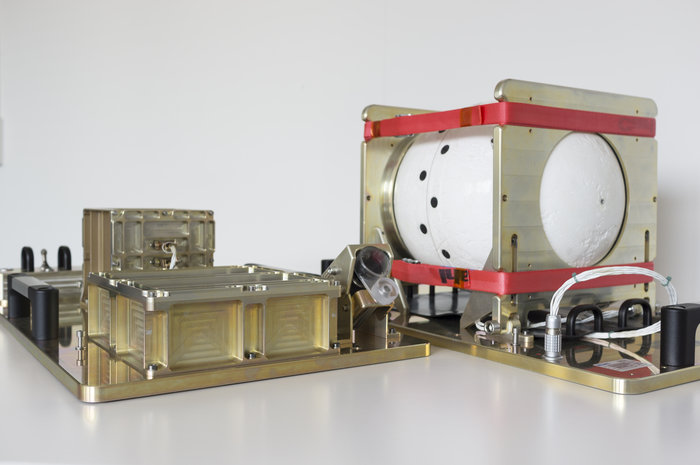 The Automated Transfer Vehicle (ATV) Break-Up Camera (BUC) incorporating the Infrared Camera instrument and SatCom device to be flown on ESA's final ATV, to record infrared footage from the inside of the spacecraft's break-up as it reenters the atmosphere. The camera is bolted onto an ATV panel; the infrared lens can be seen at the centre of the image. The approximately 10 seconds of footage gathered by the BUC will be transmitted to the spherical SatCom device, right, which is coated in a ceramic heatshield. SatCom will survive the spacecraft’s break-up to transmit the imagery to Iridium telecommunications satellite once it is in free space, falling to Earth. Credit: ESA

Once SatCom is falling free, it will transmit its stored data to any Iridium communication satellites in view.

Plunging through the top of the atmosphere at around 7 km/s, it will itself be surrounded by scorching plasma known to block radio signals, but the hope is that its omnidirectional antenna will be able to exploit a gap in its trail.

If not, signalling will continue after the plasma has cleared – somewhere below 40 km altitude.

The camera will be activated by a set sequence of acceleration by ATV. Some 10 seconds’ worth of 320×256 frames from the camera will be buffered in the SatCom memory at a time plus about one-frame-per-second reference images of the previous set, and progressively overwritten as fresh imagery arrives.

This newly constructed camera has broader potential as a ‘blackbox for reentry’, flyable on a wide range of satellites and launchers. 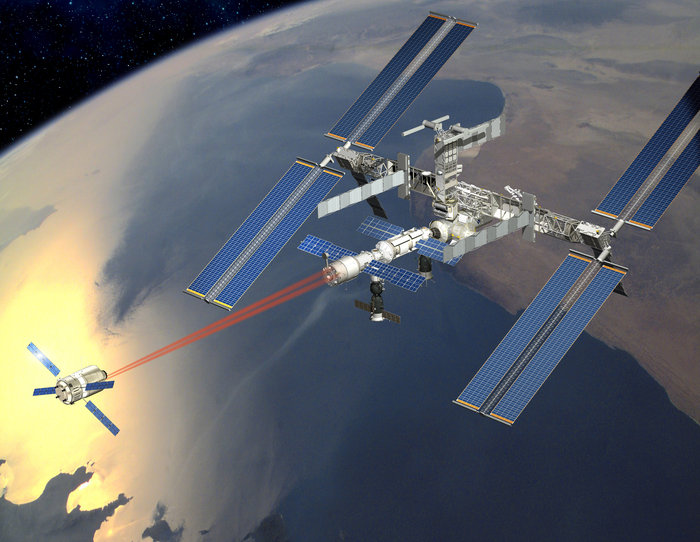 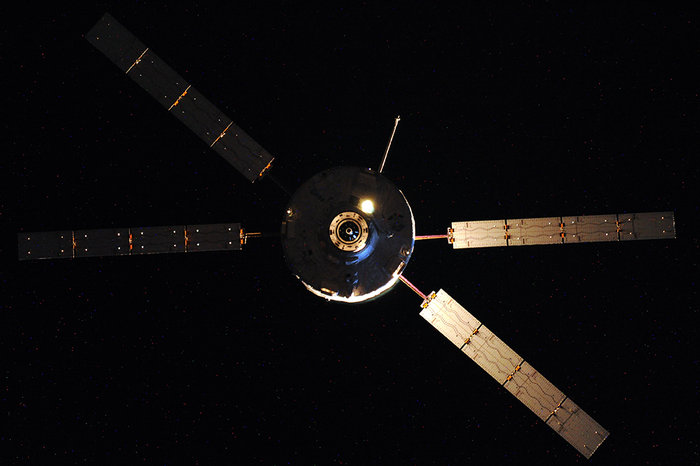 ATV-1 Jules Verne burning up over an uninhabited area of the Pacific Ocean at the end of its mission. Credit: ESA/NASA

Featured image: Europe’s space freighter ATV Jules Verne burning up over an uninhabited area of the Pacific Ocean at the end of its mission. Credit: ESA/NASA