As forecasted earlier this week, atmospheric river known locally as the Pineapple Express is sweeping down the West Coast US. The storm is dropping heavy rainfall, knocking down trees and power lines, delaying hundreds of flights and causing flash floods and traffic chaos.

Widespread heavy rain is expected to continue across much of the West Coast this weekend and into the next week. The heaviest rainfall will occur across northern California and southern Oregon, where as much as 6 – 10 inches (150 – 254 mm) of rainfall is forecast over the next two days.

While the rain is beneficial for this drought-stricken region experts believe the much expected rainfall won't make a significant dent in California's historic drought.

State water officials say it would take about 150 percent of the average rainfall for California to recover the dry period. But snow, which is now far below normal, is more important than rain because snowpack supplies about a third of the water needed by residents, agriculture and industry. 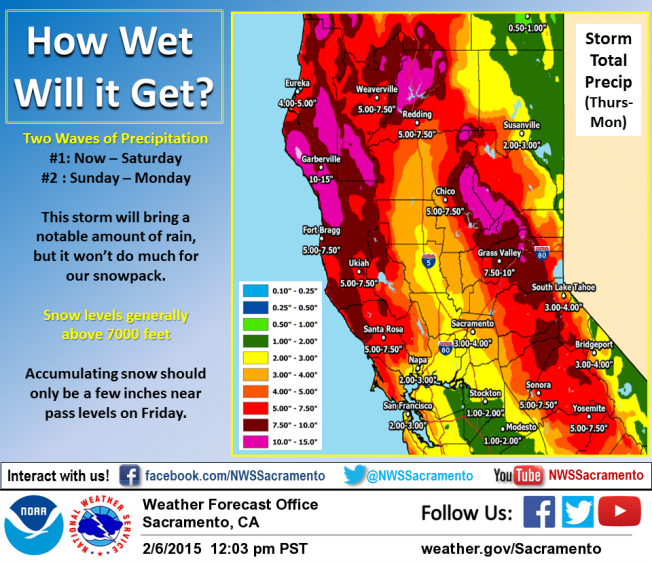 This storm is expected to bring significant snow in the mountains, including the Cascades of Washington and Oregon and the northern Sierra Nevada in California. However, snow levels will generally be above 7 000 feet (2 133 meters) in Sierra Nevada and there likely won't be much improvement to its snowpack.

The threat of flash floods and landslides will persist into the weekend. High wind warnings and wind advisories are issued for portions of the West, including northern California, Oregon, Washington and western Nevada. Wind gusts over 75 mph (120 km/h) are possible in coastal and mountain areas.