South Pole Ice Core (SPICE) project is a joint effort by researchers from the University of Washington and the University of California, Irvine to 'dig' 40 000 years into climate history at the planet's southernmost tip. The ice core will be drilled to a depth of 1 500 meters and provide records of stable isotopes, aerosols, and atmospheric gases.

Drill site is just 2.7 km (1.7 miles) from the South Pole. Its thick, uncontaminated layers of ice will help answer questions about how Antarctic climate interacts with the rest of the world.

The scientific goal of the project is to assess and understand changes in atmospheric chemistry, climate, and biogeochemistry.

Drilling started mid-December 2014, a bit delayed due to weather, cargo movements, and site construction issues, and will continue through the end of January for the first of the two planned years of the project. 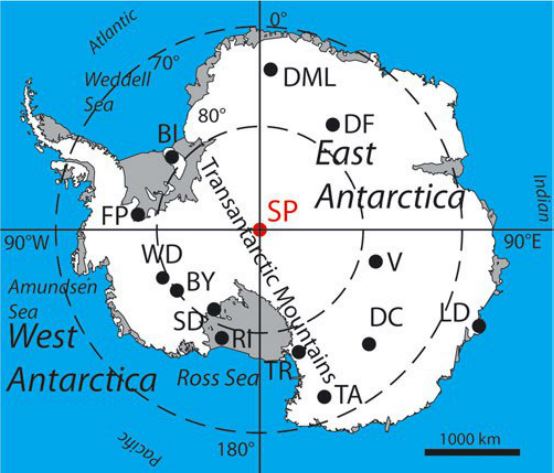 ​Existing deep ice cores are shown by black dots. The South Pole core (red dot) will fill in the picture of Antarctic climate. The UW researchers were also part of a recent project to drill an ice core at the West Antarctic Ice Sheet divide (WD).

The 40 000-year record will be the first deep core from this region of Antarctica, and the first record longer than 3 000 years collected south of 82 degrees latitude.

T.J. Fudge, a UW postdoctoral researcher who is also the chief scientist for this month said the cold temperatures in the ice, about -50 °C, have caused some surprises with drilling since certain aspects of the drill perform differently even than during the test in Greenland at -30 °C.

Project's co-leader Eric Steig, a UW professor of Earth and space sciences, said that most of the other places where they've worked the ice is -25 °C to -30 °C, and that's too warm for rare organic molecules and other trace gases that people are interested in measuring.

"This is basically the coldest ice that we have drilled in," said principal investigator Murat Aydin, a UC Irvine researcher who was chief scientist from setup of the field camp in early November through the end of December. "Everything is harder in the cold."

All three scientists were part of a team that collected a more than 3.2 km (2-mile) ice core from West Antarctica, a five-year effort that ended in 2011. Analysis of that ice is still ongoing at the UW, UC Irvine and many other labs around the country.

The new project at the South Pole is using a new intermediate-depth drill based on a Danish design, and a new drilling fluid. The team reached a depth of 500 meters (1/3 mile) on January 14. By January 18, they were at a depth of 624 m.

"We're not just trying to punch through the ice sheet, the most important objective is to bring up the highest-quality ice possible," Aydin said.

After the core is drilled, three-foot sections will be flown to McMurdo Station and transferred to a ship.

Scientists will then converge on Denver's National Ice Core Laboratory this summer to process the samples and ship pieces to labs across the country. 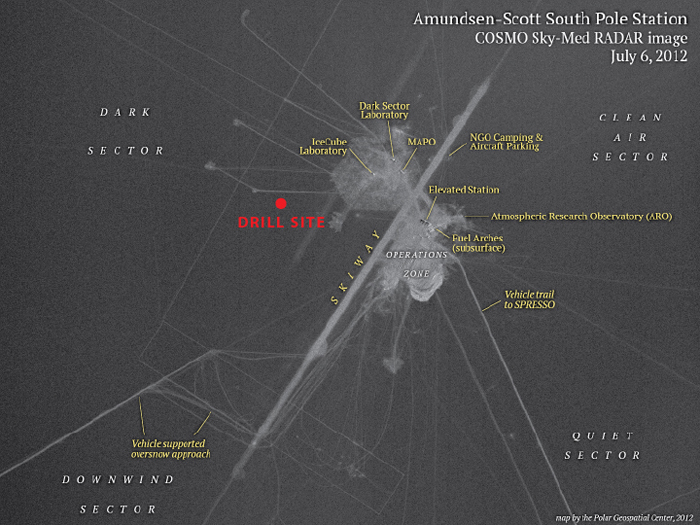 In the UW's IsoLab, Steig will analyze different types of oxygen molecules in the ice to determine the temperature. This will provide a record of climate changes for that region and help to evaluate the large-scale climate patterns across the Southern Hemisphere.

"The South Pole is one of the very few places in Antarctica that has not warmed up in the past 50 years," Steig said. "That's interesting, and needs to be better understood."

The UC Irvine group will look at ultra-trace gases from air bubbles trapped in the ice. Aydin is interested in gases that are one in a billion to one in a trillion molecules in the atmosphere, but provide clues about the productivity of land-based plants and the extent of tropical wetlands during previous eras.

So far, looking at the core shows one layer of ash that the researchers think is tied to a volcanic eruption in the South Sandwich Islands.

"Otherwise, the core has been beautifully clear," Fudge said.