This comet is now a naked eye object and predictions call for it to continue brightening from 5th to 4th magnitude for the next couple of weeks. This makes it an easy target for both binoculars and even naked-eye observations for those who know where to look (finder chart during January 2015 by Sky&Telescope).

This is a once in a lifetime opportunity to observe this comet so close as its next scheduled appearance through our neighborhood is due around the year 10 000.

Q2 will be in excellent place for viewing from the Northern Hemisphere through much of January, 2015.

It can be seen near the constellation Orion about an hour after sunset, although it is even easier to see it a few hours later in the evening and until moonrise. Luckily, the moon is now waning, rising an hour later each evening. 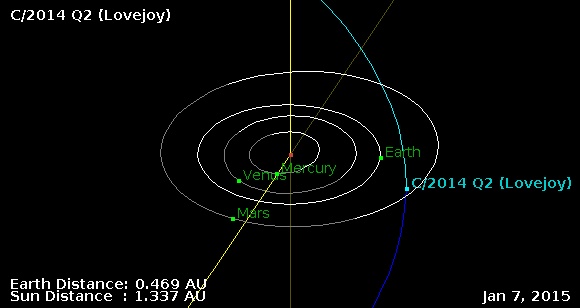 For astrophotographers, however, the real photo op will be on Sunday, January 18, when Q2 brushes past the famous Pleiades star cluster in the constellation Taurus.

3 brilliant images of #Comet #Lovejoy. 3rd image by Velimir Popov, Emil Ivanov. It will be at it's brightest 7th Jan pic.twitter.com/2jiX1qDCPF