Our planet is still under the influence of coronal hole high speed solar wind speed (CH HSS) which is fueling geomagnetic storming around the poles. Additionally, an unanticipated Coronal Mass Ejection (CME) passed the ACE spacecraft and Earth around 05:30 UTC today which soon pushed the geomagnetic storm level to G3 – Strong.

Bt impulsively increased to 13 nt at transient passage, then increased further to 20 nT within an hour. Bz was primarily positive prior to the CME, then decreased to as much as -20 nT and remained steadily negative as the transient passed. Phi angle was in a predominately negative (towards) sector until the CME, when a rotation to a positive orientation was observed.

This event was possibly associated with a CME from early January 3, originally believed to be a far side event, SWPC explained in their Forecast Discussion issued 12:30 UTC today. Continued CME effects are expected during the rest of UTC day and into the first half of January 8.

Aurora – Aurora may be seen as low as Pennsylvania to Iowa to Oregon. 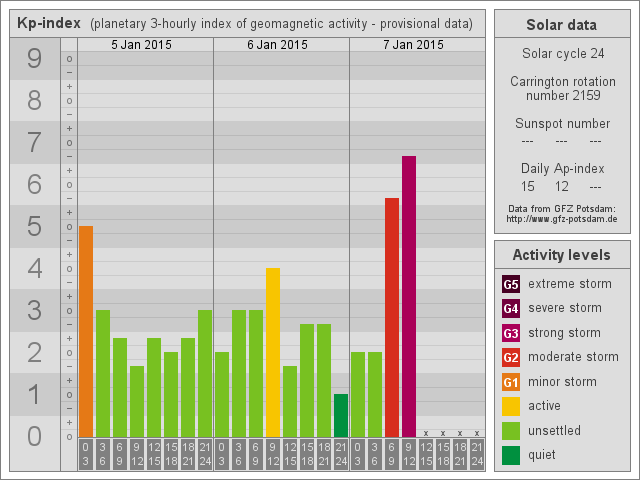 After further analysis, it is unclear if this activity is related to the January 3 CME or a possible Co-rotating Interaction Region (CIR) ahead of the anticipated positive polarity CH HSS. There was no immediate reflection in solar wind speed, density or temperature which would typically suggest a CME. Phi angle was in a predominately negative (towards) sector until the time of the disturbance, when a rotation to a positive (away) orientation was observed. Solar wind speeds slowly began to increase from 410 km/s to near 510 km/s beginning around 07/1400 UTC, in conjunction with a slow rise in temperature. Further analysis will be completed in an attempt to determine the source of this activity as data comes in.

At approximately 07/2000 UTC Bt dropped suddenly from 16 nT to 7 nT and the phi angle began to fluctuate between the negative and positive sectors.

SWPC forecasters expect solar activity to be low with a chance for an M-class (R1-R2/Minor-Moderate) flare event from Region 2253 during the next three days (January 7 – 9). There is also a slight chance for an X-class (R3-Strong) flare during the same period.

Old Regions 2241 (S08, L=218) and 2242 are expected to return over the next three days contributing to the probability for R1 or greater activity.

The geomagnetic field was at quiet to unsettled levels during last 24 hours (by 12:30 UTC) as influence from a negative polarity CH HSS persisted. Conditions abruptly increased for the 06:00 – 09:00 UTC synoptic period, when a moderate geomagnetic storm (NOAA Scale G2) commenced, as the result of CME activity. A strong geomagnetic storm (G3) was observed during the 09:00 – 12:00 UTC period.

Geomagnetic field conditions are likely to be at minor to moderate conditions (G1 to G2) for the remainder of January 7 as CME effects continue. Active levels are expected at the onset of January 8 and quiet to unsettled conditions are forecast for January 9, due to anticipated effects from a recurrent positive polarity CH HSS.

"Despite being under the weather, Marketa, Angus and I ventured out to capture the Northern Lights with our newest tool, the Atomos Shogun 4K external recorder. We combined this with a Sony a7S and a DJI Ronin for a look at what's it like to "Chase the Lights."

The Atomos did great and while the Ronin usually does a good job it seemed quite jittery on this night. I'm in contact with support and hope to find a resolution to this but it's done that the last few times I've taken it out in temps colder than 10ºF. Keep in mind it is very windy, I'm stumbling around in knee deep snow and it's about 0ºF so considering, it still held up rather well.

It seems we have a few things to work out both with the Ronin and the Shogun but are very excited for this amazing trio once we get things rolling smoothly.

If you'd like to be out there having your portraits taken in front of these magnificent Northern Lights, join us for a night under the Aurora. http://www.ronnmurrayphoto.com/Northe…"