KVERT said pyroclastic flow was observed at the SE flank of the dome. At 02:54 UTC, big ash cloud was moving up to 100 km to the NW from the volcano. (VONA/KVERT Information Release, January 07, 2015. KVERT, Institute of Volcanology and Seismology FEB RAS)

At 11:18 UTC, Tokyo VAAC said volcanic ash is being continuously observed on satellite imagery and remarked the responsibility for this ash event is transferred to Anchorage VAAC. 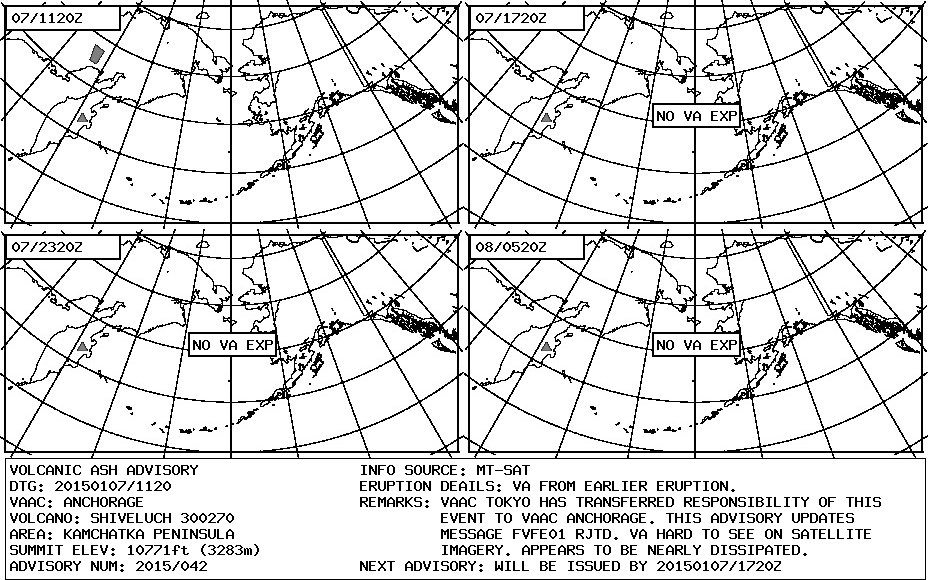 The high, isolated massif of Sheveluch volcano (also spelled Shiveluch) rises above the lowlands NNE of the Kliuchevskaya volcano group. The 1300 cu km volcano is one of Kamchatka's largest and most active volcanic structures. The summit of roughly 65,000-year-old Stary Shiveluch is truncated by a broad 9-km-wide late-Pleistocene caldera breached to the south. Many lava domes dot its outer flanks. The Molodoy Shiveluch lava dome complex was constructed during the Holocene within the large horseshoe-shaped caldera; Holocene lava dome extrusion also took place on the flanks of Stary Shiveluch.