Aircraft on the North America – Japan routes are advised to avoid the area.

The volcano is in an intense phase of activity, characterized by strong explosions and partial collapses of the growing lava dome accompanied by tall ash plumes and pyroclastic flows, VolcanoDiscovery said. 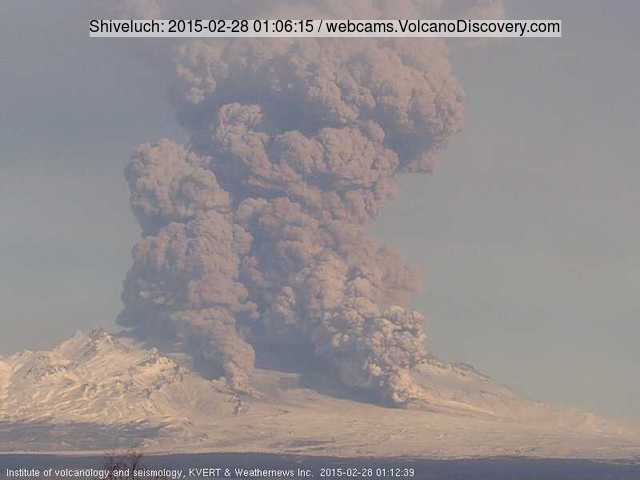 KVERT reported that during February 13 – 20 lava-dome extrusion onto Shiveluch’s N flank was accompanied by incandescence, hot block avalanches, and fumarolic activity. Strong explosions on February 16 and 17 generated ash plumes that rose to an altitude of 8 km a.s.l. and drifted 180 km NW.

A strong explosion on February 8 generated ash plumes that rose to altitudes of 9 – 10 km a.s.l. and drifted 180 km NW.

The high, isolated massif of Sheveluch volcano (also spelled Shiveluch) rises above the lowlands NNE of the Kliuchevskaya volcano group. The 1300 cu km volcano is one of Kamchatka's largest and most active volcanic structures. The summit of roughly 65,000-year-old Stary Shiveluch is truncated by a broad 9-km-wide late-Pleistocene caldera breached to the south. Many lava domes dot its outer flanks. The Molodoy Shiveluch lava dome complex was constructed during the Holocene within the large horseshoe-shaped caldera; Holocene lava dome extrusion also took place on the flanks of Stary Shiveluch.

Featured image: Ash from Shiveluch as seen by NASA Terra/MODIS on March 4, 2015.