A significant eruption of Indonesian Mount Sinabung took place around 00:00 UTC on January 3, 2015, according to Darwin VAAC.

Although volcanic ash was not identified on satellite imagery, Aviation Color Code has been raised to Red.

Mt. #Sinabung erupting in Indonesia on Saturday. 1/3/2015. Via @infoVolcano pic.twitter.com/ghniqRdpjN

In their Volcanic Ash Advisory issued at 14:16 UTC today, Darwin VAAC said a high level of seismic activity is still being reported at the volcano. 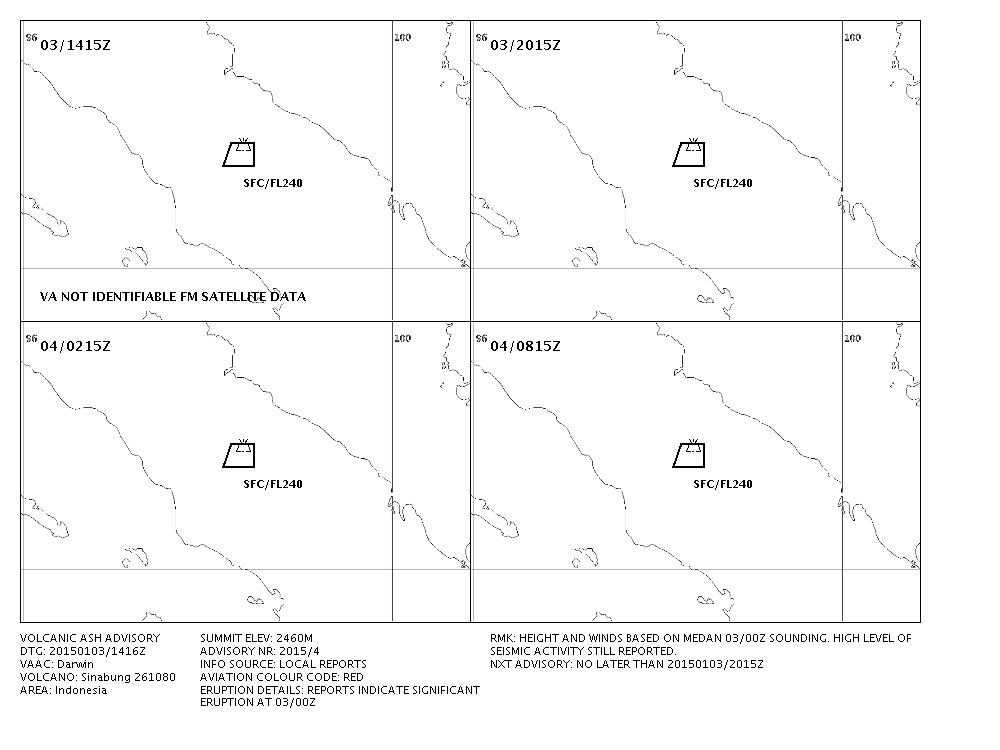 The last time this volcano appeared in GVP's weekly volcanic report was during the week of December 24 – 30, 2014: "Based on satellite images, webcam views, and weather models, the Darwin VAAC reported that an ash plume from Sinabung drifted almost 30 km SW on December 24."

Since October a new lava dome had grown from the crater (on the W side of the lava tongue) and was 215 meters long. The main lava tongue was about 2 947 meters on December 15.

Gunung Sinabung is a Pleistocene-to-Holocene stratovolcano with many lava flows on its flanks. The migration of summit vents along a N-S line gives the summit crater complex an elongated form. The youngest crater of this conical, 2460-m-high andesitic-to-dacitic volcano is at the southern end of the four overlapping summit craters.

No confirmed historical eruptions were recorded prior to explosive eruptions during August-September 2010 that produced ash plumes to 5 km above the summit. (GVP)