NOAA officials announced yesterday the World Magnetic Model (WMM), a representation of Earth’s large-scale magnetic field and an indispensable complement to GPS devices used by NATO, the United States and United Kingdom militaries, as well as civil applications ranging from mineral exploration to smartphone apps, has been updated.

Changes in the Earth's outer core trigger unpredictable changes in its magnetic field, an invisible force that extends from Earth's interior to where it meets a stream of charged particles emanating from the Sun. For example, over the past few decades the North magnetic pole has been drifting toward Siberia at an irregular speed. This migration can adversely affect the accuracy of navigation if not compensated for by an updated WMM.

“We know the Earth’s magnetic field is constantly changing,” said Stephen Volz, Ph.D., assistant NOAA administrator for NOAA’s Satellite and Information Service. “But thanks to the environmental intelligence gathered from a wide array of platforms, including satellite observations, we can make vital updates to the World Magnetic Model and ensure the most accurate navigation for commercial applications.”

Updated every five years, the WMM, created using satellite observations of the Earth’s magnetic field, provides accurate magnetic field declination, the difference between true north and magnetic north critical for navigational safety. Scientists continuously survey the magnetic field and can precisely map the present field and its rate of change and then extrapolate changes into the future. WMM-corrected magnetic compass readings are not subject to ionospheric disturbances and work everywhere, including under the sea and in deep canyons. 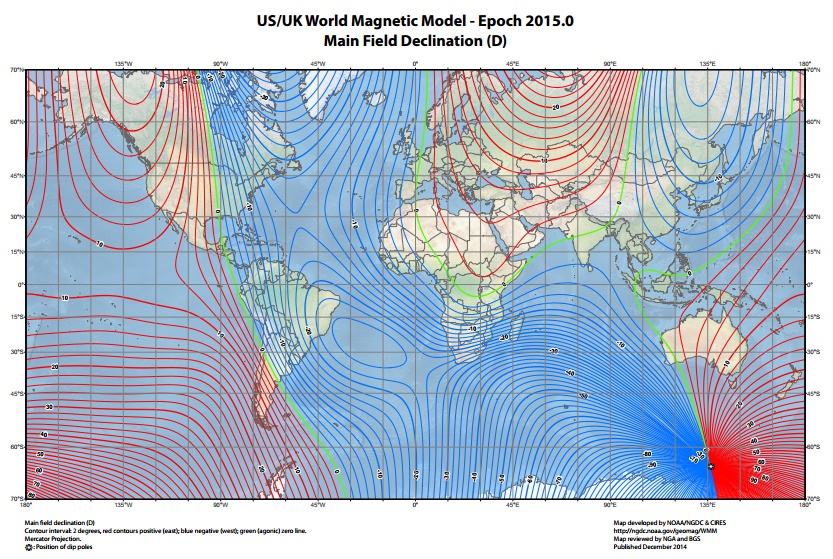 "Although GPS is a great tool for navigation, it is limited in that it only provides your position. Your orientation, the direction you are facing, comes from the magnetic field," said James Friederich, a geodetic scientist at the U. S. National Geospatial-Intelligence Agency. "Our war fighters use magnetics to orient their maps. Your smartphone camera and various apps can use the magnetic field to help determine the direction you are facing. All of these examples need the WMM to provide your proper orientation." 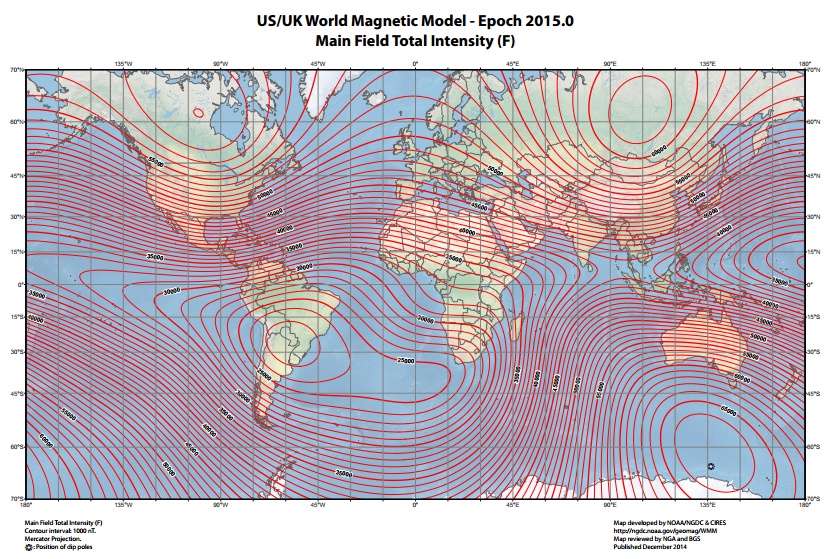 The WMM is the standard navigation model for the U.S. Department of Defense, North Atlantic Treaty Organization, International Hydrographic Organization and consumer electronics. For the last 10 years, NOAA’s National Geophysical Data Center (NGDC) in Boulder, Colorado, working with the British Geological Survey in Edinburgh, Scotland, has co-developed the WMM on behalf of the U.S. National Geospatial-Intelligence Agency and the United Kingdom’s Defence Geographic Centre. NOAA’s partner, the Cooperative Institute for Research in Environmental Studies (CIRES), contributed key science to this project.