Geminid meteor shower, the king of meteor showers, peaks during the night and early morning hours of December 13 and 14 as our planet passes through a debris field left by asteroid, or a possible "rock comet", named 3200 Phaethon.

Geminids are considered by many to be the best shower in the heavens, producing up to 120 multicolored meteors per hour at its peak and traveling at a speed of 35 km (22 miles) per second.

You will want to view these meteors during the earlier part of the night as a quarter moon will rise around midnight. You can also expect fireball reports all over the world in the coming days. 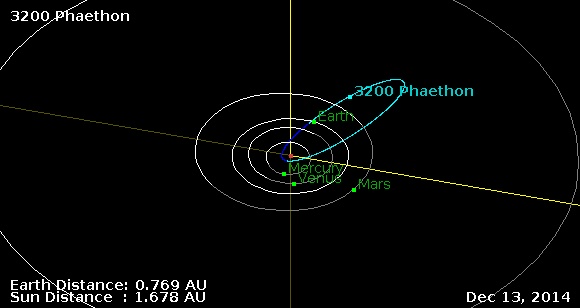 3200 Phaethon has a diameter of only 5.10 km (3.15 miles) and it takes it 1.4 years to orbit the Sun once. It is possible that Phaethon is a "dead comet" or a new kind of object being discussed by astronomers called a "rock comet." Phaethon's comet-like highly elliptical orbit around the Sun gives credence to this hypothesis. However, scientists are not certain how to define Phaethon because when it passes by the Sun it does not develop a cometary tail, and its spectra looks like a rocky asteroid.

Geminids are bright and fast meteors and they tend to be yellow in color. They are also known for their fireball meteors, larger explosions of light and color that can persist longer than an average meteor streak. This is due to the fact that fireballs originate from larger particles of material. Fireballs are also brighter, with magnitudes brighter than -3.

As usual, Slooh will host free live webcast event. They promise stunning visual feeds, so we can hunt for those brilliant streaks of light throughout the sky, as well as a radio audio feed for us to listen for meteors whizzing on by. The show starts 01:00 UTC on Sunday, December 14.