High-resolution topographic data generated from NASA's Shuttle Radar Topography Mission (SRTM) in 2000, previously only available for the United States, will be released globally over the next year, the White House announced yesterday. The announcement was made at the United Nations Heads of State Climate Summit in New York.

The initial public release of topographic data for Africa (below) will help empower local authorities to better plan for the impacts of severe environmental changes such as drought, glacial retreat, inland flooding, landslides and coastal storm surges. Datasets covering the remaining continents will be made available within one year, with the next release of data focusing on Latin America and the Caribbean. 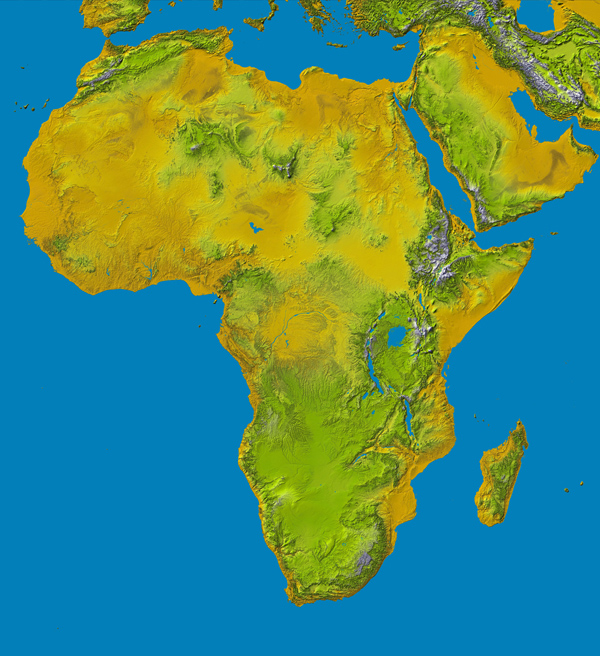 Elevation data at the highest possible resolution from NASA's Shuttle Radar Topography Mission in February 2000 are now being released for the first time for most of the African continent. This color shaded relief image shows the extent of SRTM digital elevation data for Africa. Image credit: NASA/JPL-Caltech/National Geospatial Intelligence Agency. Full image and caption

Lower-resolution SRTM topographic data having 90-meter (295-foot) pixels were released publicly in 2003 for many parts of the world, providing a global standard for many applications. The new data increase the detail to 30-meter (98-foot) pixel spacing, now revealing the full resolution of the world's landforms as originally measured by SRTM.

"The public availability of enhanced global SRTM topographic data will greatly benefit international efforts to better understand natural processes that shape our planet, prepare for and respond to natural hazards, and anticipate and prepare for the impacts of global change," said NASA Chief Scientist Ellen Stofan. "NASA is proud to have played a critical role in creating these data that will benefit society through open data sharing."

SRTM was a joint project of NASA, the German and Italian space agencies, and the National Geospatial-Intelligence Agency. It was managed by NASA's Jet Propulsion Laboratory, Pasadena, California, for NASA's Science Mission Directorate, Washington, D.C. The newly released 30-meter topographic data products will be publicly distributed by the U.S. Geological Survey (USGS) along with the 90-meter data. These data are being made available via a user-friendly interface on USGS's Earth Explorer website.

SRTM flew aboard the Space Shuttle Endeavour in February 2000, mapping Earth's topography between 56 degrees south and 60 degrees north of the equator. During the 11-day mission, SRTM used an imaging radar to map the surface of Earth numerous times from different perspectives. The combination of these radar data were processed at JPL to produce a global topographic map created by bouncing radar signals off Earth's surface and back to the shuttle.

Topographic data benefit a wide variety of activities, from aviation safety to civil engineering projects. Topography also strongly influences many natural processes, such as the distribution of plant communities and the associated animals that depend upon them, weather and rainfall patterns, and the flow and storage of surface water. The data aid in better understanding, predicting and responding to flooding from severe storms and the threats of coastal inundation associated with storm surge, tsunamis and sea-level rise.

Multiple training workshops on SRTM data are planned for users in Africa. The SERVIR program, a joint venture by NASA and the U.S. Agency for International Development, is planning workshops in Eastern and Southern Africa with the Regional Centre for Mapping of Resources for Development, and in West Africa with key environmental organizations. The Secure World Foundation is partnering with NASA, USGS and other members of the international Committee on Earth Observation Satellites to offer online training and regional workshops to further enable users to take advantage of these data resources. JPL is a division of the California Institute of Technology in Pasadena.