As comet-chaser Rosetta approached its target to roughly 2 million km in early May, images captured by OSIRIS clearly showed that the comet has already developed 1 300 km long coma. This onset of activity offers scientists the opportunity to study dust production and structures within the coma before getting much closer.

The following images of 67P/Churyumov–Gerasimenko were taken between March 27 and May 4, as the gap between craft and comet closed from around 5 million km to 2 million km. Comet's nucleus is roughly 4 km across and cannot yet be ‘resolved’.

Launched on March 2, 2004, Rosetta is the first space mission designed to study and deliver a lander on a comet.

This solar powered spacecraft entered deep space hibernation in June 2011 and "woke up" in January 2014. It carries instruments for remote sensing and radio science, and instruments to study the composition, mass distribution and dust flux of the comet’s nucleus, as well as the comet plasma environment and its interaction with the solar wind.

They will all permanently face the comet during the operational phase. 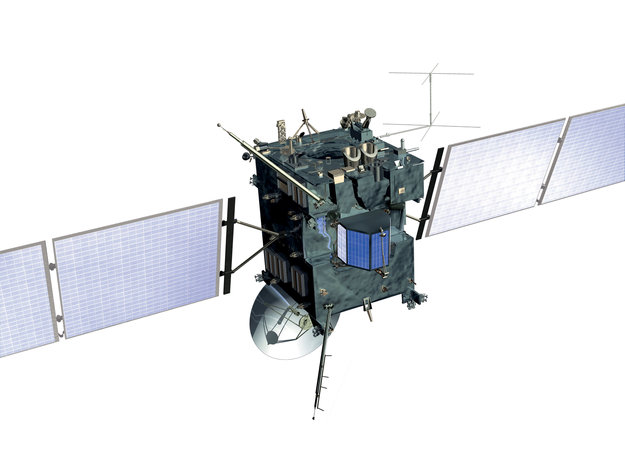 Towards the end of May the spacecraft will execute a major maneuver to line up for the rendezvous and start taking thousands of images that will provide further details of the comet's major landmarks, its rotation speed and spin axis orientation. It will also make important measurements of the comet's gravity, mass and shape, and an initial assessment of its gaseous, dust-laden atmosphere, or coma.

Rosetta will rendezvous with its target in August 2014 and remain in its close proximity. After extensive mapping of the comet's surface during August and September, a landing site for the mission's 100 kg Philae probe will be chosen.

This major landing event is expected in November 2014. Philae will attempt to 'dock' using ice screws and harpoons to stop it from rebounding back into space.