Launched on March 2, 2004, from Europe’s Spaceport in Kourou, French Guiana, ESA's comet chaser Rosetta is scheduled to deploy it's lander, Philae, to the surface of Comet 67P/Churyumov–Gerasimenko on November 12, 2014. This will be humanity's first attempt to soft-land on a comet.

After the spacecraft entered comet's orbit on August 6, 2014, it was primarily observing it from a distance of around 100 km. Five landing sites were examined by the scientists. For this purpose, Rosetta approached to about 50 km from the comet. A prime landing site called "Site J" and a back-up landing site called "'Site C" have been chosen.

Philae will be dropped from around 22.5 km over the center of the comet at 08:35 UTC. The small robot will then free-fall until it makes contact about seven hours later. Because of the distance, the relay time between Rosetta and Earth will be approximately 28 minutes 20 seconds; so the confirmation of landing or disaster will arrive at around 16:00 UTC.

If the backup Site C is used, Philae will separate from Rosetta at 13:04 UTC at a height of just over 12 km from the center of the comet, and land approximately four hours later. Confirmation will arrive at around 17:30 UTC.

The landing gear weighs about 200 kilograms. Ten instruments on board the lander will be directly involved in the analysis of the composition and structure of the comet’s surface and subsurface materials. A drilling system will obtain samples down to 23 cm below the surface and will feed these to the spectrometers for analysis, such as to determine the chemical composition.

Other instruments will measure properties such as near-surface strength, density, texture, porosity, ice phases and thermal properties. Microscopic studies of individual grains will be conducted to know the texture. In addition, instruments on the lander will study how the comet changes during the day-night cycle, and while it approaches the Sun. 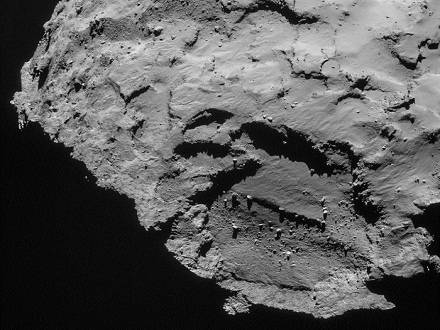 Site J was chosen unanimously over four other candidate sites as the primary landing site because the majority of terrain within a square kilometer area has slopes of less than 30° relative to the local vertical and because there are relatively few large boulders. The area also receives sufficient daily illumination to recharge Philae and continue surface science operations beyond the initial 64-hour battery-powered phase.

Even Site J presents some challenges. Philae may hit ice as hard as rock, or land in soft powder and sink. There are terrifying cliffs on the site. However, among all the candidates, Site J is best suited. 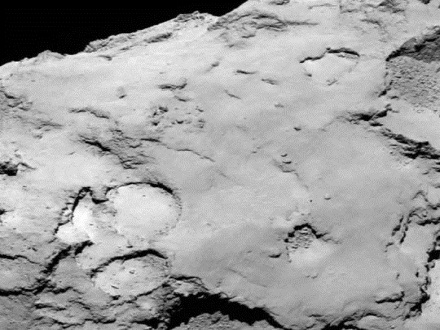 Final confirmation of the primary landing site and its landing scenario is expected to be made on October 14 after a formal Lander Operations Readiness Review.  This will also include results from additional surface exploration in the meantime. Should the backup site be chosen at this stage, landing can still occur on November 12.

During the same week, ESA will announce a competition to allow the public to name the primary landing site.

After the landing attempt the Rosetta orbiter will continue to study the comet and its environment using its 11 science instruments as they orbit the Sun together. The comet is on an elliptical 6.5-year orbit that takes it from beyond Jupiter at its furthest point, to between the orbits of Mars and Earth at its closest to the Sun.

Rosetta will accompany the comet for more than a year as they swing around the Sun and back to the outer Solar System again.