The first solar eclipse of 2014 will occur on April 29. This will be annular solar eclipse – the Moon will be too far away from the Earth to completely cover the Sun resulting in a ring of light around the darkened Moon. This eclipse occurs at the Moon's descending node in southern Aries.

This particular eclipse is rather unusual because the central axis of the Moon's antumbral shadow misses Earth entirely while the shadow edge grazes the planet. It is classified as a non-central annular eclipse, and such events are rare. Out of the 3,956 annular eclipses occurring during the 5,000-year period -2000 to +3000, only 68 of them or 1.7% are non-central (Espenak and Meeus, 2006).

The northern edge of the antumbral shadow first touches down in Antarctica at 05:57:35 UTC. The instant of greatest eclipse occurs just six minutes later at 06:03:25 UTC. For an observer at the geographic coordinates nearest the shadow axis (131° 15.6' E, 79° 38.7' S), the Sun would appear on the horizon during the 49-second annular phase. Six minutes later (06:09:36 UT), the antumbral shadow lifts off the surface of Earth as the annular eclipse ends. The entire zone of annularity appears as a small D-shaped region in eastern Antarctica.

A partial eclipse is seen within the much broader path of the Moon's penumbral shadow, that includes the southern Indian Ocean, the southern edge of Indonesia and all of Australia. 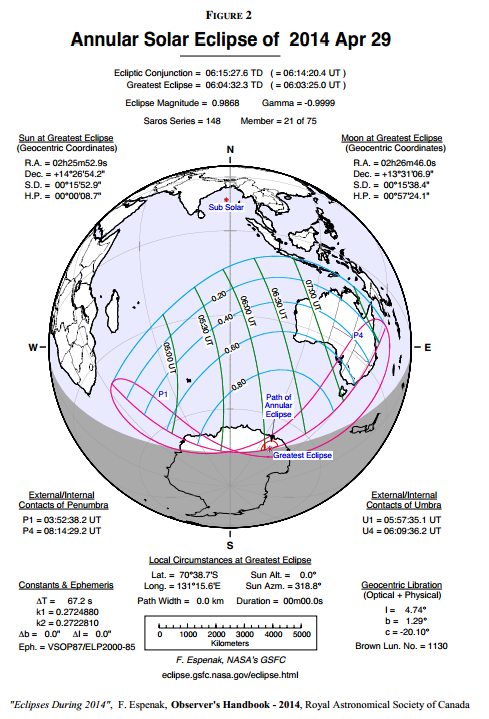 The next solar eclipse will occur on October 23, 2014. Although it will be only a partial solar eclipse, it is of particular interest because the event is widely visible from Canada and the USA.