A new phase of intense activity, with new lava flows, started at Ecuadorian Reventator volcano. The volcano had been in a state of intermittent strombolian explosions for the past few weeks but experienced a rapid increase in activity around 20:00 UTC on April 23, 2014.

Volcano Discovery reported that infrared images, collected by Culture Volcan, suggest a phase of lava fountaining or much stronger strombolian explosions took place. The apparent surge in lava emission also seems to have produced a new lava flow about 3 – 400 m long. This increase in activity is clearly visible in the corresponding seismic signal. 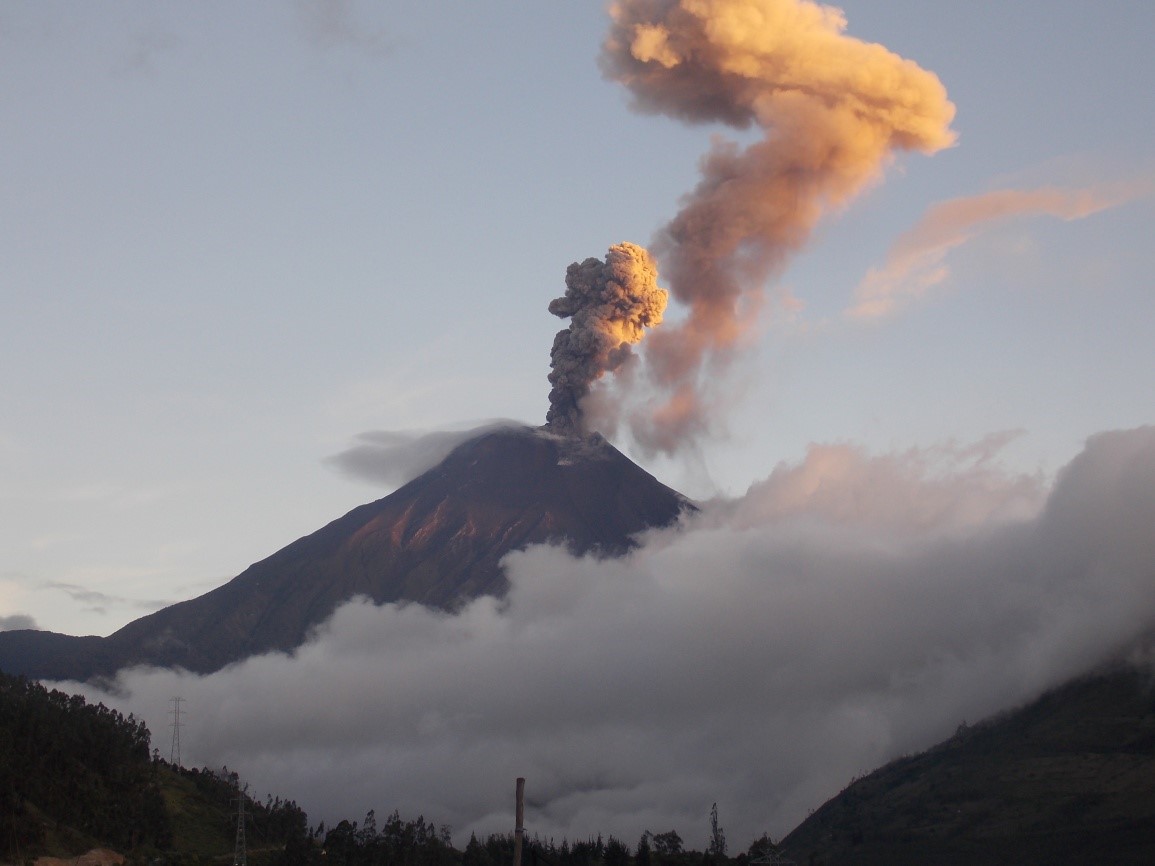 Activity at the volcano remained at moderate-to-high levels during April 16 – 22. Although cloud cover sometimes prevented visual observations of the crater, ash plumes were observed on most days and drifted mostly WSW. Crater incandescence was often observed at night and roaring was reported from local areas.

Reventador is the most frequently active of a chain of Ecuadorian volcanoes in the Cordillera Real, well east of the principal volcanic axis. The forested, dominantly andesitic Volcán El Reventador stratovolcano rises to 3562 m above the jungles of the western Amazon basin. A 4-km-wide caldera widely breached to the east was formed by edifice collapse and is partially filled by a young, unvegetated stratovolcano that rises about 1300 m above the caldera floor to a height comparable to the caldera rim. Reventador has been the source of numerous lava flows as well as explosive eruptions that were visible from Quito in historical time. Frequent lahars in this region of heavy rainfall have constructed a debris plain on the eastern floor of the caldera. The largest historical eruption at Reventador took place in 2002, producing a 17-km-high eruption column, pyroclastic flows that traveled up to 8 km, and lava flows from summit and flank vents. (GVP)

Tungurahua, a steep-sided andesitic-dacitic stratovolcano that towers more than 3 km above its northern base, is one of Ecuador's most active volcanoes. Three major volcanic edifices have been sequentially constructed since the mid-Pleistocene over a basement of metamorphic rocks. Tungurahua II was built within the past 14,000 years following the collapse of the initial edifice. Tungurahua II itself collapsed about 3000 years ago and produced a large debris-avalanche deposit and a horseshoe-shaped caldera open to the west, inside which the modern glacier-capped stratovolcano (Tungurahua III) was constructed. Historical eruptions have all originated from the summit crater. They have been accompanied by strong explosions and sometimes by pyroclastic flows and lava flows that reached populated areas at the volcano's base. Prior to a long-term eruption beginning in 1999 that caused the temporary evacuation of the city of Baños at the foot of the volcano, the last major eruption had occurred from 1916 to 1918, although minor activity continued until 1925. (GVP)