In a report published yesterday, new research suggests the enigmatic “ribbon” of energetic particles discovered at the edge of our solar system by NASA’s Interstellar Boundary Explorer (IBEX) may be only a small sign of the vast influence of the galactic magnetic field.

IBEX researchers have sought answers about the ribbon since its discovery in 2009. Comprising primarily space physicists, the IBEX team realized that the galactic magnetic field wrapped around our heliosphere — the giant “bubble” that envelops and protects our solar system — appears to determine the orientation of the ribbon and the placement of energetic particles measured in it.

An unlikely teaming of IBEX researchers with ultra-high-energy cosmic ray physicists, however, has produced complementary insights that dovetail with IBEX’s studies to produce a more complete picture of the interactions at the solar system boundary and how they reach much farther out into the space between the stars. 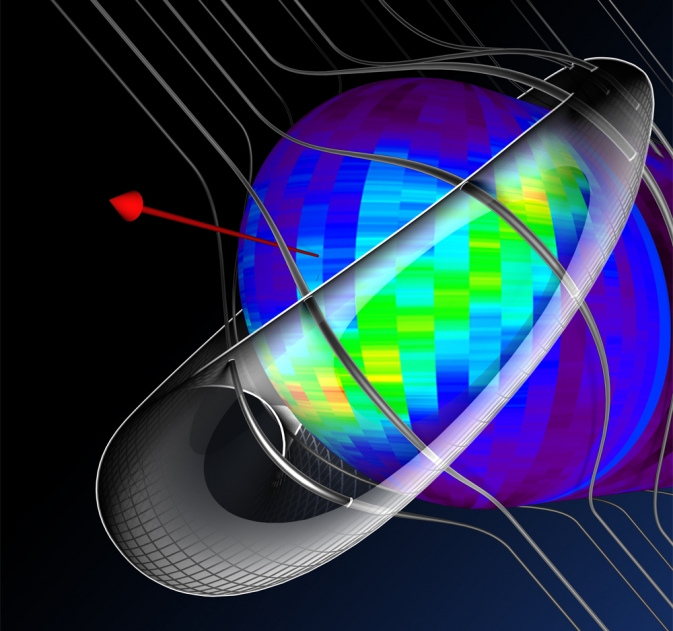 A model of the interstellar magnetic fields – which would otherwise be straight — warping around the outside of our heliosphere, based on data from NASA's Interstellar Boundary Explorer. The red arrow shows the direction in which the solar system moves through the galaxy. Image credit: NASA/IBEX/UNH

“The teraelectronvolt (TeV) particles measured by the team are incredible,” says Dr. David McComas, IBEX principal investigator and assistant vice president of the Space Science and Engineering Division at Southwest Research Institute. “Each one is up to 12 orders of magnitude more energetic than, for example, a photon of visible light coming from the Sun. To illustrate this scale, consider that $1 raised 12 orders of magnitude is $1,000,000,000,000 — a trillion dollars. These are super-high-energy cosmic rays made in some of the highest energy acceleration mechanisms that exist in the galaxy, such as supernovae.”

The amount of measured anisotropy is small, but clearly ordered by the galactic field that drapes around the heliosphere as measured from the IBEX ribbon, suggesting that the orientation of the magnetic field measured locally at our heliosphere extends much farther out into the galaxy than previously thought. As the high-energy particles arrive from the greater galaxy, they are affected by the magnetic field, leading to the observed anisotropy.

The magnetic fields in interstellar space proposed by IBEX predict that cosmic rays would come in as shown on the right – blue represents fewer rays. This looks similar to what is actually observed, shown on the left, thus supporting IBEX's findings. Image credit: NASA/IBEX/UNH

Thus far, combining the heliospheric and high-energy particle data into a simple model has shown good agreement with the observed anisotropy.

Voyagers 1 and 2 kicked off this area of research by taking point measurements as they reached the first outer boundary of our solar system in 2004 and 2007, respectively. IBEX greatly expanded on Voyager data by providing global images of the interactions at the boundary. In weather terms, this is analogous to a weather satellite making regional cloud and wind maps building on the data provided by a couple of weather stations. The addition of high-energy cosmic ray measurements provides data from interstellar distances, well outside our solar system — similar to a satellite gathering weather information across a continent.