We know much about how embryos develop, but one key stage – implantation – has remained a mystery. Now, scientists from Cambridge have discovered a way to study and film this 'black box' of development. Their results – which will lead to the rewriting of biology text books worldwide – are published in the journal Cell.

Embryo development in mammals occurs in two phases. During the first phase, pre-implantation, the embryo is a small, free-floating ball of cells called a blastocyst. In the second, post-implantation, phase the blastocyst embeds itself in the mother's uterus.

While blastocysts can be grown and studied outside the body, the same has not been true from implantation. And because embryos are so closely connected to their mothers, implantation has also been difficult to study in the womb.

According to study author Professor Magdalena Zernicka-Goetz of the University of Cambridge: "We know a lot about pre-implantation, but what happens after implantation – and particularly the moment of implantation – is an enigma."

Scientists are interested in studying implantation because the embryo undergoes huge changes in such a short space of time. 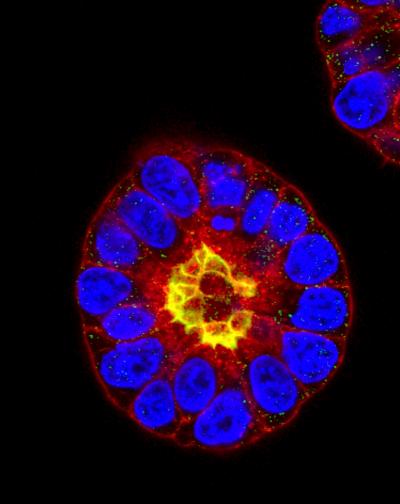 The mouse embryo's own stem cells organize themselves into a rosette-like arrangement as a pre-requisite for laying the foundations for the body when the embryo would implant into the uterus. Image credit: Magdalena Zernicka-Goetz and Ivan Bedzhov.

"During these two days, it goes from a relatively simple ball to a much larger, more complex cup-like structure, but exactly how that happens was a mystery – a black box of development. That is why we needed to develop a method that would allow us to culture and study embryos during implantation," she explained.

Working with mouse cells, Professor Zernicka-Goetz and her colleague Dr Ivan Bedzhov succeeded in creating the right conditions outside the womb to study the implantation process.

To be able to support development, they created a system comprising a gel and medium that, as well as having the right chemical and biological properties, was of similar elasticity to uterine tissue. Crucially, this gel was transparent to optical light, allowing then to film the embryo during implantation.

This new method revealed that on its way from ball to cup, the blastocyst becomes a 'rosette' of wedge-shaped cells, a structure never before seen by scientists.

"It's a beautiful structure. This rosette is what a mouse looks like on the 4th day of its life, and most likely what we look like on the 7th day of ours, and it's fascinating how beautiful we are then, and how these small cells organise so perfectly to allow us to develop."

As well as answering a fundamental question in developmental biology, the new method will allow scientists to study embryo growth and development at implantation for the first time, which could help improve the success of IVF, and extend our knowledge of stem cells, which could advance their use in regenerative medicine.

The findings also mean developmental biology text books will need rewriting. "The text books make an educated guess of what happened during this part of development, but we now know that what I learned and what I teach my students about this was totally wrong," said Professor Zernicka-Goetz.

Featured image: The mouse embryo's own stem cells organize themselves into a rosette-like arrangement as a pre-requisite for laying the foundations for the body when the embryo would implant into the uterus. Image credit: Magdalena Zernicka-Goetz and Ivan Bedzhov.