Following a slow gradual build-up of increasing strombolian activity and a swarm of earthquakes the New Southeast Crater (NSEC) of Etna has produced a new episode of lava fountaining (paroxysm) on the morning of October 26, 2013. This comes almost six months after the previous paroxysm.

A column of gas charged with pyroclastic material rose several kilometers above the summit of the volcano and was then blown by the wind toward southwest, affecting population centers as far as the Caltanissetta area.

Lava was emitted from the area of the "saddle" between the two cones of the Southeast Crater and advanced southward, destroying two wooden shacks at Torre del Filosofo; the lava then formed two lobes to the west and east of the 2002 – 2003 pyroclastic cone.

Another, smaller, lava flow descended the southeast flank of the NSEC cone, partially filling the deep collapse scar formed during the April 27, 2013 paroxysm.

At 08:19 GMT (=local time -2), vigorous ash emissions stared also at the Northeast Crater (NEC), forming a dark brown eruption column about 1 km tall; ash emission from that crater continued until the late evening. At the NSEC, the phase of lava fountaining continued until the late forenoon (GMT) and was followed by a long series of powerful explosions that produced loud detonations audible to many tens of kilometers away.

In the evening, isolate Strombolian explosions occurred at the NSEC; slow movement of the lava flows was observed during the day of October 27 (INGV). 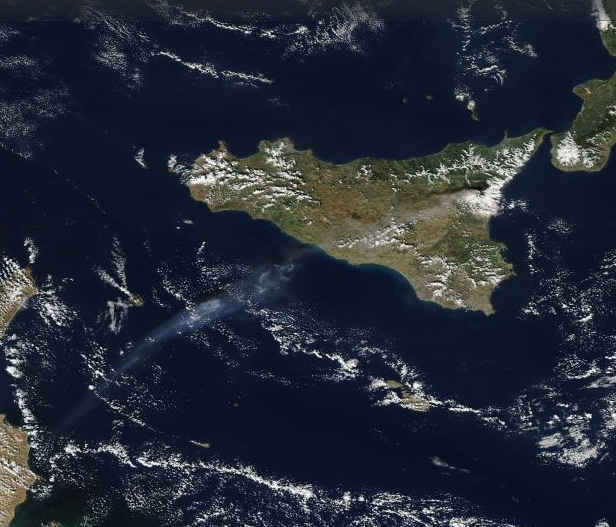 The following video was made by Dr. Boris Behncke. It is a short, unedited sequence of scenes recorded during the spectacular episode of lava fountaining (paroxysm) at the New Southeast Crater of Etna, with some additional action from the Northeast Crater, on the morning of October 26, 2013. Scenes were shot from his home, then from near S. Giovanni la Punta, near Fornazzo, near the Rifugio Citelli, and from the Rocca Capra (Valle del Bove). As usual, the last minute is rather sonically rewarding.

Etna is the largest and tallest volcano of Europe, and one of the most active volcanoes on the Earth. Its eruptions occur both at the summit, where currently there are four crateres, and from its flanks, down to a few hundred meters above the sea-level.  Summit activity can go on virtually continuously for many years or even decades (e.g., 1955-1971; 1995-2001), but it also often occurs during the intervals between flank eruptions. Such intervals can last from few months to more than 20 years, although in the past 40 years the average interval between flank eruptions has been only about 2 years. The duration of a flank eruption can be as short as a few hours, but in some cases exceed one year  (1991-1993: 472 days; 2008-2009: 419 days).

The four summit craters are: the Voragine and the Bocca Nuova, formed in 1945 and 1968, respectively, within the Central Crater; the Northeast Crater that exists since 1911 and is currently the highest point on Etna (3330 m); and the Southeast Crater, born in 1971, which has recently been the most active of the four craters. This configuration contrasts strongly with that of one century ago, when at the summit of Etna there was only the Central Crater (About Etna).