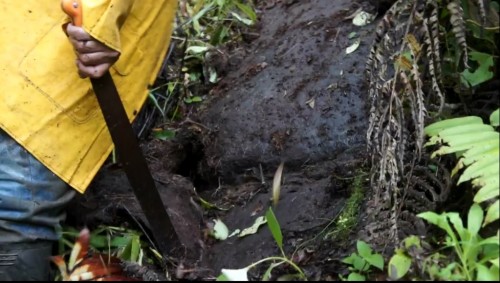 The revelations continue as we further explore the information coming out of the Ecuador jungles. What you see here is soil being cleared from the side of a large hill to reveal cut and dressed stone blocks. These appear quite smooth surfaced, barely aged thanks to the protective layer of earth. Between the blocks there appears to be a hard bonding substance like cement, or actually more like concrete. 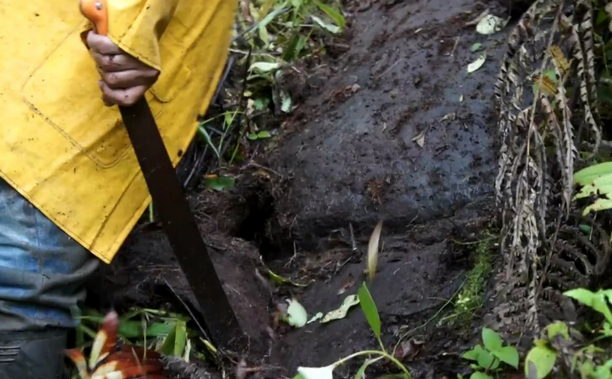 Just how long ago this structure was built and how many centuries passed before it was abandoned and then eventually swallowed completely by the local environment, this all remains a mystery. Some evidence is emerging from the site that can help us theorize on timing. The different look of the hidden blocks and those exposed are one of the first clues, it takes time to really weather a stone, to have it eaten away by the acidity of the rain for example. 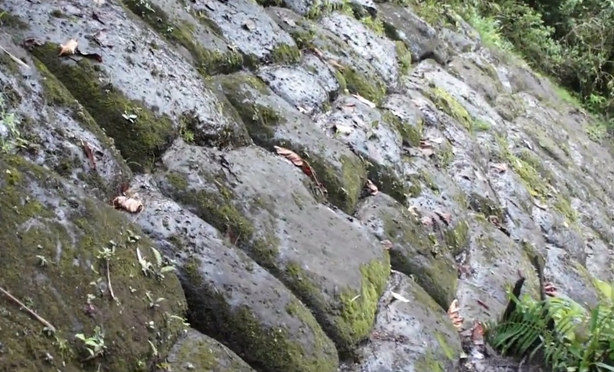 In this second image we observe the stark difference between the newly uncovered stonework and that of the already exposed wall. The working hypothesis at present is that either an earthquake or a tropical rainstorm induced land slide caused the soil and plants of one wall to come sliding down. This is most likely the case. What we can see by comparison of the two walls is that the event that caused the wall to become exposed must have happened centuries ago, the stonework is extremely eroded on the visible wall.

I am not qualified to give an accurate projection of how many centuries it would take to turn the wall in our first image into that seen in the second image – my guess is several at least. This certainly helps to reinforce the suspicion that this is a truly ancient site, much older than others already known in Ecuador, click the embedded links to see structures built by the native Inca , Canari or Cara peoples for examples. 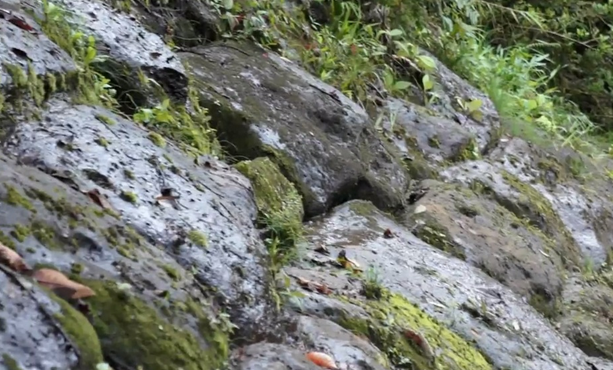 The blocks range in shape and size across the pyramid wall, it appears highly chaotic in style and would pose interesting construction problems for the engineers and builders of the time it was built. We see similar stone-working at ancient sites in Peru, for example the fort at Sacsayhuaman which although attributed to the Inca is actually claimed by local Indians to have been built by a giant bird that came from the sky with the ability to melt rocks.

Sounds more like a visitation from a race of extraterrestrials with advanced technology than some kind of insane local building project, especially when we consider the weight of some of the blocks, almost 200 tonnes. How can we readily credit a supposed primitive technology with easily working with gigantic blocks, that even today would be almost impossible to work with for a building construction? 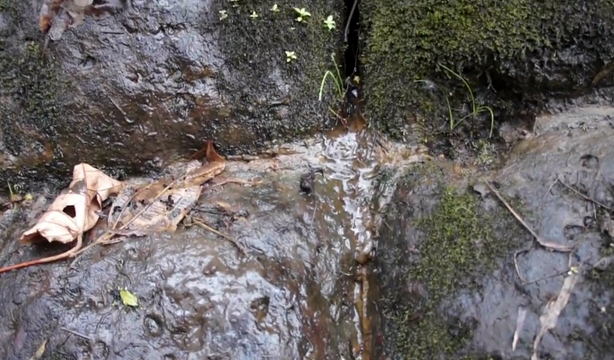 One of the most captivating features of the pyramid wall seen at the jungle site here, has to be the evidence of some kind of strange mortar between stones. It is generally held that the Inca did not use mortar but rather made blocks that would fit perfectly together. Yet in this case we see what certainly appears to be a bonding material remaining between some of the large cut stone blocks. A closer look leaves us scratching our heads as it now seems to perhaps we are looking not at a cement, but some kind of vitrified material, was the stone itself melted by some advanced technology, whether heat inducing or chemical? Though many blocks seem free of this substance we can again attribute that to a very long period of rainfall – the substance looks tough and I imagine a great deal of time passed before it was eroded away. Evidence for other examples of vitrified stone has been seen elsewhere at ancient sites in Latin America. 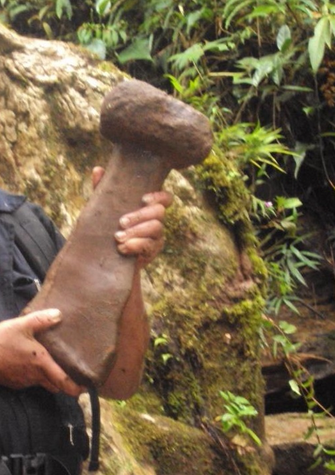 Yet none of what we have already discussed is really good evidence for my stating in places that this is a lost pyramid city of giant people. Yes there are legends in the area of giants, and at other sites in Ecuador remains or artifacts have been found that do seem to prove a presence of incredibly large people. What really strongly points towards this habitation having housed the same race of giants is the presence of extremely oversized hammers, or at least the stone hammerheads. Assuming these were attached to hard wood handles they would be of both incredible size and weight, making their use as tools impractical for a typical Inca or indigenous Indian, these being generally slight built people of around  five foot or so. Who on Earth would make a hammer like this as a real tool? Remember also that any work would be done in the incredible heat and humidity of the Amazon jungle, how long could anyone swing such a thing before collapsing from heat exhaustion? I have been unable to match this object to anything known in Inca archeology, and in fact there is simply nothing like it in the Ecuadorian museum of cultural history, located in Quito, that would suggest any of the known civilizations of this region. What it rather makes one think of is the legends of the ancient Anunnaki and their supposed human-alien hybrid creations used as a slave race to mine and work gold.

Why do I jump straight to the Anunanki, you may well ask, after all this is the Amazon not Sumeria. There are several good reasons for my leap, the first is that we have evidence of giants in a pyramid city located next to a source of gold, this fits the Anunanki legends.

The second reason for my intuitive leap is that elsewhere in Ecuador, in fact not so very far from this actual ruin, there have been found a number of objects decorated with images of Sumerian deities or even engraved with Sumerian writing , known today as the Father Crespi collection for the keeper of these objects. The location from which these objects came was said by the local Shuar tribe to be a cave system known as the Tayos Caves, which contained not only these relics in precious metals, but also supposedly a hall of records made up of engraved gold sheets called the metal libary.

The wisdom of the ancients, and the evidence of their civilizations, is now in the process of returning to the awareness of people all over this planet.

“We are the ones that we have been waiting for.” – Hopi proverb