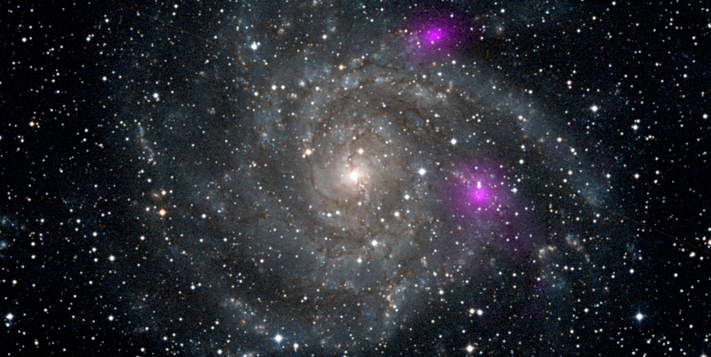 Nuclear Spectroscopic Telescope Array, or NuSTAR, is giving the wider astronomical community a first look at its unique X-ray images of the cosmos. The first batch of data from the black-hole hunting telescope was made publicly available on August 29, 2013 via NASA's High Energy Astrophysics Science Archive Research Center, or HEASARC.

"We are pleased to present the world with NuSTAR's first look at the sky in high-energy X-rays with a true focusing telescope," said Fiona Harrison, the mission's principal investigator at the California Institute of Technology, Pasadena.

The images, taken from July to August 2012, shortly after the spacecraft launched, comprise an assortment of extreme objects, including black holes near and far. The more distant black holes are some of the most luminous objects in the universe, radiating X-rays as they ferociously consume surrounding gas.

One type of black hole in the new batch of data is a blazar, which is an active, supermassive black hole pointing a jet toward Earth. Pairs of black holes called X-ray binaries, in which one partner feeds off the other, are also in the mix, along with the remnants of stellar blasts called supernovas. 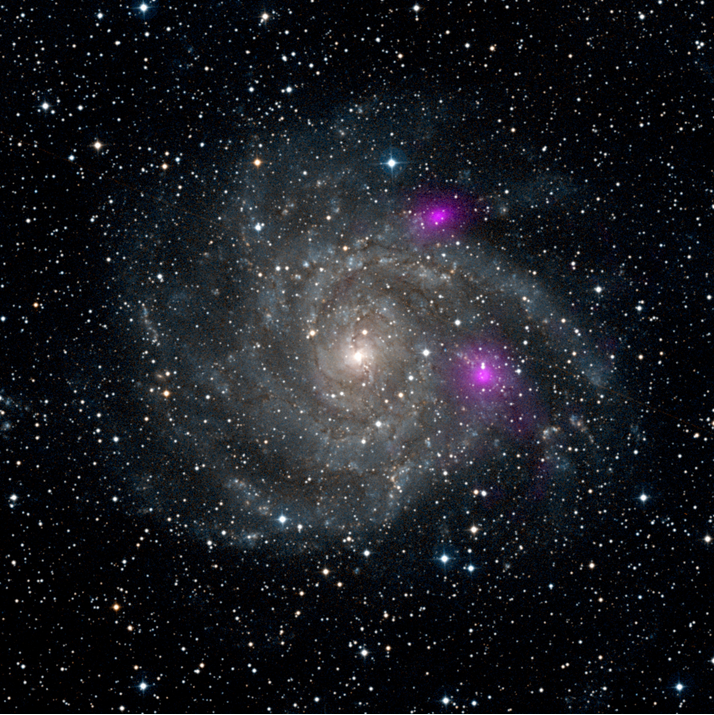 This new view of spiral galaxy IC 342, also known as Caldwell 5, includes data from NASA's Nuclear Spectroscopic Telescope Array, or NuSTAR. High-energy X-ray data from NuSTAR have been translated to the color magenta, and superimposed on a visible-light view highlighting the galaxy and its star-studded arms. NuSTAR is the first orbiting telescope to take focused pictures of the cosmos in high-energy X-ray light; previous observations of this same galaxy taken at similar wavelengths blurred the entire object into one pixel.

The two magenta spots are blazing black holes first detected at lower-energy X-ray wavelengths by NASA's Chandra X-ray Observatory. With NuSTAR's complementary data, astronomers can start to home in on the black holes' mysterious properties. The black holes appear much brighter than typical stellar-mass black holes, such as those that pepper our own galaxy, yet they cannot be supermassive black holes or they would have sunk to the galaxy's center. Instead, they may be intermediate in mass, or there may be something else going on to explain their extremely energetic state. NuSTAR will help solve this puzzle.

IC 342 lies 7 million light-years away in the Camelopardalis constellation. The outer edges of the galaxy cannot be seen in this view.

The data set only contains complete observations. Data will be released at a later date for those targets still being observed.

"Astronomers can use these data to better understand the capabilities of NuSTAR and design future observing proposals. The first opportunity will be this fall, for joint observations with XMM-Newton," said Karl Forster of Caltech, who is leading the effort to package the data for the public.

Astronomers can compare data sets from different missions using HEASARC, which gives them a broader understanding of an object of interest. NuSTAR's high-energy observations help scientists bridge a gap that existed previously in X-ray astronomy, and will lead to new revelations about the bizarre and energetic side of our universe. 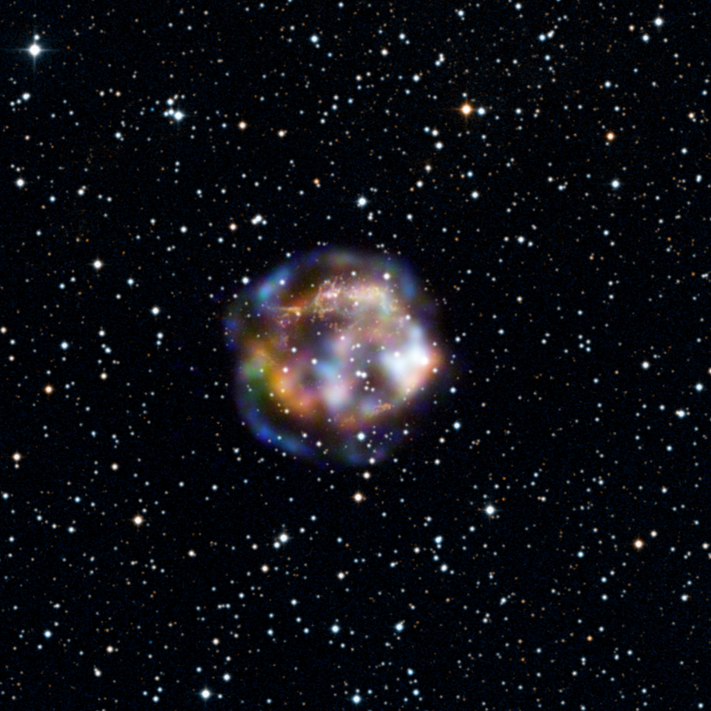 This new view of the historical supernova remnant Cassiopeia A, located 11,000 light-years away, was taken by NASA's Nuclear Spectroscopic Telescope Array, or NuSTAR. Blue indicates the highest energy X-ray light, where NuSTAR has made the first resolved image ever of this source. Red and green show the lower end of NuSTAR's energy range, which overlaps with NASA's high-resolution Chandra X-ray Observatory.

Light from the stellar explosion that created Cassiopeia A is thought to have reached Earth about 300 years ago, after traveling 11,000 years to get here. While the star is long dead, its remains are still bursting with action. The outer blue ring is where the shock wave from the supernova blast is slamming into surrounding material, whipping particles up to within a fraction of a percent of the speed of light. NuSTAR observations should help solve the riddle of how these particles are accelerated to such high energies

NuSTAR mission was launched on June 13, 2012, and it is the first focusing high-energy X-ray telescope in orbit. NuSTAR operates in the band from 3 to 79 keV, extending the sensitivity of focusing far beyond the ~10 keV high-energy cutoff achieved by all previous X-ray satellites. The inherently low background associated with concentrating the X-ray light enables NuSTAR to probe the hard X-ray sky with a more than 100-fold improvement in sensitivity over the collimated or coded mask instruments that have operated in this bandpass. Using its unprecedented combination of sensitivity and spatial and spectral resolution, NuSTAR will pursue five primary scientific objectives:

(1) probe obscured active galactic nucleus (AGN) activity out to the peak epoch of galaxy assembly in the universe (at z <~ 2) by surveying selected regions of the sky;

(2) study the population of hard X-ray-emitting compact objects in the Galaxy by mapping the central regions of the Milky Way;

(3) study the non-thermal radiation in young supernova remnants, both the hard X-ray continuum and the emission from the radioactive element 44Ti;

(4) observe blazars contemporaneously with ground-based radio, optical, and TeV telescopes, as well as with Fermi and Swift, to constrain the structure of AGN jets; and

(5) observe line and continuum emission from core-collapse supernovae in the Local Group, and from nearby Type Ia events, to constrain explosion models.

During its baseline two-year mission, NuSTAR will also undertake a broad program of targeted observations. The observatory consists of two co-aligned grazing-incidence X-ray telescopes pointed at celestial targets by a three-axis stabilized spacecraft. Deployed into a 600 km, near-circular, 6o inclination orbit, the observatory has now completed commissioning, and is performing consistent with pre-launch expectations.

After observatory activation, and a calibration and a verification phase, the first sets of NuSTAR data became publicly available on August 29th, 2013 through NASA's High Energy Astrophysics Science Archive Research Center (HEASARC). NuSTAR data are most easily accessible via the usual HEASARC archive interfaces, i.e.,Browse and Xamin, specifically making use of the master table of NuSTAR data sets archived at the HEASARC, the NUMASTER table. Notice that some of these data sets may not yet be public: users should check the public_date parameter in NUMASTER to determine the public availability of observations. Proprietary data are indicated by having either a null value or a future date for the public_date parameter in the NUMASTER table. Users can query this table and download the data associated with the selected observation(s) using the usual Browse/Xamin procedures. Expert users who already know the Observation IDs (ObsIDs) of the dataset(s) in which they are interested, can also directly access NuSTAR data via the HEASARC's ftp site.

It is expected that additional datasets will be released in October and December 2013, and that by early 2014 the HEASARC Archive will have 'caught up' with the available NuSTAR data: from then on, the data for a NuSTAR observation should become public no more than 60 days after the completion of that observation. The exceptions to this rule are:

c) Observations with significant quality issues whose release may be delayed until the NuSTAR SOC determines the impact on science analysis.