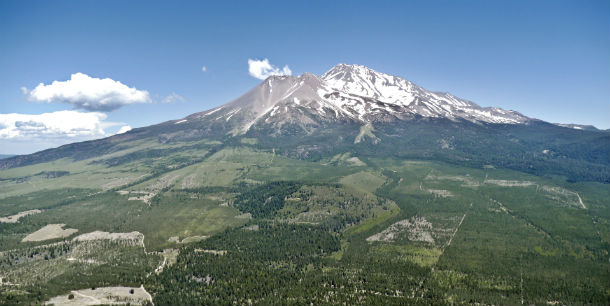 Mount Shasta volcano showed signs of elevated seismicity since June 11, 2013. The volcano typically displays a relatively low rate of earthquake occurrence. Earthquake-Report connects the recent uptick in seismicity at Mount Shasta, the Greenville earthquake sequence, several deep (30-40 km depth) events beneath the Klamath Mountains to the west, as well as recent small earthquakes at Lassen Peak; and relates them with ended slow-slip event along the subducted slab beneath the region. Slow-slip occurs when the overlying crustal plate periodically (and only partially) detaches from the underlying (subducting) oceanic plate and slowly slips (millimeters/day) westward (contrary to its normal eastward movement) over a period of days to weeks. The events occur about every 14 months beneath Washington and British Columbia, about every two years beneath Oregon (one just occurred there earlier this year!), and yearly beneath Northern California. 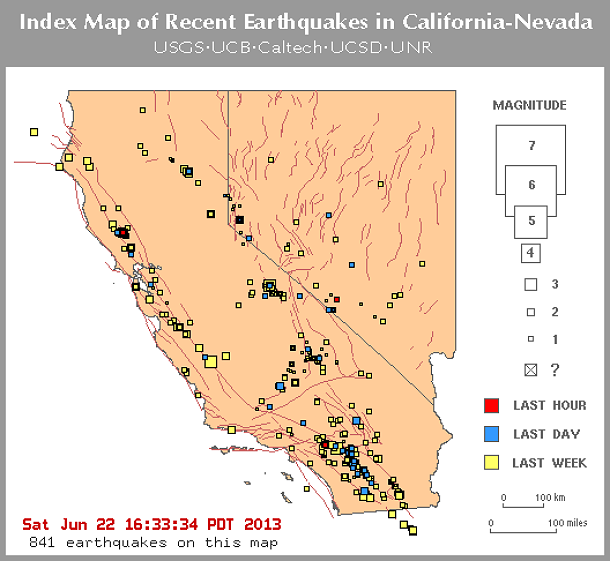 Recent earthquake activity could also mean that volcano is simply “re-adjusting” to relatively rapid crustal movement which has occurred in the region this past month.

The Cascade Range includes many impressive stratovolcanoes along its north-south extent, some active during the past few hundred years. Mount Shasta in northern California is among the largest and most active (over the past 4,000 years) of the volcanoes in the Cascades. The summit peak stands at an elevation of 4,317 meters (14,160 feet) above sea level, and is formed by the Hotlum cone – the location of the most recently recorded volcanic activity (in 1786). Shasta’s summit is high enough to retain snow cover throughout the year, and several small glaciers are present along the upper slopes. 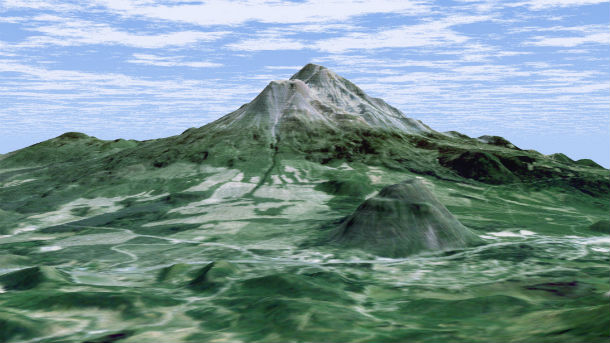 Mount Shasta is located in the Cascade Range in northern California about 65 kilometers (40 miles) south of the Oregon-California border and about midway between the Pacific Coast and the Nevada border. One of the largest and highest of the Cascade volcanoes, snowclad Mount Shasta is near the southern end of the range that terminates near Lassen Peak. Mount Shasta is a massive compound stratovolcano composed of overlapping cones centered at four or more main vents; it was constructed during a period of more than 100,000 years. Each of the cone-building periods produced pyroxene-andesite lava flows, block-and-ash flows, and mudflows originating mainly at the central vents. Construction of each cone was followed by eruption of domes and pyroclastic flows of more silicic rock at central vents, and of domes, cinder cones, and lava flows at vents on the flanks of the cones. 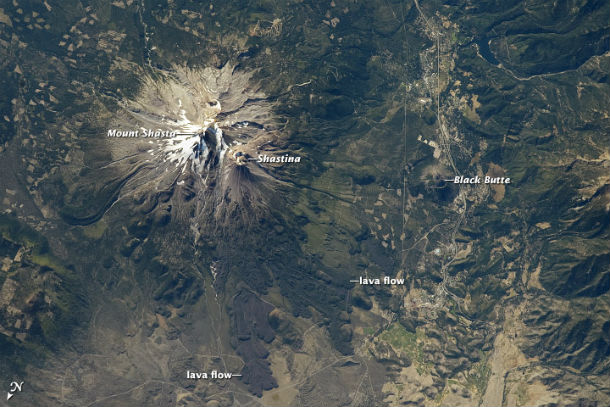 Astronaut photograph ISS033-E-6245 was acquired on September 20, 2012, The image of Mount Shasta was taken by the Expedition 33 crew. (Credit: NASA/JSC Gateway to Astronaut Photography of Earth. Caption by William L. Stefanov, Jacobs/ESCG at NASA-JSC.)

Two of the main eruptive centers at Mount Shasta, the Shastina and Hotlum cones were constructed in the last 10,000 years. Holocene eruptions also occurred at Black Butte, a group of overlapping dacite domes about 13 kilometers (8 miles) west of Mount Shasta. Evidence of geologically recent eruptions at these two main vents and at flank vents forms the chief basis for assessing the most likely kinds of future eruptive activity and associated potential hazards.