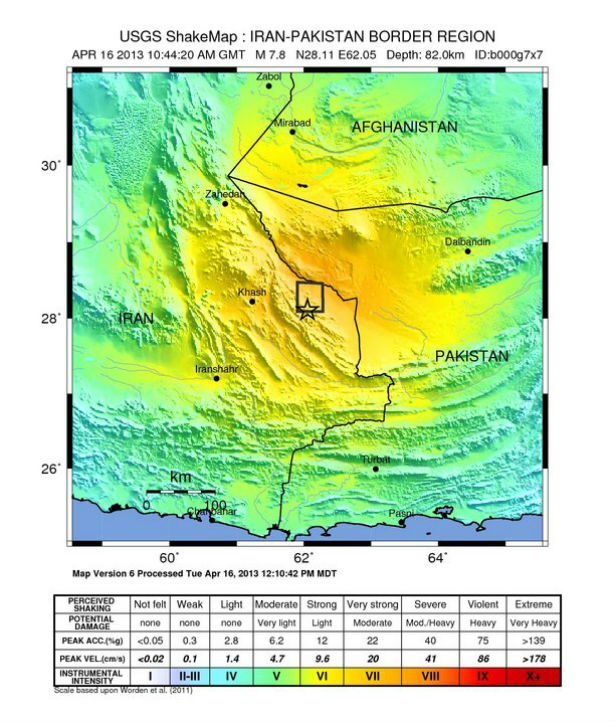 A powerful M 7.8 earthquake hit southeastern Iran area, near the Pakistan border on April 16, 2013. Strong ground motions extended more than 150 miles from the epicenter, and the earthquake was widely felt in the region. Preliminary reports indicate dozens of fatalities and more than 850 people injured, with damage concentrated in the immediate area of the earthquake. The sparsely populated and remote region of this earthquake has limited the potential for broader effects from this event.

The USGS PAGER estimates a population of approximately 2,000 were exposed to this severe (MMI VIII) level of shaking and 377,000 to very strong shaking (MMI VII) with moderate to heavy damage potential. Earthquake ruptures at this depth (an estimated 80 km) tend to present lower ground motions in the epicentral region than do shallower earthquakes. 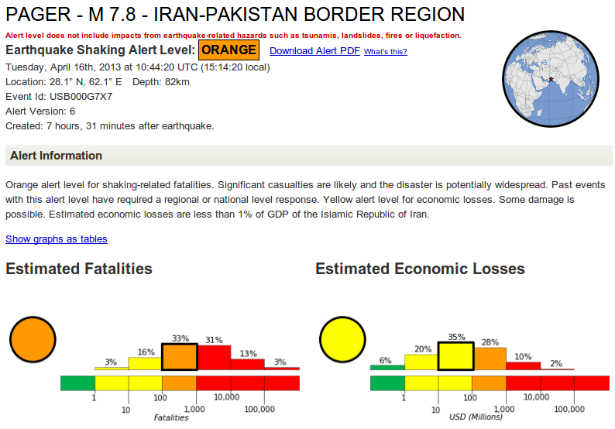 In general, construction of structures in this area are highly vulnerable to earthquake shaking, as has been observed in past earthquakes. Some earthquake resistant structures do exist in the region, but the dominant construction types are adobe block and unreinforced brick with timber floor construction. There are reports of partial building collapses in the epicentral area.

This event was felt over a broad region, with reports of shaking as far away as Dubai and New Delhi. Reports of buildings swaying in Dubai cause concern for insurers because of the significant amount of insured exposure in the United Arab Emirates city.

A state of emergency was declared in the epicentral area, but initial reports are indicating little damage. The loss to the insurance industry is not expected to be significant as the insurance penetration is very low in this region, however this event is very important because it is not unlike other events that can occur in similar built environments. As such, there is much we can learn from events like this.

The focal mechanism for the April 16, 2013 earthquake, as produced by the US Geological Survey, indicates normal faulting for this intraplate earthquake that occurred approximately 80 km deep, in the Arabian Plate. The M 7.8 earthquake is the largest to strike Iran in more than 50 years. 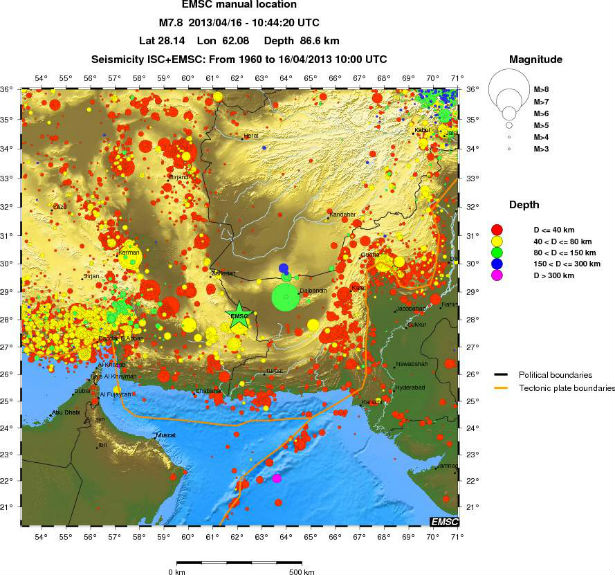 The tectonic setting of this region is a subduction zone environment, where the Arabia and India plates are colliding with the Eurasia Plate. The subducted Arabia plate is seismically active, with earthquakes recorded up to depths of approximately 160 km. The frequency of moderate and large earthquakes within the Arabian plate is not high compared with similar events in some other subducted plates around the world, but several earthquakes have occurred within this slab in the region of today’s event over the past 40 years, including a M 6.7 event 1983 and a M 7.2 in 2011, according to the USGS.