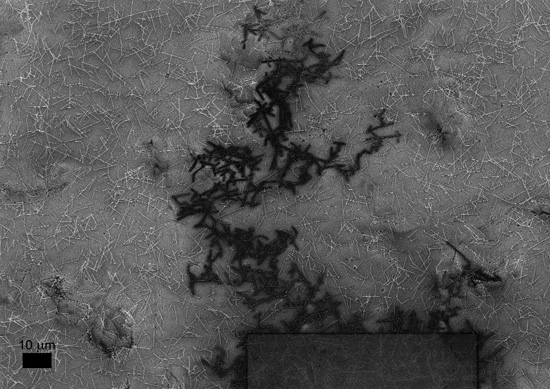 Irish nanoscientist, Prof John Boland, director of the Centre for Research on Adaptive Nanostructures and Nanodevices (CRANN), believes that his research can lead to producing nanowire networks that can mimic aspects of the human brain and eventually lead to a new breed of computers.

Boland has been awarded €2.5m ($3.2 million) from the European Research Council (ERC), to continue his research into how nanowire networks can potentially help produce new smart materials, digital memory applications, sensors, and possibly the next generation of computers.

The team at CRANN will use the funding with the aim of creating computer networks that can mimic the functions of the human brain and greatly improve on computer capabilities like facial recognition.

Image of a nanowire network. The electrical connectivity of such networks can be visualised using a scanning electron microscope in CRANN’s Advanced Microscopy Lab

Nanowires, made of materials such as copper or silicon, are spaghetti-like structures that are just a few atoms thick and can be engineered into networks.

Researchers around the globe are investigating the possibility of using nanowires in solar power generating technologies. Also they are trying to find out if nanowires could deliver the next generation of computers.

Boland explained that he has discovered that exposing a random network of nanowires to stimuli like electricity, light and chemicals generates a chemical reaction at the junctions where the nanowires cross, corresponding to synapses in the brain.

According to Boland, by controlling the stimuli, it might then be possible to harness these reactions to manipulate the connectivity within the network. Boland added that this breakthrough could eventually allow computations that mimic the functions of neurons — particularly the development of associative memory functions.

“The human brain is neurologically advanced and exploits connectivity that is controlled by electrical and chemical signals. My research will create nanowire networks that have the potential to mimic aspects of the neurological functions of the human brain, which may revolutionize the performance of current day computers,” he explained.

This project at CRANN combines work in nanowires and memristors, which have the ability to “remember” a charge.

Featured image: Image of a nanowire network. The electrical connectivity of such networks can be visualised using a scanning electron microscope. Credit: CRANN’s Advanced Microscopy Lab