Neural stem cell (NSC) based therapy holds promise for treating numerous neurological disorders. In this treatment, NSCs require scaffolds to provide micro-environments for their growth and differentiation. In 2011, Korean researchers had reported that graphene sheets can support the required growth and differentiation of NSCs. Now, for the first time, Chinese researchers have come up with the application of graphene foam as efficient NSC scaffolds.

This novel in vitro (arranged in artificial conditions outside the body) technique uses three-dimensional (3D) porous graphene foam. The study also found that while acting as scaffolds, these foams can also control NSCs electrically. Using cyclic voltammetry, researchers explored the electrical characteristics of graphene foam. They found that NSCs can be stimulated through capacitive charge injection, just like 2D graphene film electrodes. Although, because the 3D graphene foam covers the larger surface area, it can inject a much stronger charge than 2D graphene sheets and thereby improve the electrical stimulation performance of the conductive scaffold.

Using a Nickle foam template, graphene foams were synthesized by the chemical vapor deposition method. The resultant graphene skeleton had a width of around 100-200 μm whereas the whole porous structure averaged 100-300 μm, observations under an electron microscope revealed. The surface chemistry of 3D-GFs was further characterized by X-ray photoelectron spectroscopy (XPS). 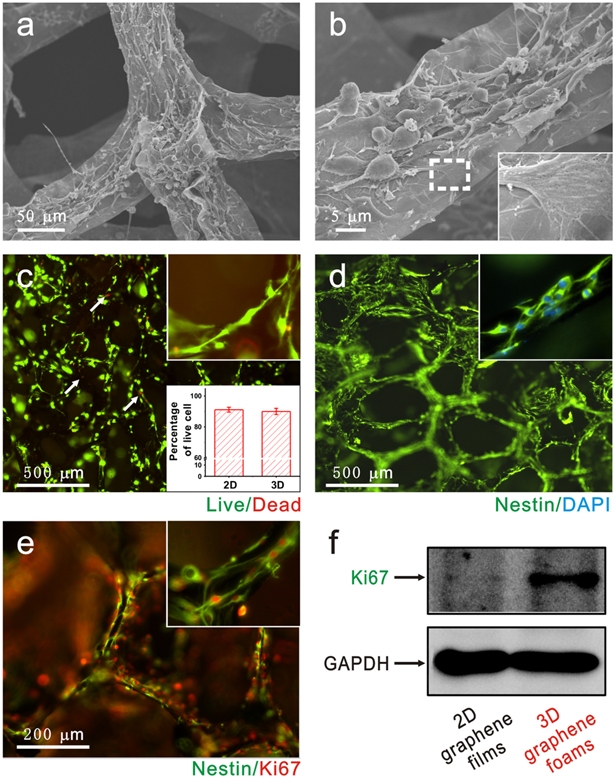 The NSCs are a self-renewing and multipotent cell population in the central nervous system. Stem cells are characterized by their capability to differentiate into multiple cell types via exogenous stimuli from their environment. Regenerative NSCs are used in cell replacement therapy to tackle cell death which causes acute Central Nervous System (CNS) disorders and neurodegenerative disease. Patients with these disorders suffer from a lack of regenerative abilities for cell replacement and repair. Provided that graphene foam can not only house the NSCs but also control them electrically, it stands in competition with existing substrates for neural cell-based therapy like glass or polymer PDMS.

Human neural stem cells freshly dispersed by Accutase seeded on the glass coverslip bottom of a WPI Fluorodish. The total video time of 2:47 corresponds to a total time in culture of 6 days.

Potentially, graphene foam has widespread application, ranging from gas sensors to Helium substitute. Graphene itself is biodegradable, which gives it an edge over many toxic substances it aims to substitute. In addition to this medical application of graphene foam, recent advancements in graphene research have been tantalizing and promise to revolutionize our technology while keeping our progress sustainable.