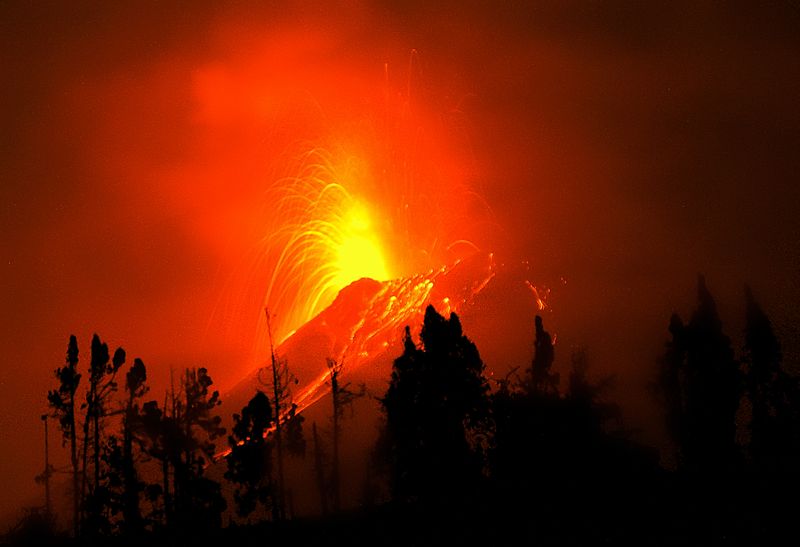 After eruption on Saturday, activity intensified at Ecuadorian volcano Tungurahua on Sunday, March 10, 2013. It spewed glowing ash and pyroclastic material 1.24 miles (about 2 km) into the air, reported CBS12. The head of the risk unit for the nearby municipality of Banos del Agua Santa, Javier Mayorga said; as a precautionary measure, access to the area around the volcano had been restricted. He further said,

“We have determined sites from where we can see the volcano. We have searched for safe look-out sites because in the areas where there is greatest visibility towards the volcano, we cannot guarantee the safety of visitors. That is why we have restricted access to the volcano.”

With a summit elevation of 16,479 feet, Tungurahua is a steep-sided andesitic-dacitic stratovolcano that towers more than 3 km above its northern base and is one of Ecuador’s most active volcanoes. Three major volcanic edifices have been sequentially constructed since the mid-Pleistocene over a basement of metamorphic rocks. Tungurahua II was built within the past 14,000 years following the collapse of the initial edifice. Tungurahua II itself collapsed about 3000 years ago and produced a large debris-avalanche deposit and a horseshoe-shaped caldera open to the west, inside which the modern glacier-capped stratovolcano (Tungurahua III) was constructed (GVP).

Historical eruptions have all originated from the summit crater. They have been accompanied by strong explosions and sometimes by pyroclastic flows and lava flows that reached populated areas at the volcano’s base. Prior to a long-term eruption beginning in 1999 that caused the temporary evacuation of the city of Baños at the foot of the volcano, the last major eruption had occurred from 1916 to 1918, although minor activity continued until 1925.

Last episode or eruption was in December and volcano had shown notable increase in seismic activity since February 25.