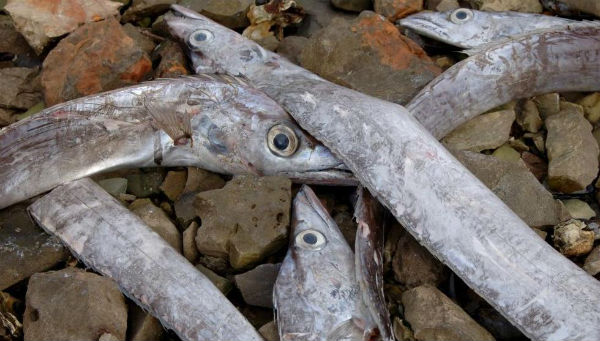 Several hundred unusual fish, about a meter and a half long, stranded on the shores of Valelunga beach near Pula, Croatia in Adriatic Sea on February 4/5, 2013, the same day that M 4.5 struck the region. Several hundred fish, which can live as dead. Eyewitnesses were trying to get them back into the deeper water but the fish was constantly coming back.

According to biologist Neven Iveša, it is probably Trahipterus trahypterus, also known as the fish sword, which usually live in a depth of 200 to 500 meters and very rarely comes to the surface. Iveša said it was possible that the fish ran aground because the wind cooled the shallower parts of the northern Adriatic and experienced temperature shock and then ran aground. Iveša did not exclude the possibility that they are stranded due to the recent earthquake in Dalmatia, which could lead to changes in the marine ecosystem. 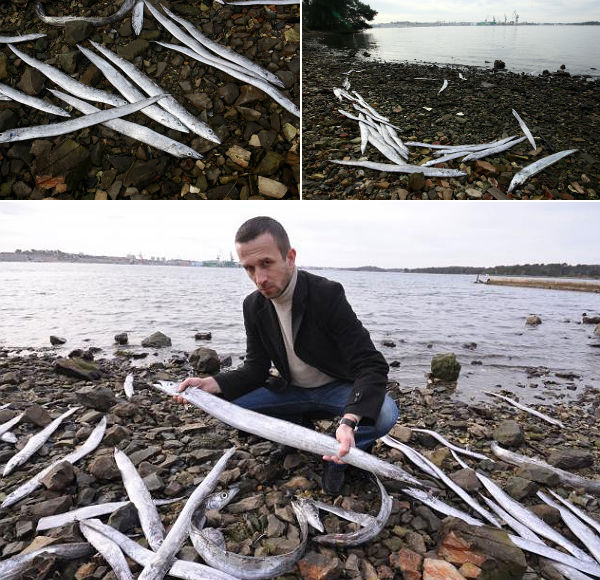 Hundreds of an unusual fish stranded on at the beach near Pula in Adriatic Sea (Credit: Goran Šebelić/Duško Marušić)

The fish sword live in deeper water that are located around Dalmatia region, which was hit by recent earthquakes and the location of beaching is located farther north were the maximum sea depth is about 100-150 meters. 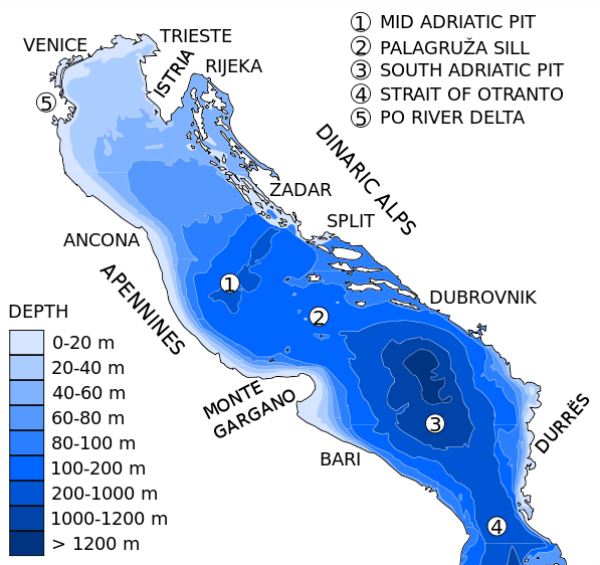 EMSC reported M 4.4 at depth of only 2 km on February 4, 2013 with epicenter 14 km of Trogir, near town of Split. USGS registered M 4.5 at 10 km, while local seismographs recorded M 4.1. That was already third M4+ earthquake that struck the same area from the beginning of the year.

An unbroken zone of increased seismic activity borders the Adriatic Sea, with a belt of thrust faults generally oriented in the northeast–southwest direction on the east coast and the northeast–southwest normal faults in the Apennines, indicating an Adriatic counterclockwise rotation. An active 200-kilometre (120 miles) fault has been identified to the northwest of Dubrovnik, adding to the Dalmatian islands as the Eurasian Plate slides over the Adriatic microplate. Furthermore, the fault causes the Apennine peninsula’s southern tip to move towards the opposite shore by about 0.4 centimetres (0.16 in) per year. If this movement continues, the seafloor will be completely consumed and the Adriatic Sea closed off in 50–70 million years. In the Northern Adriatic, the coast of the Gulf of Trieste and western Istria is gradually subsiding, having sunk about 1.5 metres (4 ft 11 in) in the past two thousand years.

In the Middle Adriatic Basin, there is evidence of Permian volcanism in the area of Komiža on the island of Vis and the volcanic islands of Jabuka and Brusnik. Earthquakes have been observed in the region since the earliest historical records. In the last 600 years, fifteen tsunamis have occurred in the Adriatic Sea.