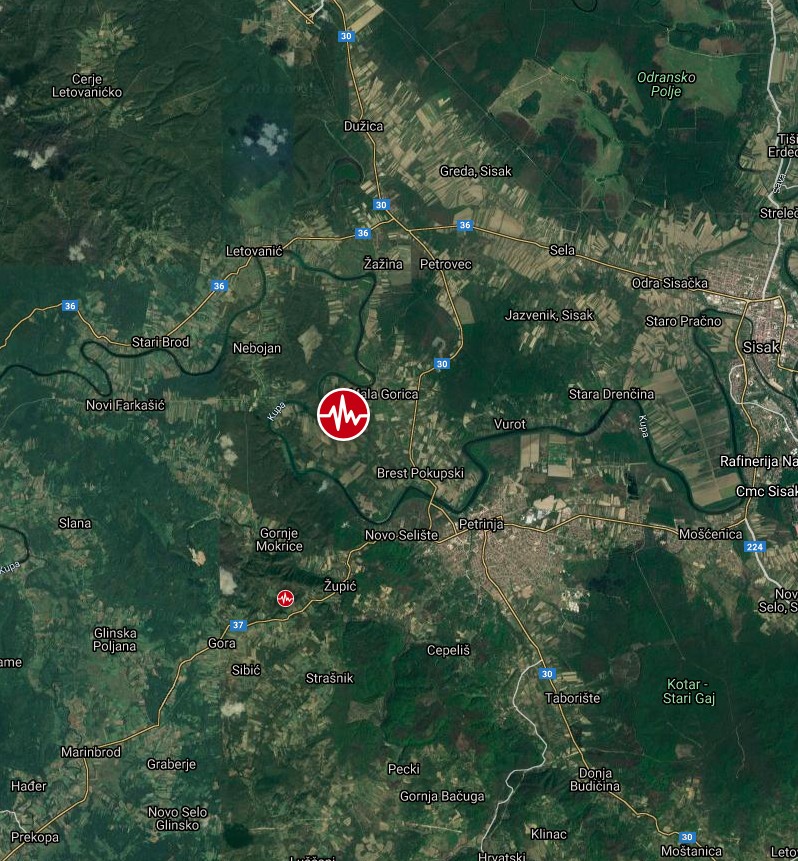 Numerous homes and buildings have been damaged / collapsed, in and around the city of Petrinja.

Rescue teams are searching through the rubble.

Many people have been injured. The first confirmed victim was a 12-year-old girl from the city of Petrinja.

Power outages have been reported, internet and telecommunication services near the epicenter are down.

Reports from a village near Petrinja say 9 out of 10 homes in the village have collapsed.

People across the region are still in the streets, including in the capital Zagreb — still suffering from a series of destructive earthquakes in March 2020 (the strongest since 1880).

Croatian town of Petrinja suffered a lot of damage in the earthquake today pic.twitter.com/W7ypSFj5vR

This young boy was pulled from the rubble after an earthquake in Croatia.

The 6.3 magnitude quake hit Croatia, with reports of one death, "many" injuries and damaged buildings near Zagreb.

This region was hit by several moderately strong and damaging earthquakes on December 28 — including M5.2 at 05:28 UT and M4.9 at 06:49 UTC. When today's earthquake struck, many people were in already damaged homes, evaluating damage or trying to repair it.

Aftershocks are still shaking the region, including dozens above M2.5. 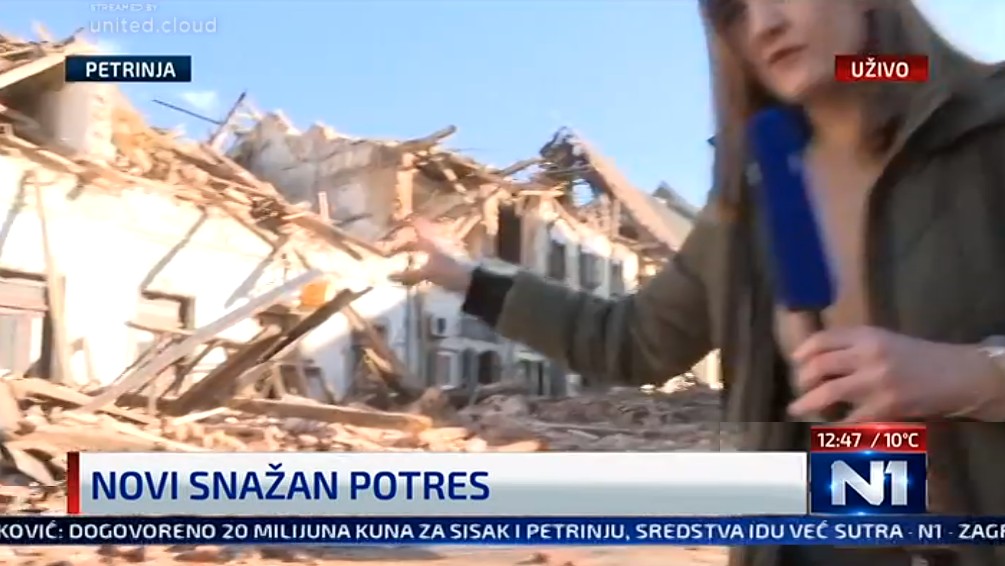 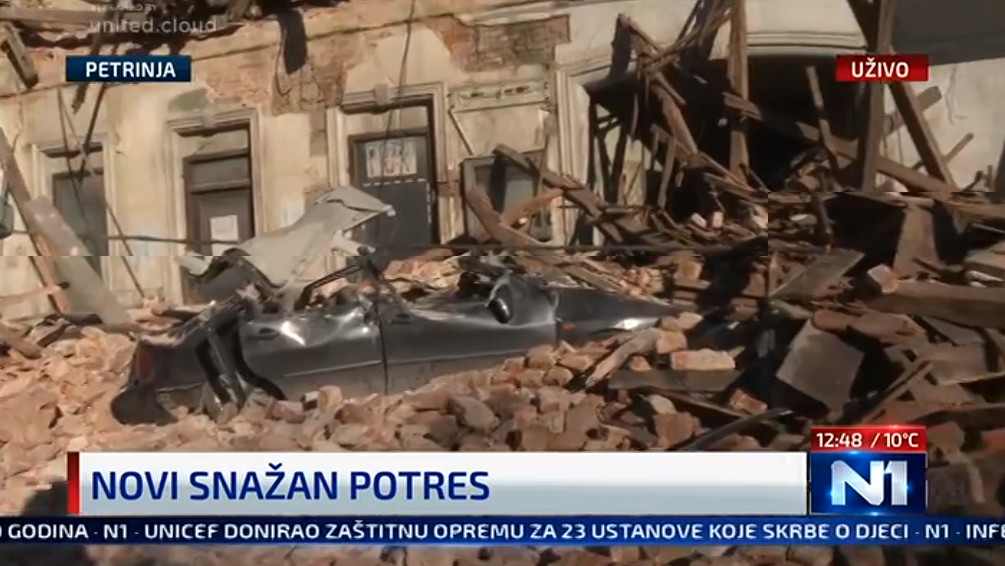 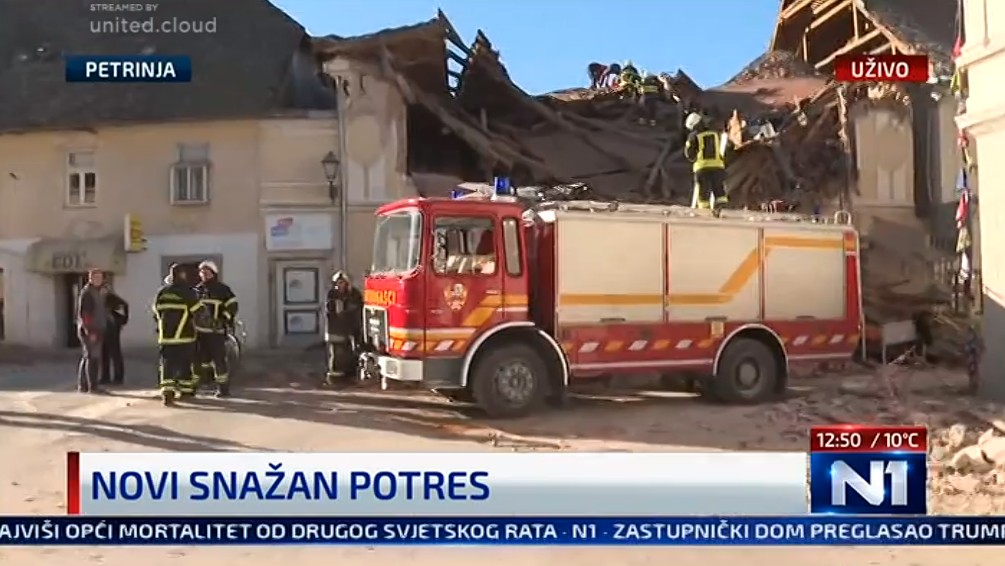 The USGS issued a Yellow alert for shaking-related fatalities. Some casualties and damage are possible.

Orange alert was issued for economic losses. Significant damage is likely and the disaster is potentially widespread. Estimated economic losses are 0-1% GDP of Croatia. Past events with this alert level have required a regional or national level response. 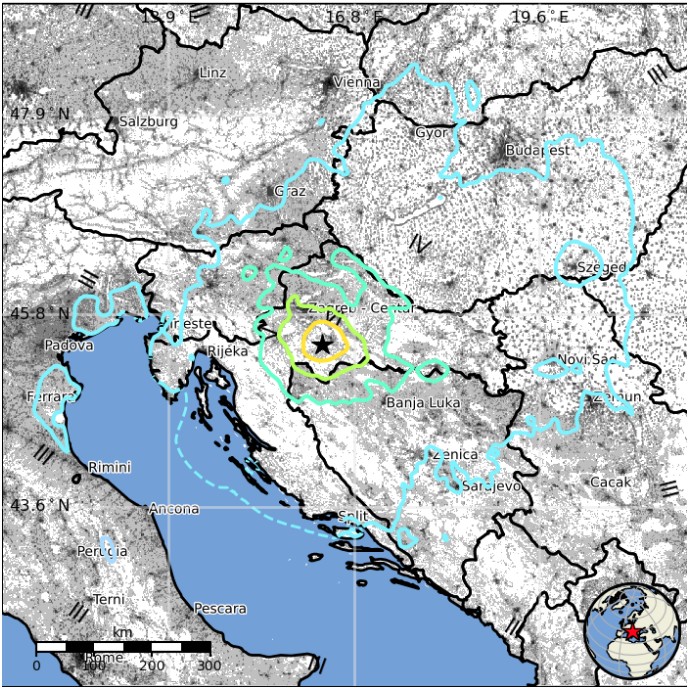 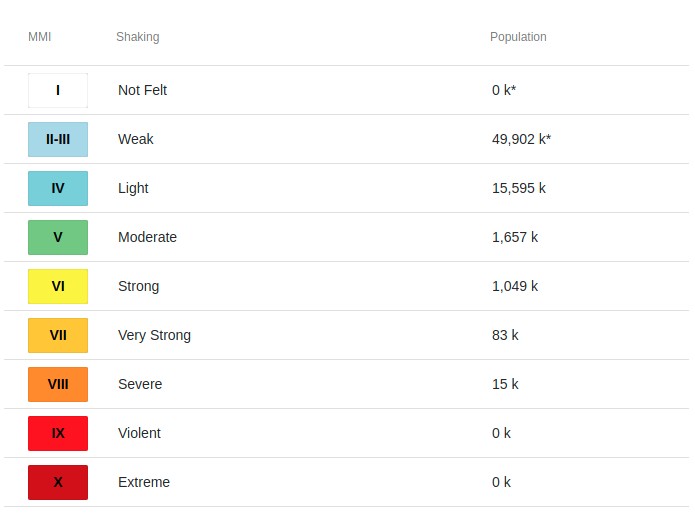 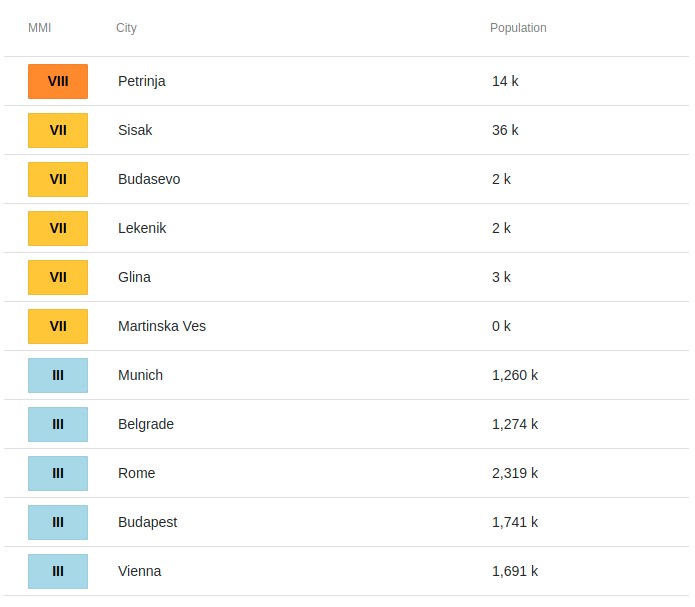 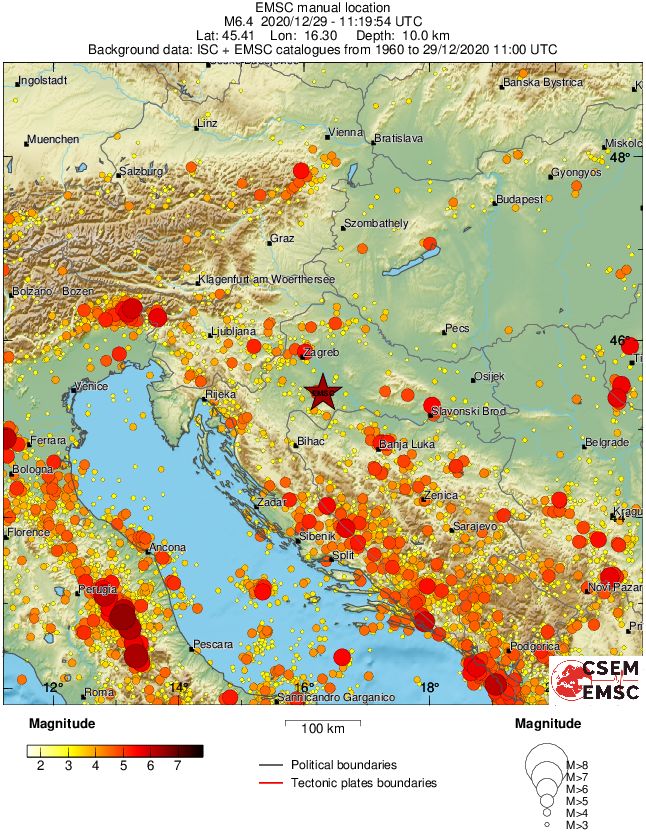 "I want to note something immediately – many buildings have coped quite well with this very sizeable earthquake," said Jame Gurney, founder of the UK Earthquake Bulletin.

"It appears to be buildings which are both poorly built masonry and pre-1900 which have failed catastrophically. The partially collapsed buildings match Type II in the Dowrick et al. (2008) NZ Modified Mercalli Scale revision – ordinary workmanship w/ mortar of average quality.

"The other older buildings look to be Type III – reinforced masonry of good workmanship & sound mortar. As Type II have experienced a partial collapse, and Type III has suffered some damage in some cases, I would estimate intensity in central Petrinja at MM8 on the NZ Revised Modified Mercalli Scale, EMS8 on the European Macroseismic Scale (EMS-98)," Gurney said.

"A final note on the Mw 6.4 Sisak-Petrinja quake in Croatia… The two foreshocks (Mw 4.8, Mw 4.3) produced an aftershock sequence that was deficient in quakes that match Bath's Law (i.e. quakes of M2.8-3.8). This can be a tell-tale sign that they are foreshocks.

"This isn't always the case, but after a "doublet" like that which occurred yesterday morning [December 28] it would probably be expected, especially in a region which doesn't have regular quakes of such size, that an active aftershock sequence would follow."

The only bridge connecting Petrinja with the rest of central Croatia is damaged. Traffic in and out of the city is disrupted and the bridge is still being used, as of 14:20 UTC, although heavily damaged.

The police are cautioning everyone to use it at their own risk. 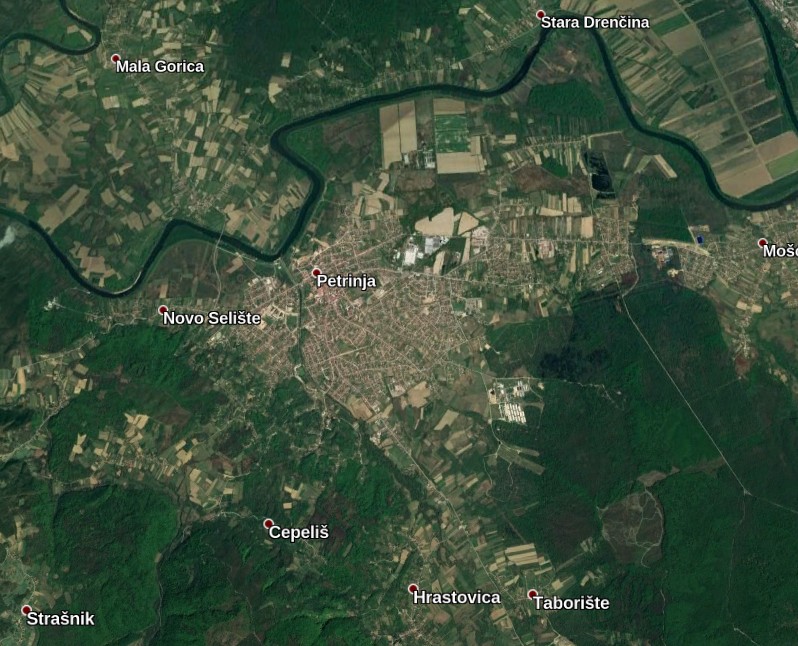 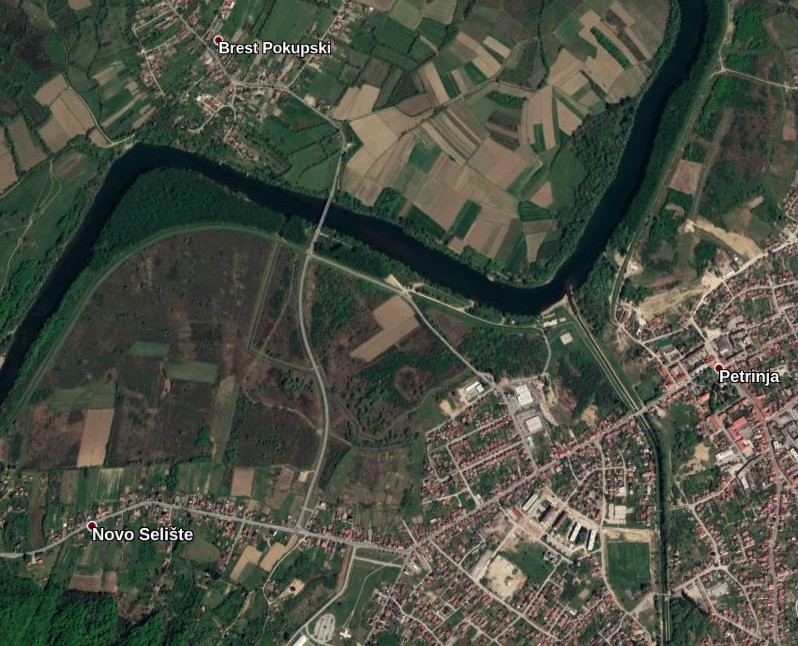 The main bridge connecting Petrinja with the rest of central Croatia. Credit: Google

The main hospital in Petrinja is reportedly almost completely destroyed as well as all buildings in Petrinja city center.

One woman is missing.

Dozens of people have been injured.

The death toll has risen to 5, after three more confirmed deaths in the village of Majske Poljane. Survivors say 90% of houses there were destroyed.

Search and rescue operations are in progress. However, many villages still have people trapped under the rubble.

Authorities are urging residents of this entire region to stay out of homes, especially if they were damaged.

Aftershocks continue and the death toll is expected to continue rising.

The death toll has risen to 7. At least 28 people have been injured.

Hundreds of homes and buildings have collapsed in the epicentral area.

The damage was also reported in the capital Zagreb where the power supply was disrupted and many buildings sustained damage. Zagreb is still recovering from destructive M5.3 earthquake on March 22, 2020, with many people still unable to return to their homes.

This [M6.4] is the largest earthquake to occur in Croatia since the advent of modern seismic instruments.

The quake occurred as a result of shallow strike-slip faulting within the Eurasia Plate. Focal mechanism solutions for the event indicate that rupture occurred on a nearly vertical fault striking either to the southeast or southwest.

The location and depth of the event indicate that this was an intraplate earthquake occurring within the Eurasia plate as opposed to along a major tectonic boundary.

Tectonics of the Mediterranean Sea, in the convergent boundary region between Africa and Eurasia, are complex, and involve the motions of numerous microplates and regional-scale structures.

The Adriatic block immediately west of today’s earthquake is thought to move somewhat independently to Eurasia and Africa, driving surrounding faulting in Italy and along the eastern Adriatic coast from Croatia to Albania.

Many people from Zagreb say they've seen unusually bright yellow color in the sky coming from the direction of Petrinja several hours before the quake — around 07:30 LT (06:30 UTC). Some mention an unusual bright yellow rainbow.

This is one of the images we received: 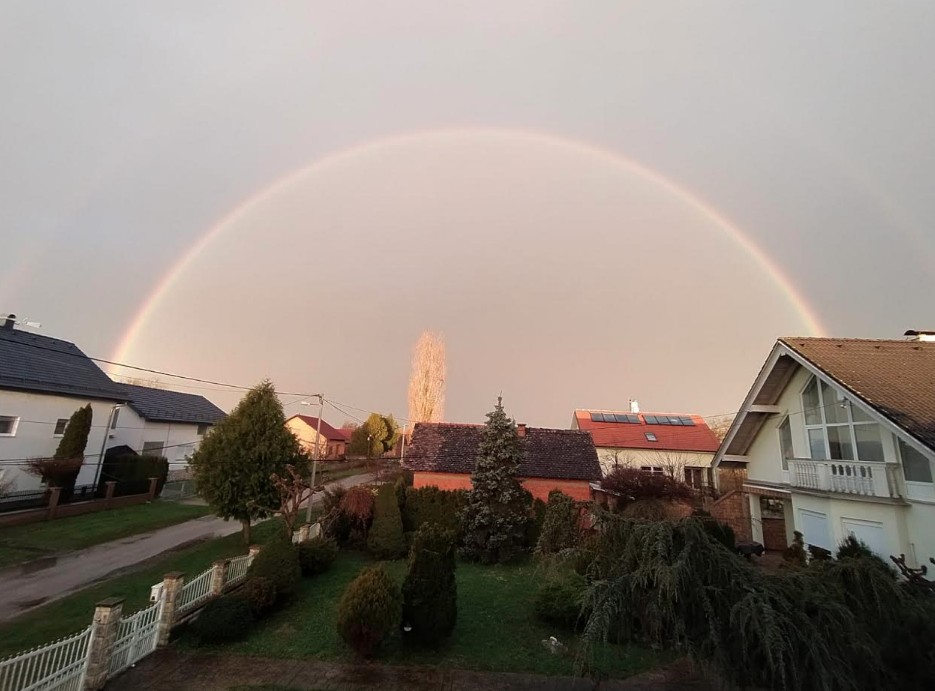 The Croatian Seismological Service acknowledged numerous comments about unusual lights, adding that earthquakes have no connection to lights in the sky.

"More earthquakes are possible. If you live in the affected area stay away from damaged buildings and take care."

The worst affected cities are Petrinja, Sisak, and Glina, and rural areas around them.

116 000 people were directly affected by the earthquake.

56 schools were damaged, of which 9 collapsed, and 30 churches, of which 10 collapsed.