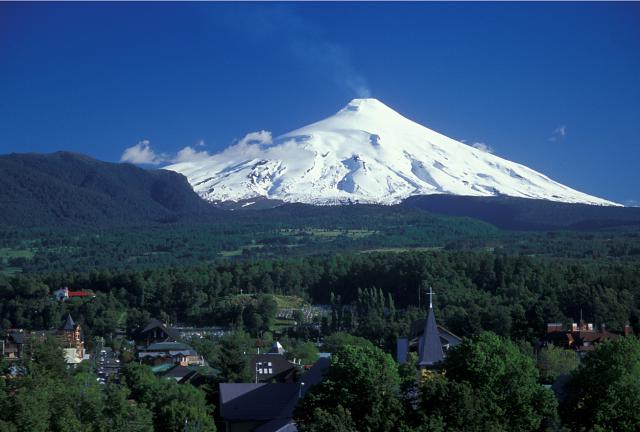 After six months of sleep, Chilean stratovolcano Villarrica has started a new active phase. Weak explosive activity deep within the summit crater has resumed during last 2 weeks as evident in terrestrial and satellite observations. Observations also indicate that magma might have begun to rise again within the volcano. Villarrica rises above the resort town of Pucón.

It is expected that in the coming weeks or months incandescence will be visible again at the crater during the nights. The activity levels are so low, that without the help of satellites it would not have been possible to detect the increase in heat from the crater.

Also, the seasonal melting of ice and snow on the volcano began about 2 weeks ago, producing large volumes of meltwater that drained within and at the base of glaciers. A critical mass of water might have entered the volcano's hydrothermal system. The internal heat evaporates the water in the immediate area of ​​the volcanic conduit and forms condensation on the inner walls above. The condensation phenomenon has been observed in good weather, notably on 16 and 17 January after noon.

The detailed analysis of more than 12,000 daily sequential images indicates that no ash emissions have occurred nor landslides in recent months.

Glacier-clad Villarrica, one of Chile's most active volcanoes, rises above the lake and town of the same name. It is the westernmost of three large stratovolcanoes that trend perpendicular to the Andean chain. A 6-km wide caldera formed during the late Pleistocene. A 2-km-wide caldera that formed about 3500 years ago is located at the base of the presently active, dominantly basaltic to basaltic-andesitic cone at the NW margin of the Pleistocene caldera. 4

More than 30 scoria cones and fissure vents dot Villarrica's flanks. Plinian eruptions and pyroclastic flows that have extended up to 20 km from the volcano have been produced during the Holocene. Lava flows up to 18 km long have issued from summit and flank vents. Historical eruptions, documented since 1558, have consisted largely of mild-to-moderate explosive activity with occasional lava effusion. Glaciers cover 40 sq km of the volcano, and lahars have damaged towns on its flanks.