According to the press release issued on January 17, 2012 NASA demonstrated laser communication with a satellite by beaming image of Leonardo Da Vinci’s iconic painting Mona Lisa 240,000 miles to Lunar Reconnaissance Orbiter (LRO) orbiting the Moon. Lunar Orbiter Laser Altimeter (LOLA) instrument on LRO received the digital image from the Next Generation Satellite Laser Ranging (NGSLR) station through laser pulses. Then LRO reconstructed image and in response returned the it back to the ground station using spacecraft’s radio telemetry system.

This achievement set the stage for the Lunar Laser Communications Demonstration, a high data rate laser-communication demonstrations that will be a central feature of NASA’s next moon mission, the Lunar Atmosphere and Dust Environment Explorer.

So far, radio waves were used for tracking and communication with satellites that went beyond Earth’s orbit. Whereas LRO is an exception  – it is the only satellite in orbit around a body other than Earth to be tracked by laser as well. “Because LRO is already set up to receive laser signals through the LOLA instrument, we had a unique opportunity to demonstrate one-way laser communication with a distant satellite,” says Xiaoli Sun, a LOLA scientist at NASA Goddard and lead author of the Optics Express paper, posted online today, that describes the work.

Precise timing was the key to transmitting the image. Sun and colleagues divided the Mona Lisa image into an array of 152 pixels by 200 pixels. Every pixel was converted into a shade of gray, represented by a number between zero and 4,095. Each pixel was transmitted by a laser pulse, with the pulse being fired in one of 4,096 possible time slots during a brief time window allotted for laser tracking. The complete image was transmitted at a data rate of about 300 bits per second. 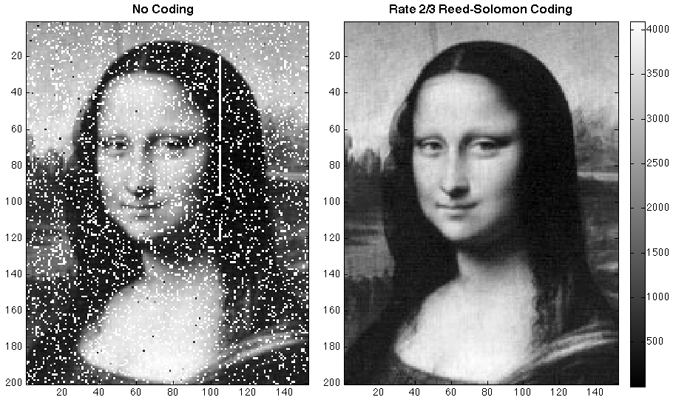 The success of the laser transmission was verified by returning the image to Earth using the spacecraft’s radio telemetry system. Turbulence in Earth’s atmosphere introduced transmission errors even when the sky was clear. The team overcame these effects by employing Reed-Solomon coding, which is the same type of error-correction code commonly used in CDs and DVDs. The experiments also provided statistics on the signal fluctuations due to Earth’s atmosphere. Goddard’s Richard Vondrak, the LRO deputy project scientist said,

“This pathfinding achievement sets the stage for the Lunar Laser Communications Demonstration (LLCD), a high data rate laser-communication demonstrations that will be a central feature of NASA’s next moon mission, the Lunar Atmosphere and Dust Environment Explorer (LADEE).”

Featured image: Screenshot from video – Mona Lisa on the Moon