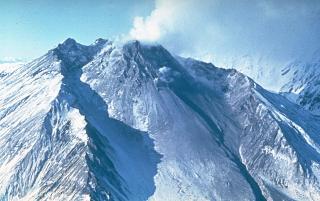 According to visual data, ash plumes rose up to 10 – 12 km (32 800 – 39 400 feet). The explosive phase of eruption continued until 07:45 UTC, and later there was a volcanic tremor was registered about 2 hours. There is no ash near Bezymianny volcano at now, but ash plumes are extending to the east-north-east of the volcano about 550-600 km of the volcano.

By 21:32 UTC ash plumes were extending to the east-north-east of the volcano about 600 km (370 miles) of the volcano. As of September 2nd the Aviation color code is back to Orange from Red and the eruption of the volcano is gradually finishing.

Three periods of intensified activity have occurred at Bezymianny during the past 3000 years. The latest period, which was preceded by a 1000-year quiescence, began with the dramatic 1955-56 eruption. This eruption, similar to that of Mount St. Helens in 1980, produced a large horseshoe-shaped crater that was formed by collapse of the summit and an associated lateral blast. Subsequent episodic but ongoing lava-dome growth, accompanied by intermittent explosive activity and pyroclastic flows, has largely filled the 1956 crater.

Bezymianny volcano is one the most active volcano in the world. 43 Vulcanian-type strong explosive eruptions of Bezymianny occurred in 1965-2012, while 20 of them producing ash up to 10-15 km.