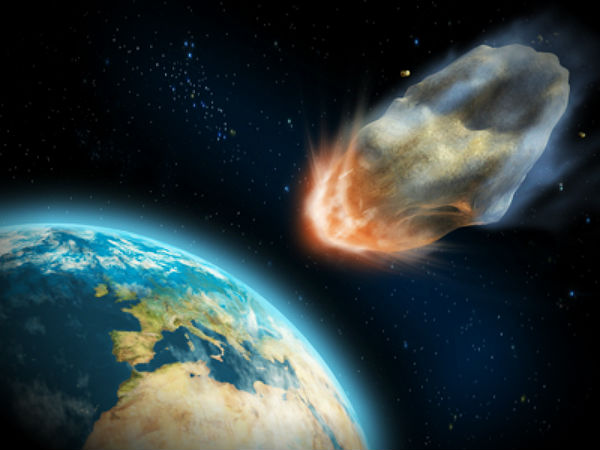 This near-Earth asteroid was discovered on February 22, 2012, by LaSagra Observatory in the mountains of Andalusia in southern Spain. Asteroid 2012 DA14 is thought to be about 45 meters in diameter and his estimated mass about 130,000 metric tons.

Its orbit is almost circular but still elliptical enough to pass near Earth two times per year. The preliminary orbit shows that 2012 DA14 has a very Earth-Like orbit with a period of 366 days. On February 16, 2012, it was about 2.5 million km (1.5 million miles) away (about 6 times the distance to the Moon). 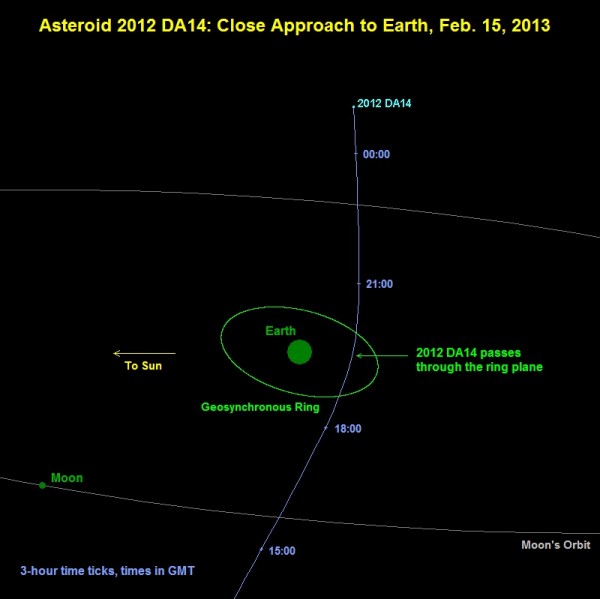 The Asteroid 2012 DA14 will pass below the distance where many commercial satellites are flying – inside the geosynchronous satellite ring, located about 35 800 km above the equator. The nominal pass will be 0.00023 AU (34 000 km; 21 000 miles) from the center-point of the Earth.

It is expected that the asteroid will travel rapidly from the southern evening sky into the northern morning sky on February 15, 2013. About 4 minutes after its Earth close approach, there is a good chance it will pass into the Earth's shadow for about 18 minutes or so before reappearing from the eclipse. When traveling rapidly into the northern morning sky, 2012 DA14 will quickly fade in brightness.

If the orbit that has been derived from the available data is accurate, during the closest approach, 2012 DA14 will be visible from Europe and Asia as an 6 – 7th magnitude star, crossing the sky from the southwest to the northeast at a speed of almost one Moon diameter per minute. It won't be visible by naked eye, but it is possible that it could be seen by binoculars.

Asteroid 2012 DA14, discovered on February 22, 2012, moved very fast, having just passed relatively close to Earth. It was moving at about 11 arcseconds per minute and had a visual magnitude of 18.8. (Courtesy Jaime Nomen, La Sagra Observatory)

For now, the orbit of 2012 DA14 is such that it will not crash into Earth for the foreseeable future. It rates 0 (No Hazard) on the Torino scale. 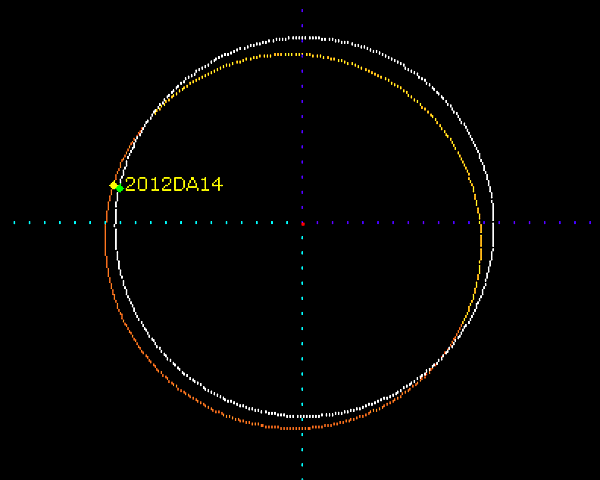 In this plot, the asteroid is the yellow dot, and Earth is green; the two orbits intersect twice per year. (Credit: Deimos-Space)

Some scientists believe that similar-in-size object hit Tunguska in 1918. If it were to strike the Earth, it is estimated that it would produce the equivalent of 2.4 megatons of TNT. The Tunguska event has been estimated at 3−20 megatons.

Observing 2012 DA14 will provide a good test as we anticipate the 2029 flyby of Apophis, a bigger asteroid (around 270 meters) that is expected to have a very close encounter too, at around 36,000 kilometers. 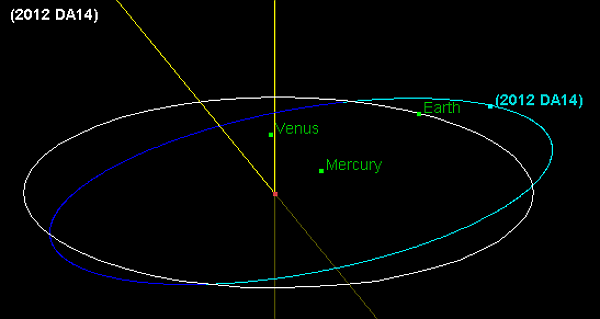 On the day of asteroid 2012 DA14 flyby (some 18 hours before its closest approach to Earth) an asteroid exploded over Russia and Kazakhstan injuring over 1 000 people. Read the full report here: