Its flyby is the closest ever predicted Earth approach for an object this large (first estimates 45 m) which makes it such an interesting NEO. It is traveling at about 17 450 miles per hour (28 100 kilometers per hour), or 4.8 miles per second (7.82 kilometers per second) relative to Earth, and by latest estimates, it is about 65 meters in diameter.

At the time of closest approach, the asteroid will be over the eastern Indian Ocean, off Sumatra — approx. latitude: -6 deg South. / longitude: 97.5 deg East. Depending on local weather, it will be visible from parts of Europe, Africa and Asia.

2012 DA 14 will appear to be moving relatively quickly as it crosses the sky from the south to the north, it will be too faint to be visible to the naked eye, but it can be picked up with a good pair of binoculars. 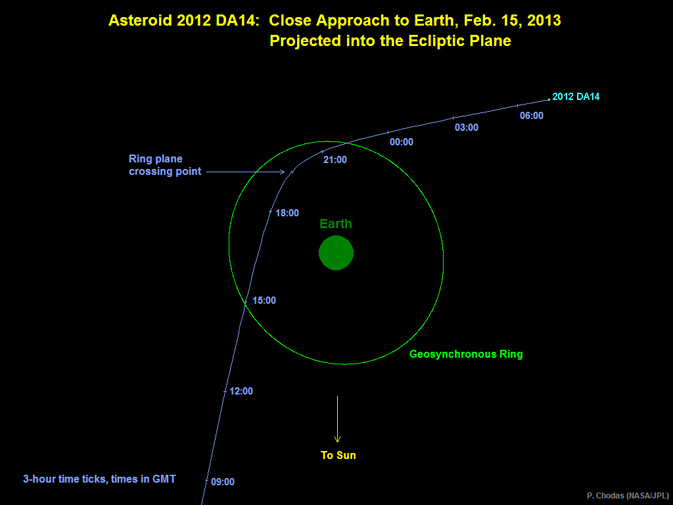 The graphic depicts the trajectory of asteroid 2012 DA14 on Feb 15, 2013. In this view, we are looking down from above Earth's north pole. Image credit: NASA/JPL-Caltech

At the time of closest approach, asteroid 2012 DA 14 will be only about 17 200 miles (27 700 kilometers) above Earth's surface. This distance is well outside Earth's atmosphere, but it is inside the belt of satellites in geostationary orbit, which is located 22 200 miles (35 800 kilometers) above Earth’s surface. The close-approach distance is only about one-tenth the distance between Earth and the moon or about twice the diameter of the Earth.

Need help converting times to your local time? – Use this tool.

What would happen if 2012 DA 14 would impact the Earth

It is believed that there are approximately 500 000 near-Earth asteroids the size of 2012 DA14. Of those, less than one percent have been discovered. Scientists at NASA's Near-Earth Object Program Office in Pasadena, Calif. estimate that an asteroid the size of 2012 DA14 flies this close every 40 years on average and that one will impact Earth, on average, about once in every 1 200 years.

Asteroid 2012 DA14 will not impact Earth, but if another asteroid of a size similar to that of 2012 DA14 (about 150 feet across) were to impact Earth, it would release approximately 2.5 megatons of energy in the atmosphere and would be expected to cause regional devastation.

A comparison to the impact potential of an asteroid the size of 2012 DA14 could be made to the impact of a near-Earth object that occurred in 1908 in Tuguska, Siberia. Known in the asteroid community as the "Tunguska Event," this impact of an asteroid just slightly smaller than 2012 DA14 (approximately 100 – 130 feet/30-40 meters across) is believed to have flattened about 750 square miles (1,200 square kilometers) of forest in and around the Podkamennaya Tunguska River in what is now Krasnoyarsk Krai, Russia.