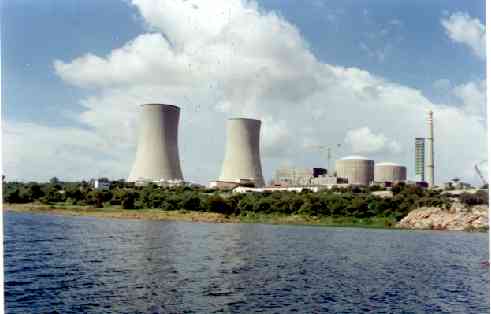 More than 40 workers at a nuclear power station in northern India have been exposed to tritium radiation in two separate leaks in the past five weeks. The first accident occurred on June 23, 2012 when 38 people were exposed during maintenance work on a coolant channel at the Rajasthan Atomic Power Station in Rawatbhata, senior plant manager Vinod Kumar said.

Two of them received radiation doses equivalent to the annual permissible limit, he said, but all those involved have returned to work.

In a second incident last Thursday, July 20, 2012 another four maintenance workers at the plant were exposed to tritium radiation while they were repairing a faulty seal on a pipe. India is on a nuclear power drive, with a host of plants based on Russian, Japanese, American and French technology under consideration or construction.

The country’s growing economy is currently heavily dependent on coal, getting less than 3% of its energy from its existing atomic plants, and the government hopes to raise the figure to 25% by 2050. But environmental watchdogs have expressed concerns about safety in India, where small-scale industrial accidents due to negligence or poor maintenance are commonplace and regulatory bodies are often under-staffed and under-funded.

The director of the Rajasthan power station, C.P. Jamb, confirmed the second accident to AFP but said the radiation was within permissible limits and posed no health threat. “The workers were exposed to radiation from 10 to 25 per cent of the annual limit,” Jamb said. “Such minor leakages keep on happening but they cause no harm.” C.D. Rajput, director of the unit where the leak happened, also said the radiation exposure “was well under the limits and all the workers are working normally”. No explanation was immediately available as to why the first incident at the plant took a month to emerge.