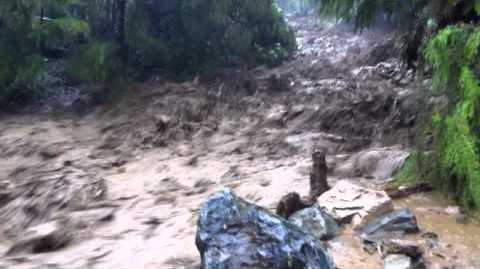 Torrential rain that exploded over the Western Bay of Plenty closed one of the region’s major highways and left people stranded at home as floodwaters rose and rivers burst their banks. A heavy rain warning is in place and flooding is expected to affect a number of Western Bay roads until midday today. All areas of the Western Bay fell victim to the ferocious weather but northern areas were the hardest hit. A family was trapped in its Karangahake Gorge home yesterday after the Ohinemuri River burst its banks. The state highway was closed where the floodgates were up at Criterion Bridge.

Along the gorge, the swollen river spilled over the barrier and over both lanes of traffic. Wendy Hillerich said in her 23 years in the gorge, she had never experienced conditions as extreme as they were yesterday. “I have never seen it this bad. The river is across both lanes and there’s no way anyone is getting through at the moment,” she said.

“We’re totally stranded. There’s no way we can move in any direction.” People in Waihi Beach were stranded as both roads heading into and out of the town were closed for the afternoon and evening. Waihi Beach Rd closed about 3pm while the Athenree Gorge closed shortly after because of a slip. One lane in the gorge was re-opened about 8pm. An NZ Transport Agency (NZTA) spokesperson said a work crew were due to begin to clean up the slip today. NZTA advised motorists to use State Highway 29 via Tauranga over the Kaimai Range and avoid SH2 until floodwaters recede.

At the Waihi Beach Top 10 Holiday Park, owner Ian Smith said the heavy rain in Waihi caused serious flooding at the northern end of the beach. He said the rain had caused the Waihi Beach stream to overflow and caused quite a lot of damage to the park. Traffic was delayed in Katikati after flooding on SH2, south of the Uretara Stream bridge, forced one lane to close for the afternoon. North of the township motorists had to negotiate knee-deep water across the highway. The jetty at The Landing on Beach Rd was completely submerged and the Haiku Reserve at the back of Katikati’s central business district was flooded with water lapping the top of the Haiku pedestrian bridge.

Katikati College and Katikati Primary Schools closed early due to the threat of further flooding. The high tide at 10pm yesterday was likely to affect the Uretara, Criterion and Hikuai Bridges. NZTA said this could result in further closures of the bridges. In Papamoa, flooding caused the northbound lane of SH2 to close between Bruce Rd and Domain Rd last night. NZTA Bay of Plenty state highway manager, Brett Gliddon, said the heavy rain and surface flooding caused a number of potholes in areas that were resealed last week. At 9pm yesterday he said contractors were on site to repair the road. “Repairs are being carried out as quickly as possible to enable the highway to be restored to two lanes by morning. We ask motorists to reduce their speed and take extreme care when travelling in this area,” he said. In Tauranga City almost 100mm of rain fell from 7am to 7pm yesterday. Similar levels were expected to fall last night before the rain was due to ease today. MetService forecaster Mad Naeraa said the worst of the weather had passed but it would take some time for the surface flooding and rivers to subside.

An update from the Met Service

Heavy rains have eased but roads remain closed around the Coromandel Peninsula and Bay of Plenty due to slips and flooding.The MetService has lifted a heavy weather warning for the Coromandel, however a warning remains in place for the Bay of Plenty and Gisborne. In the 21 hours up until 6pm tonight, 90-130mm is expected in the Gisborne region, with the heaviest falls north of Tokomaru Bay, and inland and south of Gisborne city.

The MetService advised people in these areas to watch out for surface flooding, slips and rapidly rising streams and rivers. Roads around the Coromandel Peninsula and the Bay of Plenty remain closed following heavy rain yesterday. Slips closed State Highway 25 at Te Puru, north of Thames, and Te Rerenga, between Coromandel town and Whitianga. State Highway 26 is closed at the Criterion Bridge in Paeroa and between Te Aroha and Paeroa, due to flooding. The Karangahake Gorge, which connects Paeroa and Waihi, is also still closed due to flooding, while SH2 is down to one lane in the Athenree Gorge.

NZTA Bay of Plenty state highway manager, Brett Gliddon, said State Highway 2 is down to one-lane between Bruce Road and the Domain Road intersection at Papamoa due to flooding. “Contractors worked through the night to try and repair pot holes that had formed because of the flooding, but the northbound lane is still closed and a short detour is in place,” Mr Gliddon said.

“The highway is likely to remain only one lane for most of today. Until the flooding subsides, further repairs cannot be undertaken. Once the water recedes we will work as quickly as possible to restore the highway to two lanes. We ask motorists to reduce their speed and take extreme care when travelling in this area.” Kauaeranga Valley Road, Wentworth Valley Road in Parakiwai, and Old Maratoto and Wires road in Hikutaia, are also closed due to flooding.